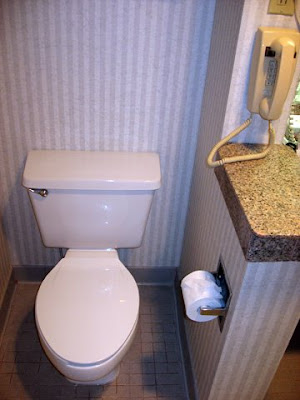 We stayed at a very nice Comfort Inn in King of Prussia, Pennsylvania, just outside the entrance to Valley Forge Park. I love that name: King of Prussia, Pennsylvania. You don't get that much... towns named for the generic title of some royal person.  It's so matter of fact. There's no King of France, Kentucky, for instance. It's Louisville. Anyway, the Comfort Inn was equipped with what must have been the height of business luxury before the advent of cell phones: the phone-next-to-the-toilet-in-the-bathroom. No CEO would want to be caught with his pants down (so to speak) and not be able to take an important call to shore up the Magruder deal, so his loyal gal Friday would book him the suite with phone-next-to-the-toilet-in-the-bathroom. It seems rather quaint now. And I know there's good joke with Line number 1 and Line number 2... I just can't figure out what it is.
Posted by Gunnar and Sherry at 4:42 PM