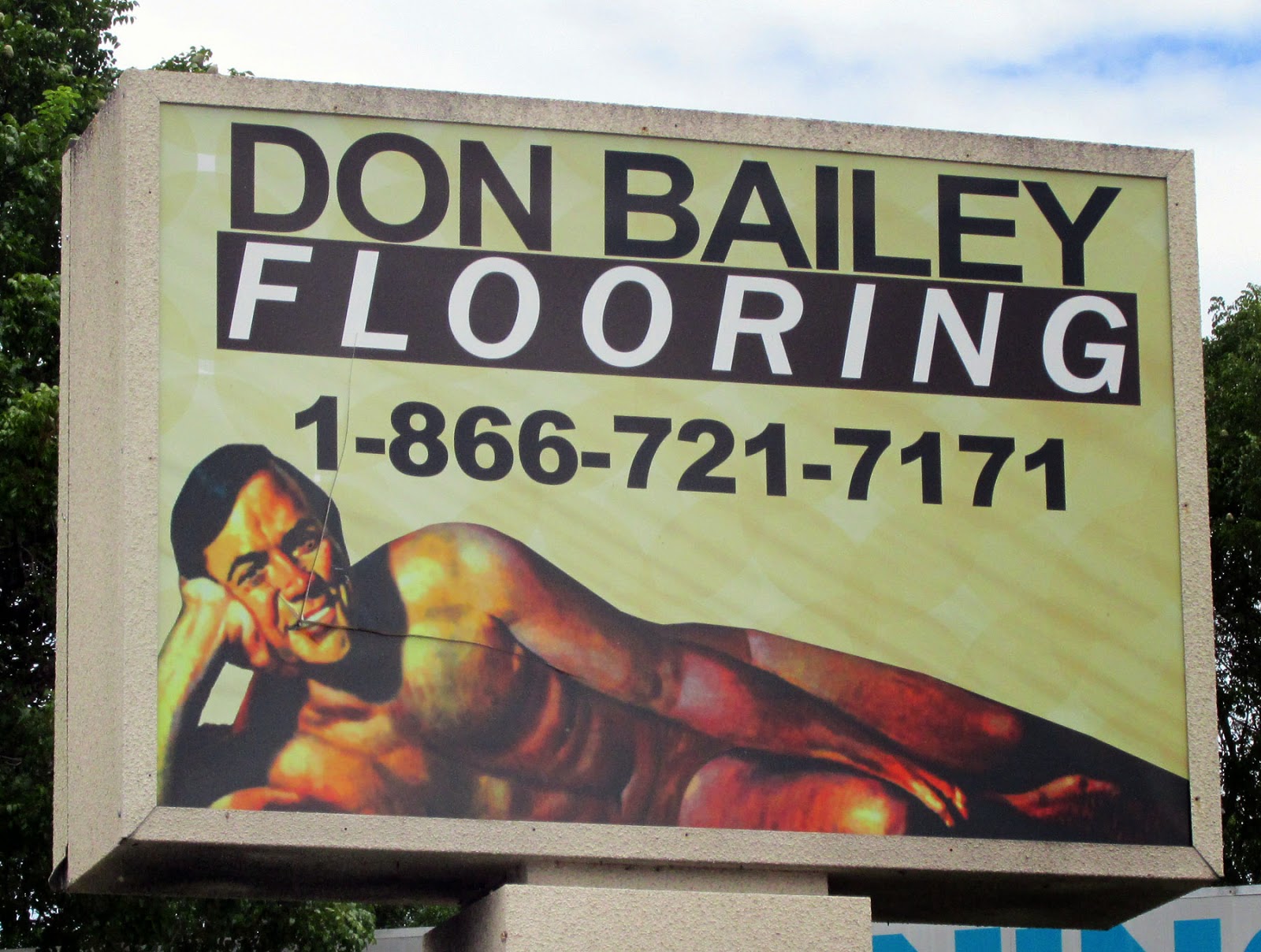 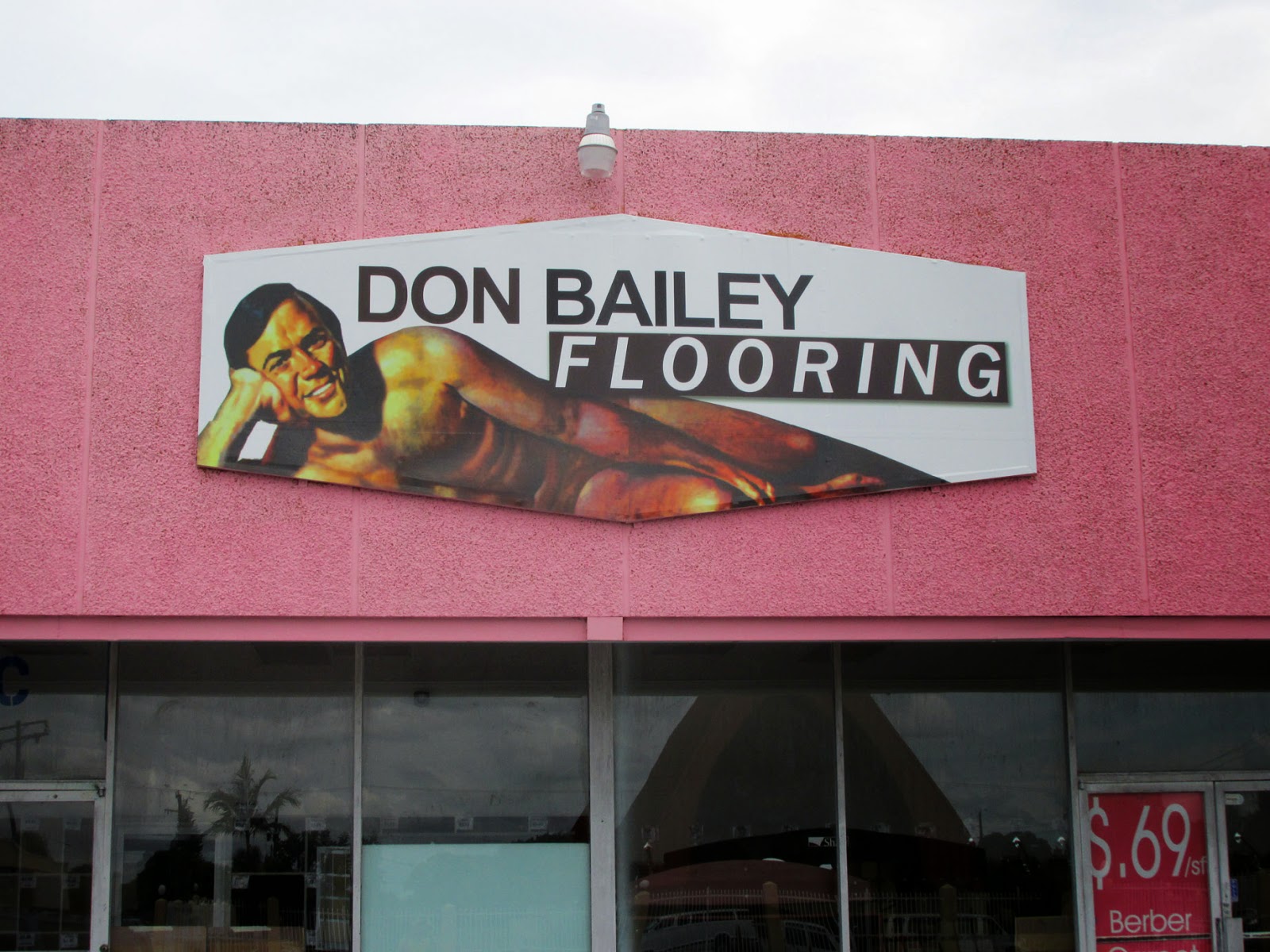 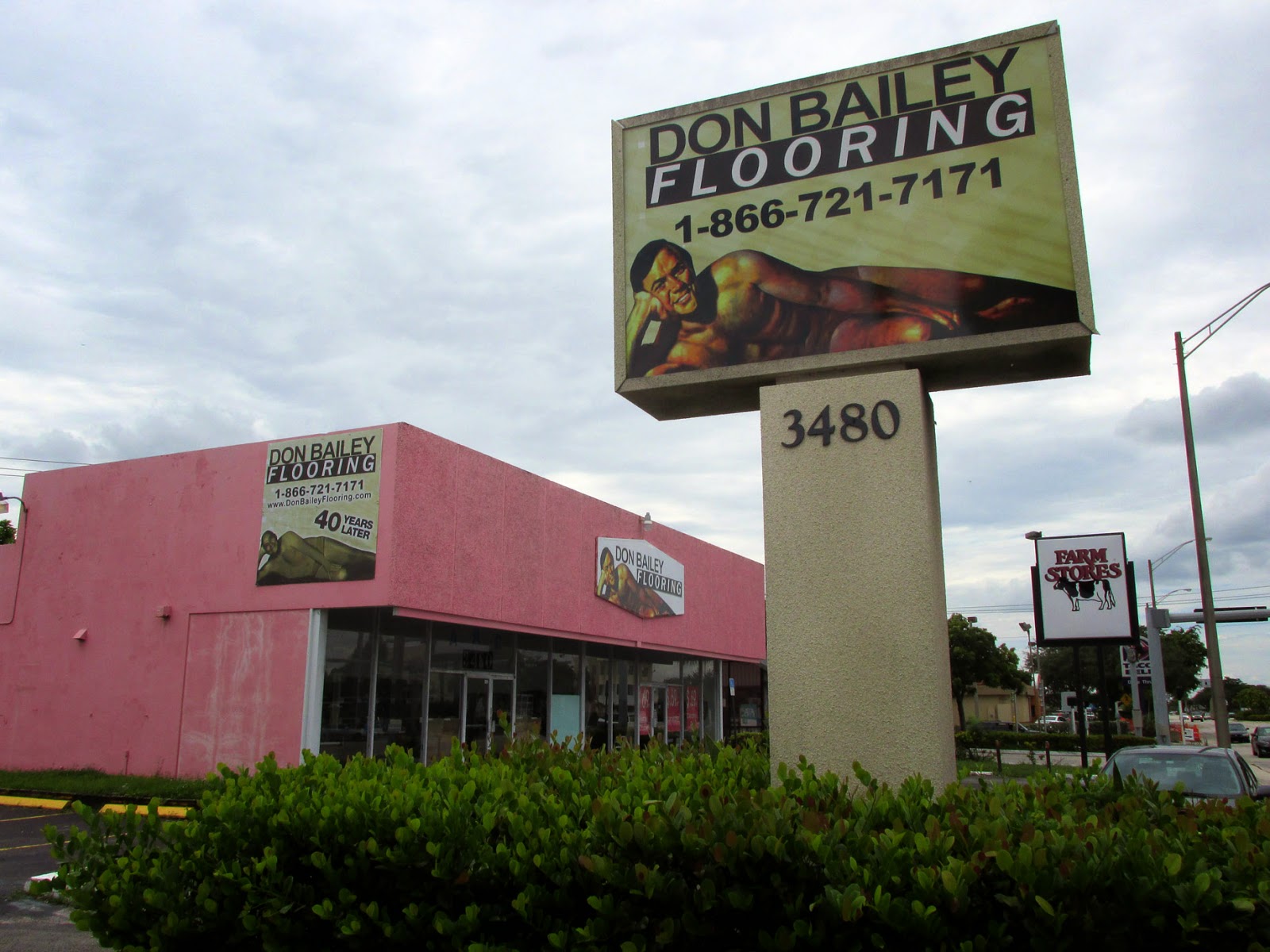 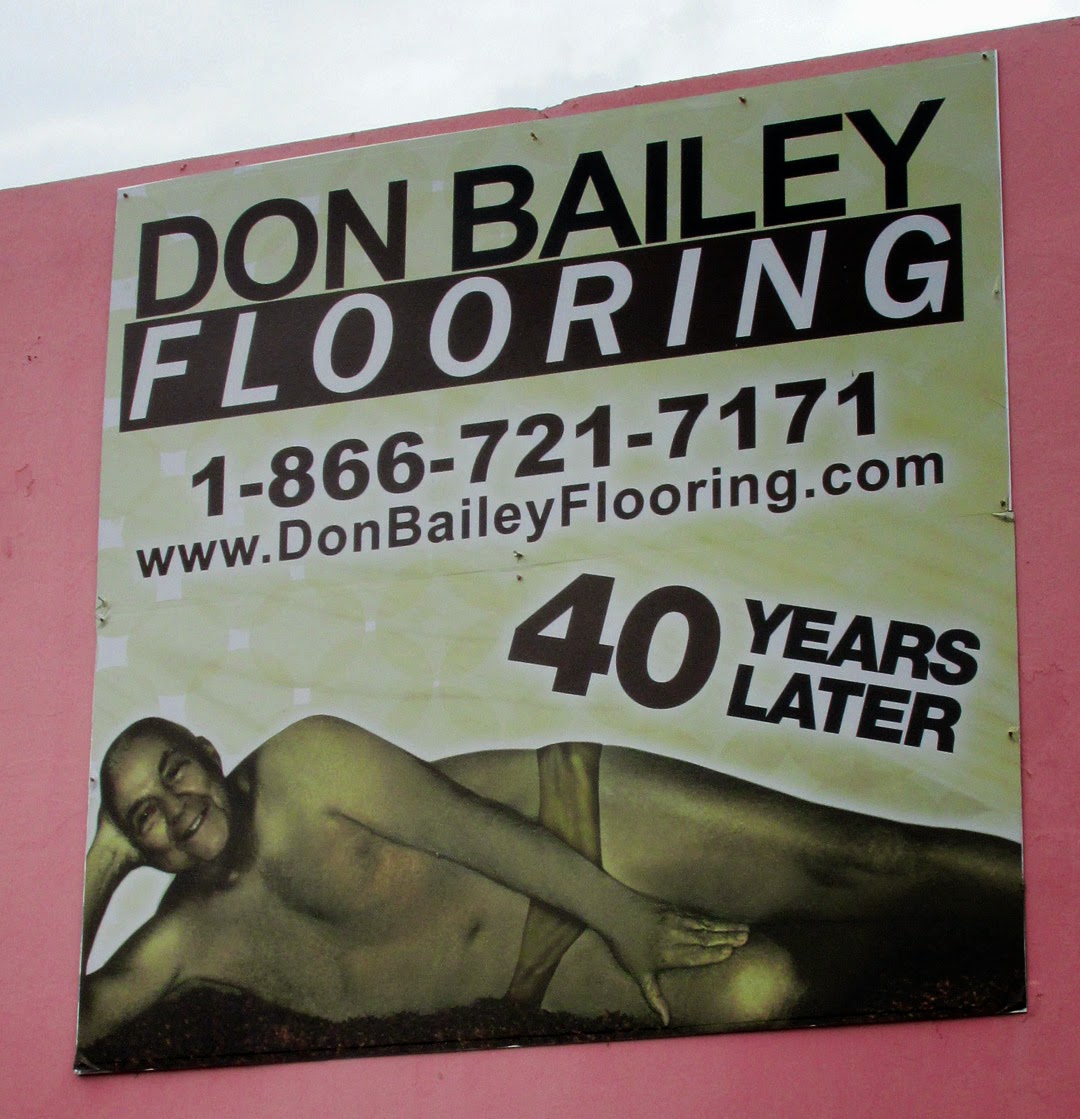 If you're going to emulate someone, you could do a lot worse than the great Burt Reynolds, you know.


Eccentric Roadside recently moved from its home base in Rhode Island to Bradenton, Florida, and then a couple of months later to southeastern Florida and I think I speak for the blog when I say, boy are we tired of moving. We're slowly getting acquainted with our new region, called South Florida by the natives, and the eccentric roadside wonders it has to offer. Case in point: Don Bailey Flooring, a chain of carpet and flooring stores from Miami to Deerfield Beach. What's so eccentric about a flooring store, you ask? Well, the sign, for one. It depicts its namesake, Mr. Bailey, posed ala 1972 Cosmopolitan magazine centerfold Burt Reynolds. As a non-native driving past their Fort Lauderdale emporium, I really had to do a double take. Now there's something you don't see everyday, I says to myself. Turns out Mr. Bailey went into the flooring store business the same year the Cosmo centerfold was published and his borrowing of the idea for his corporate identity turned his business around and made him a controversial local celebrity. Burt's people saw it and complained that Bailey had taken his head and put it on Burt's body, which Bailey disputed. In 1988, the city commissioner in nearby Miramar tried to get Don to cover up and remove his signs and billboards, but she stopped complaining when Don donated the carpet for Miramar's youth center. To celebrate the 40th anniversary of the sign in 2012, Don, then 78, posed again in his Speedo, looking, well...we all get old, you know (check out a video here). But good for him for seizing the day, or, bare with me here, carpet diem.

Posted by Gunnar and Sherry at 2:52 PM 3 comments: 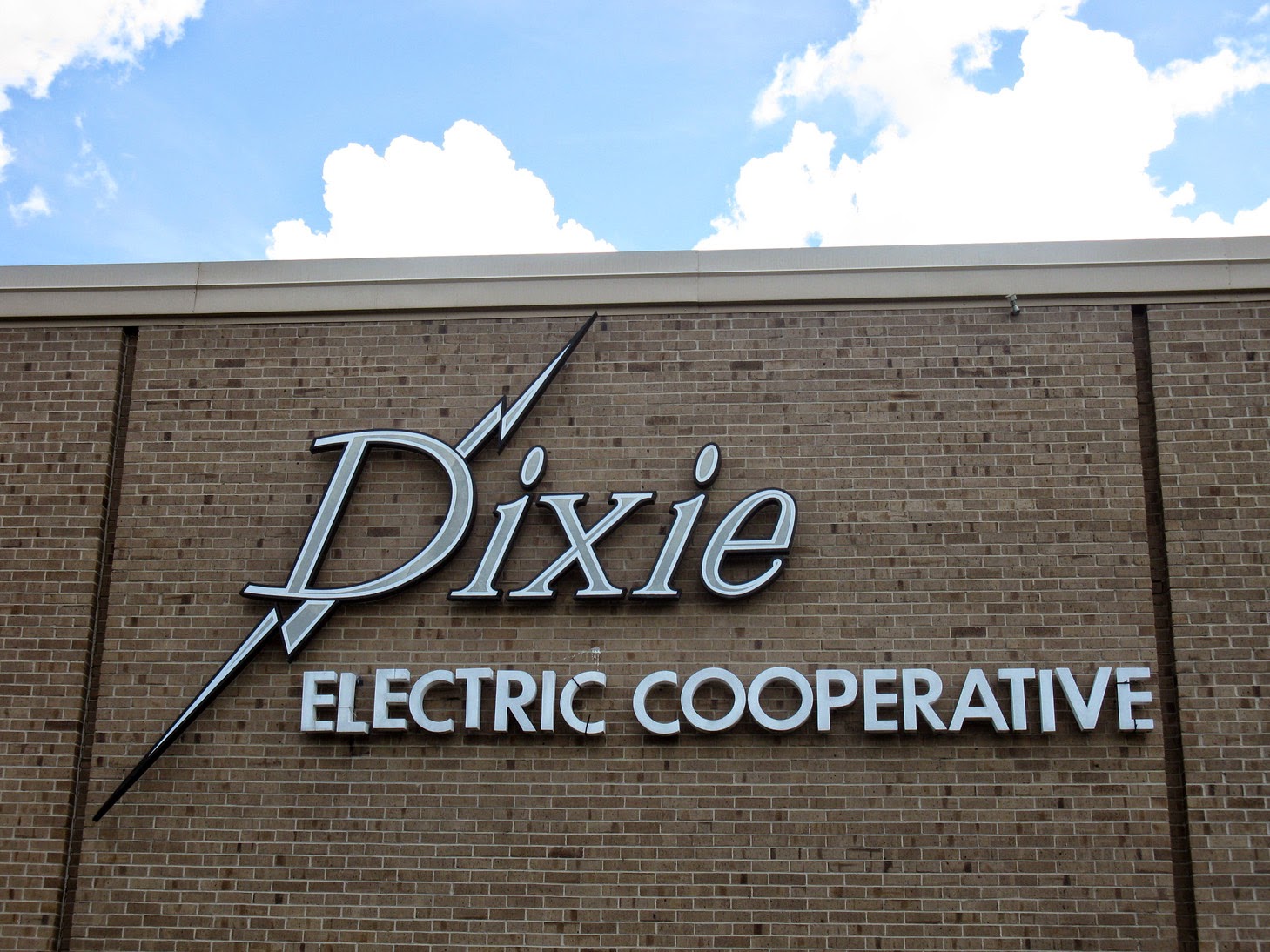 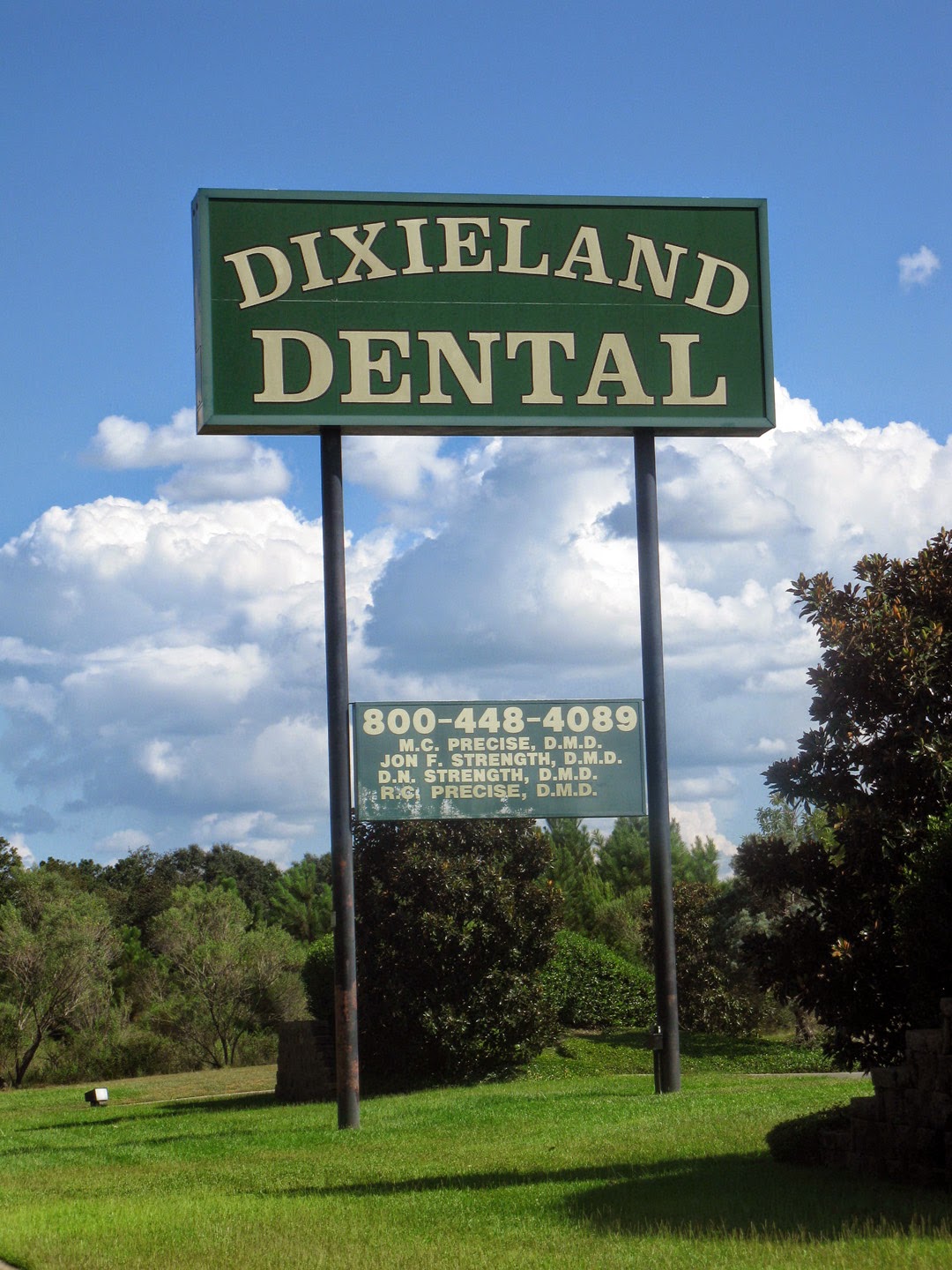 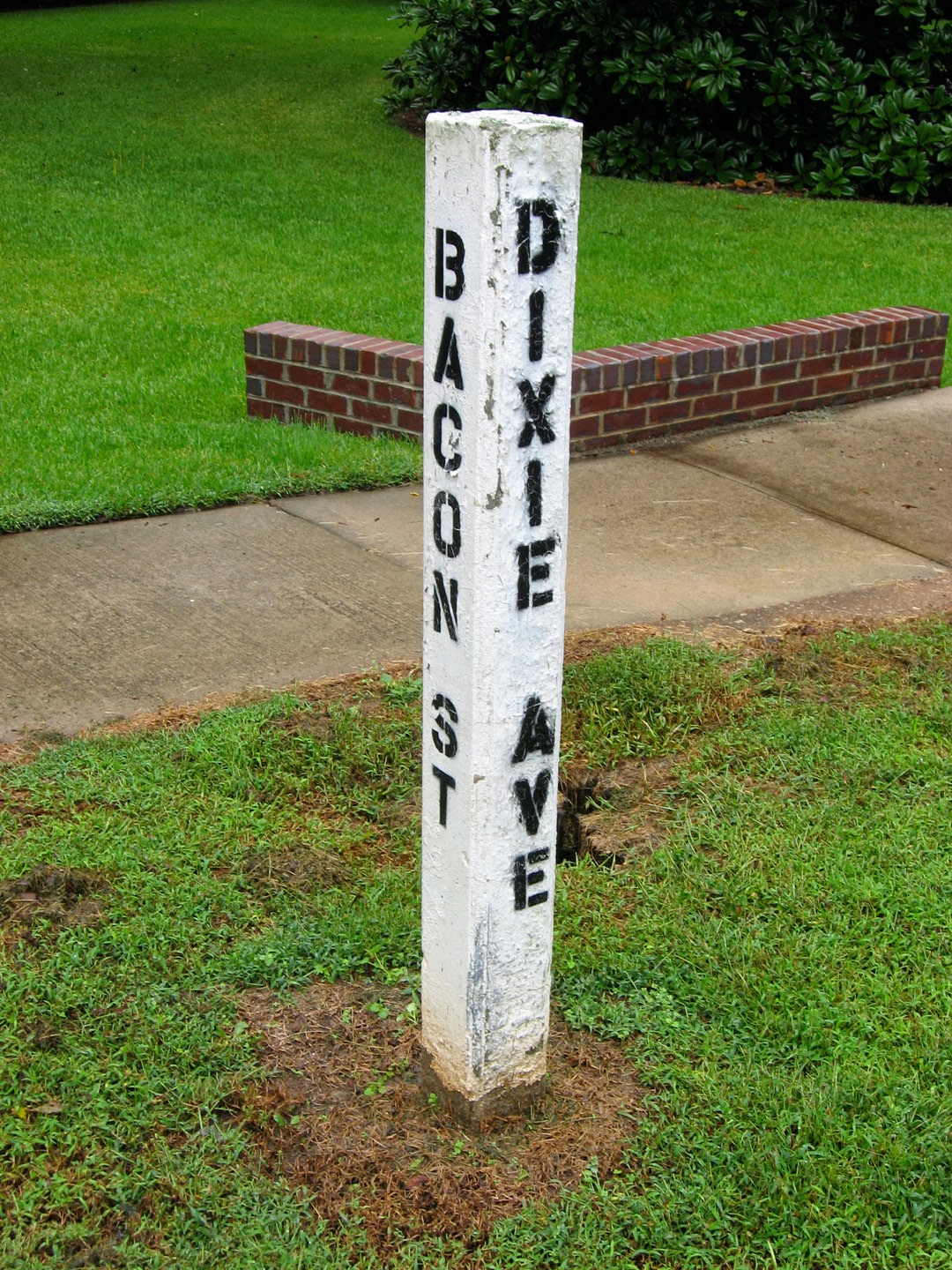 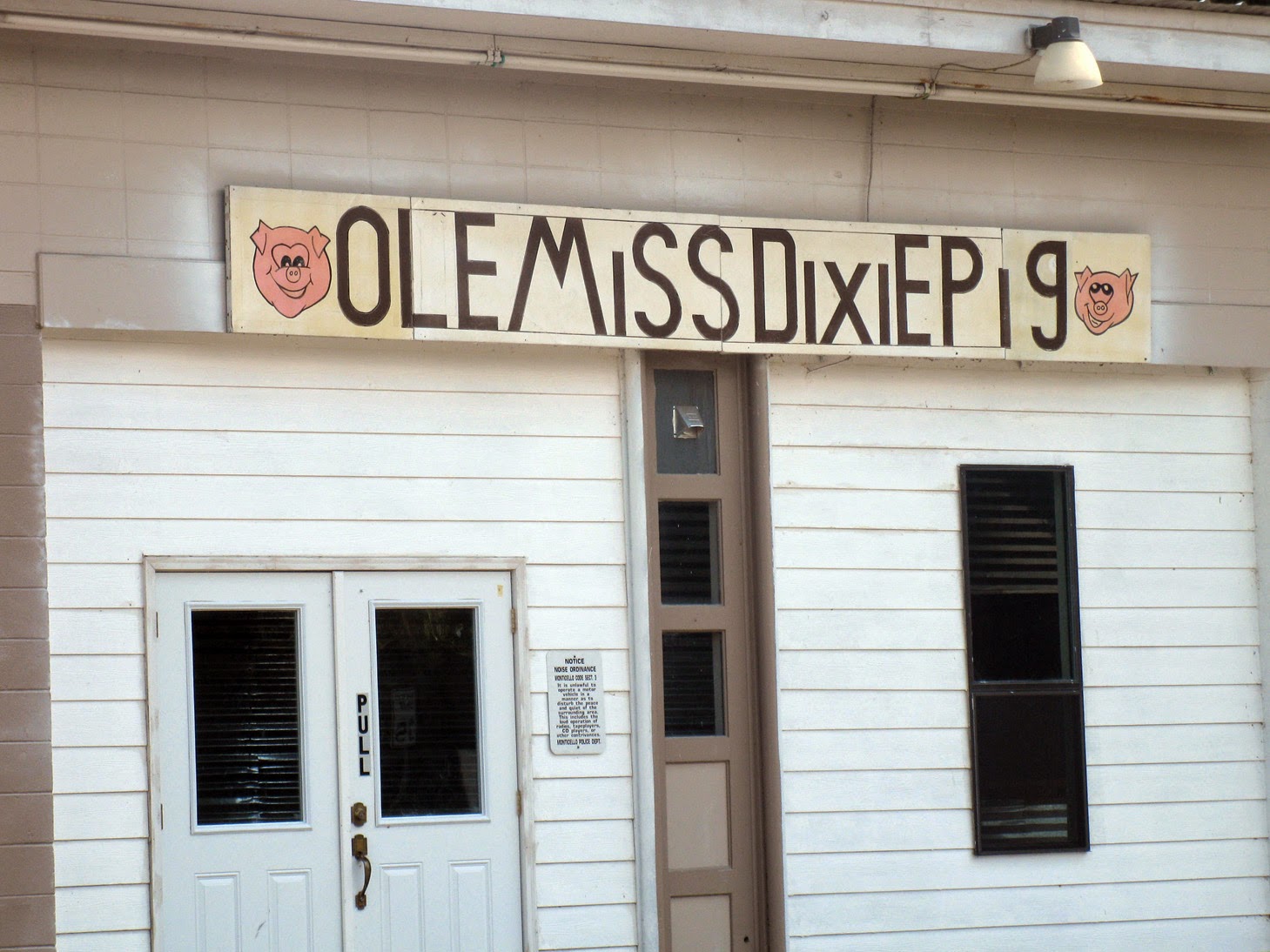 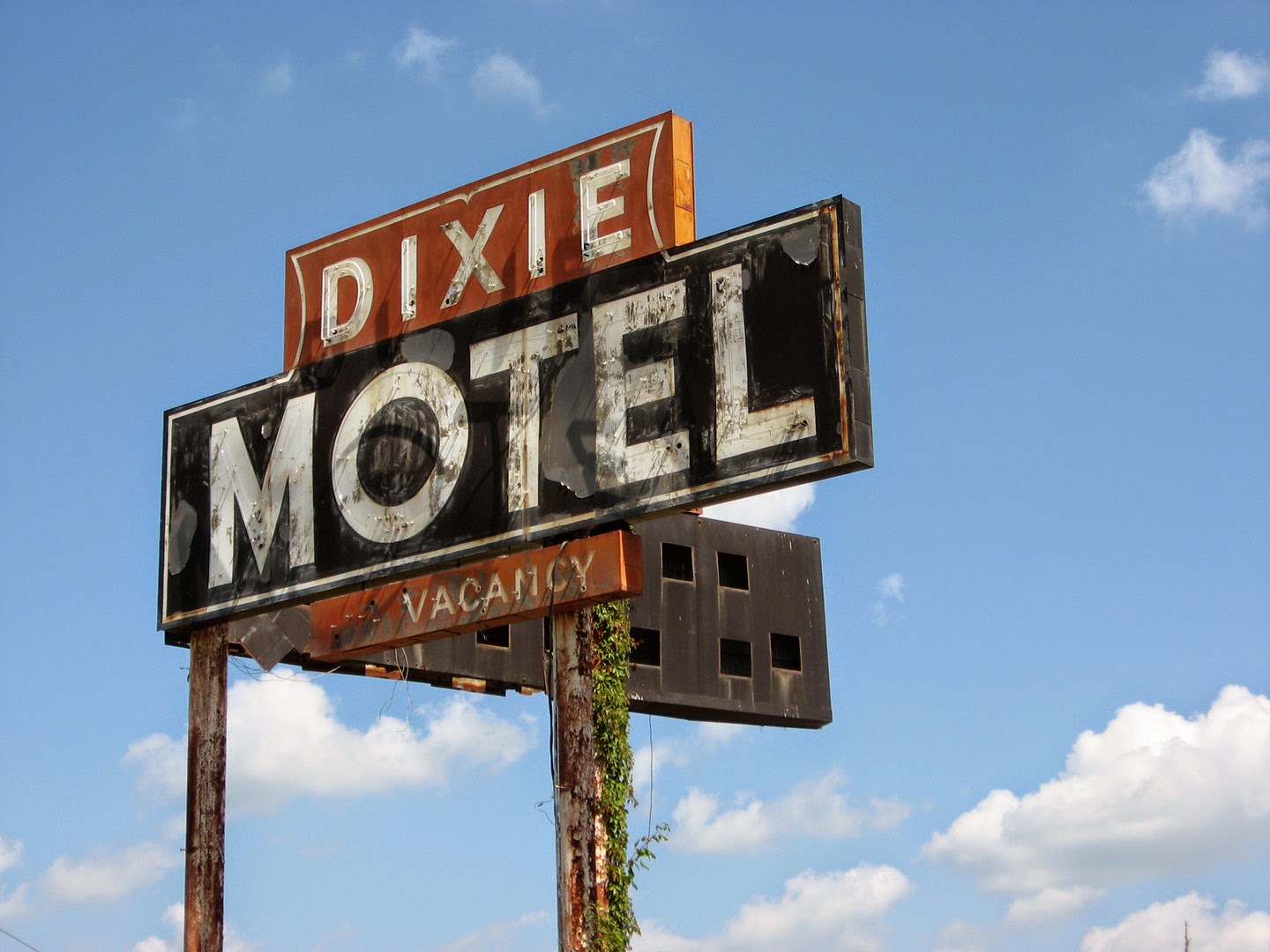 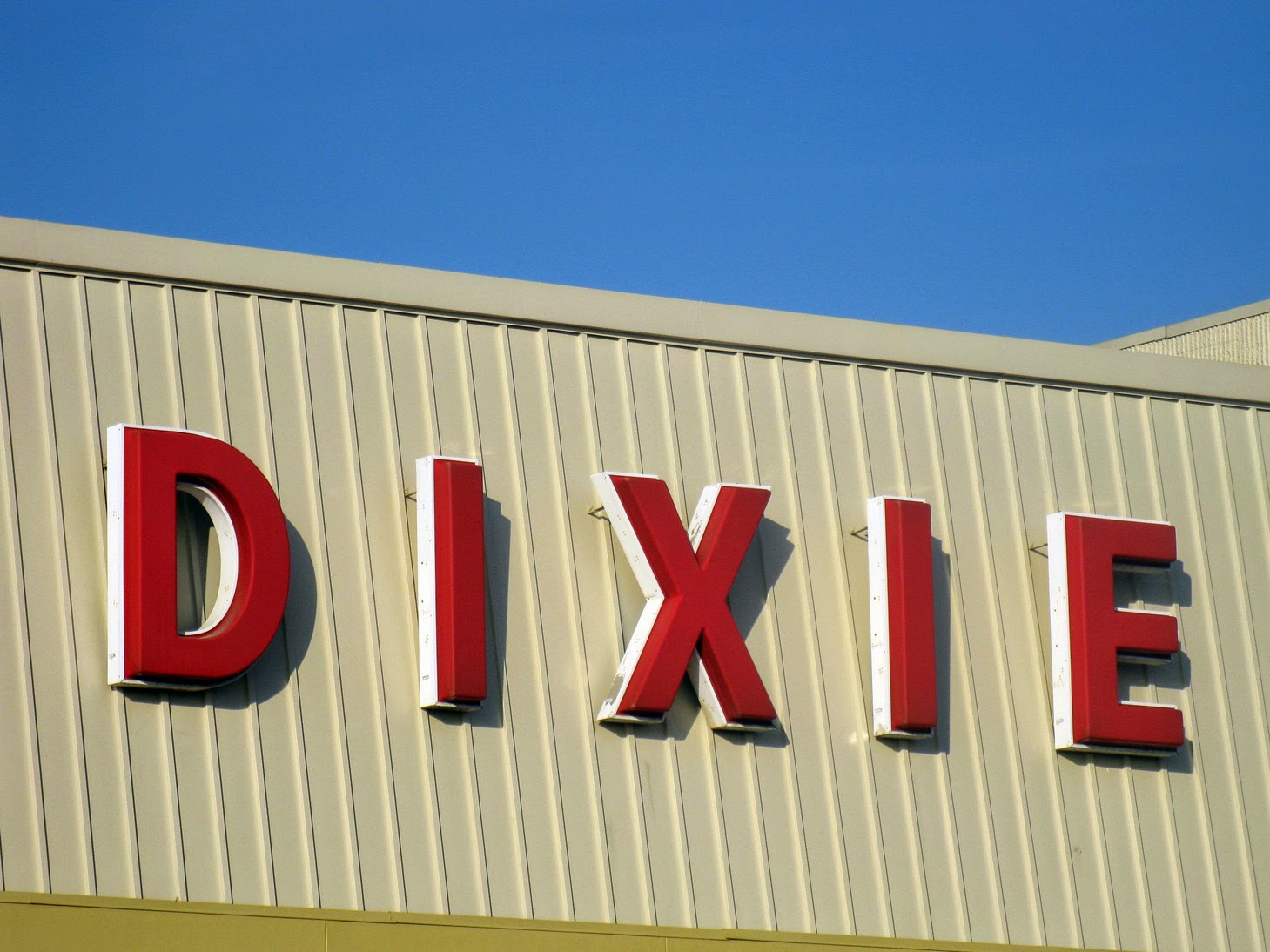 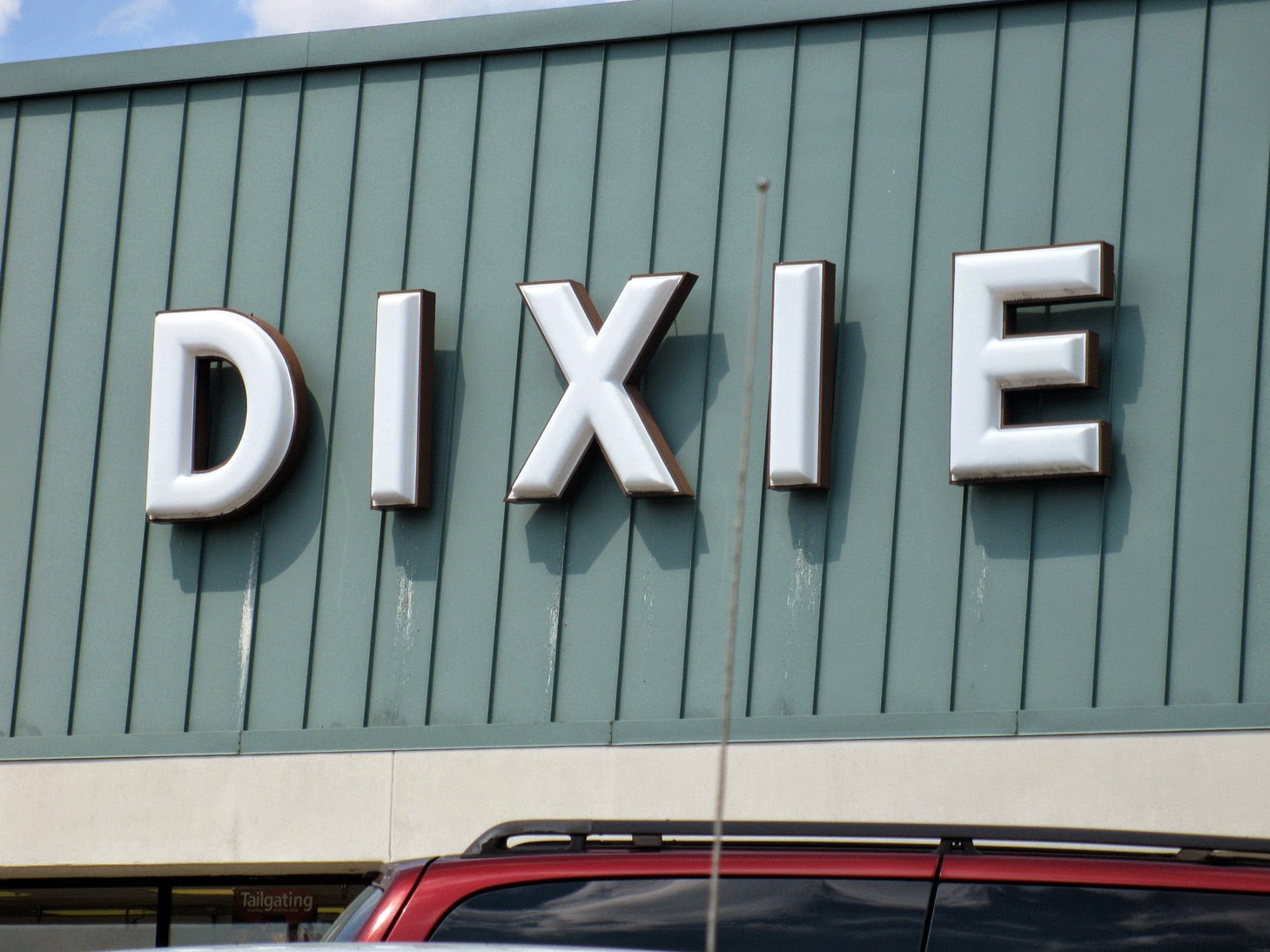 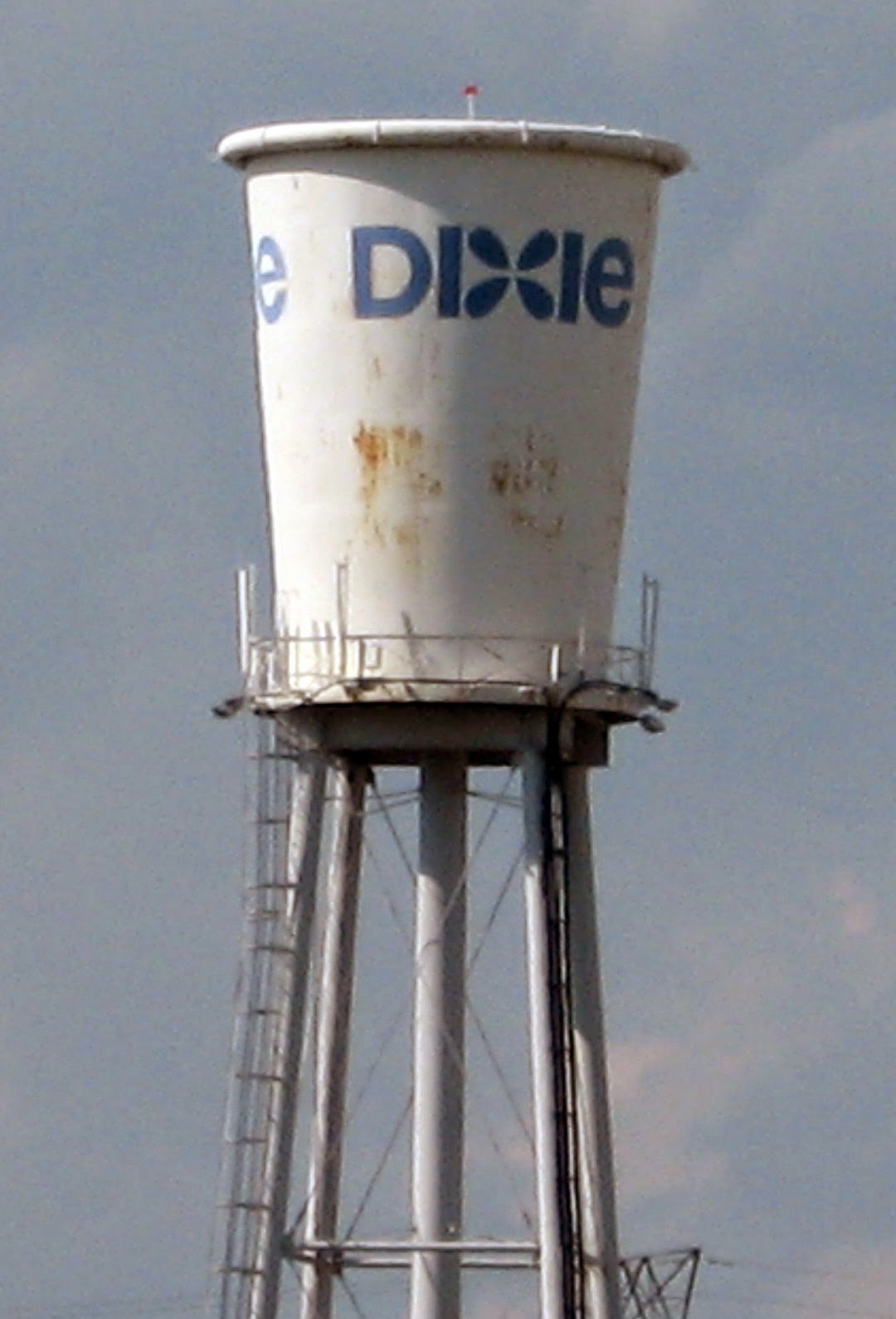 Posted by Gunnar and Sherry at 8:51 AM No comments:

Sven ball in the side pocket: The Viking-themed billiard mural of Riverhead, New York 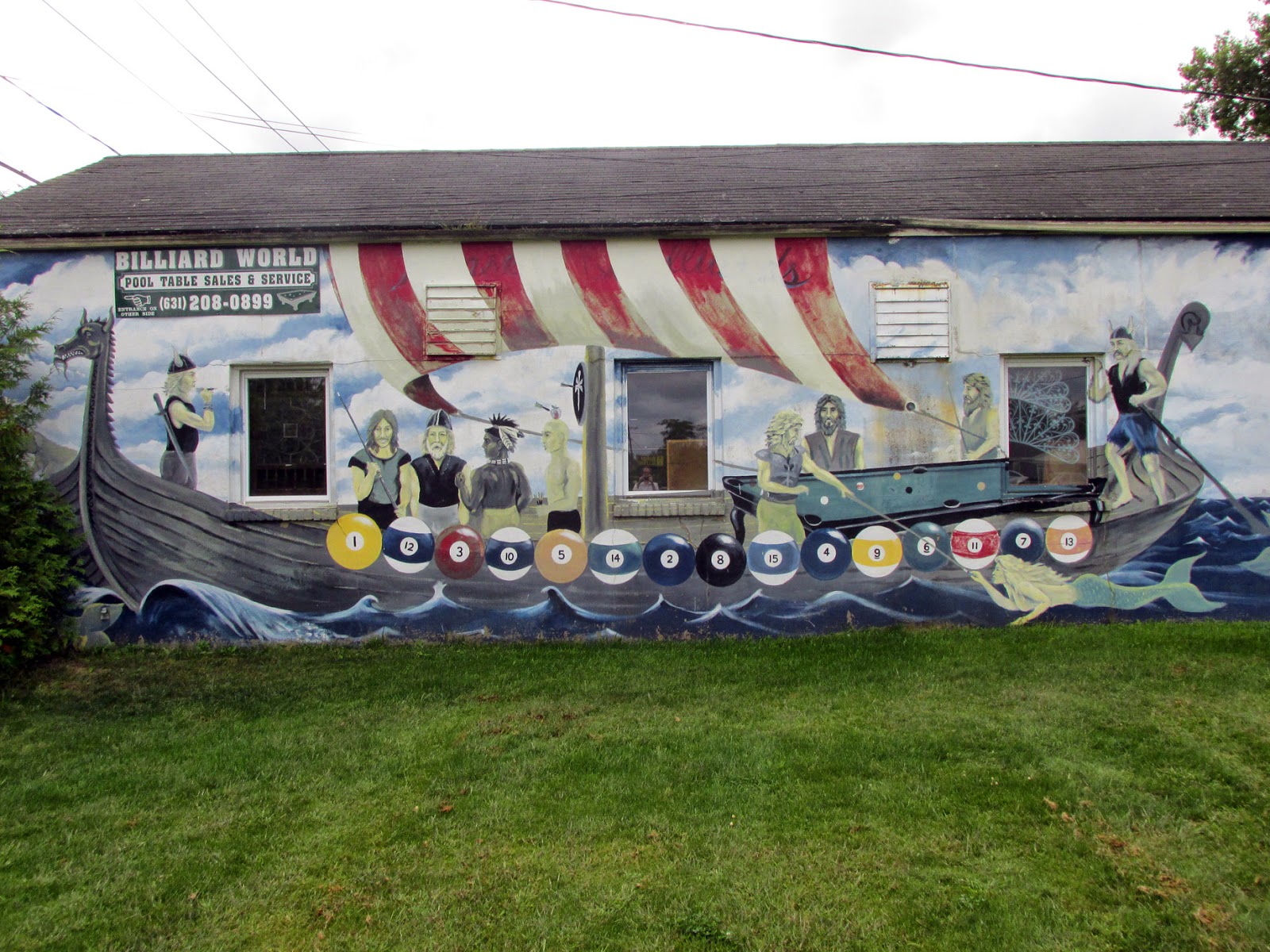 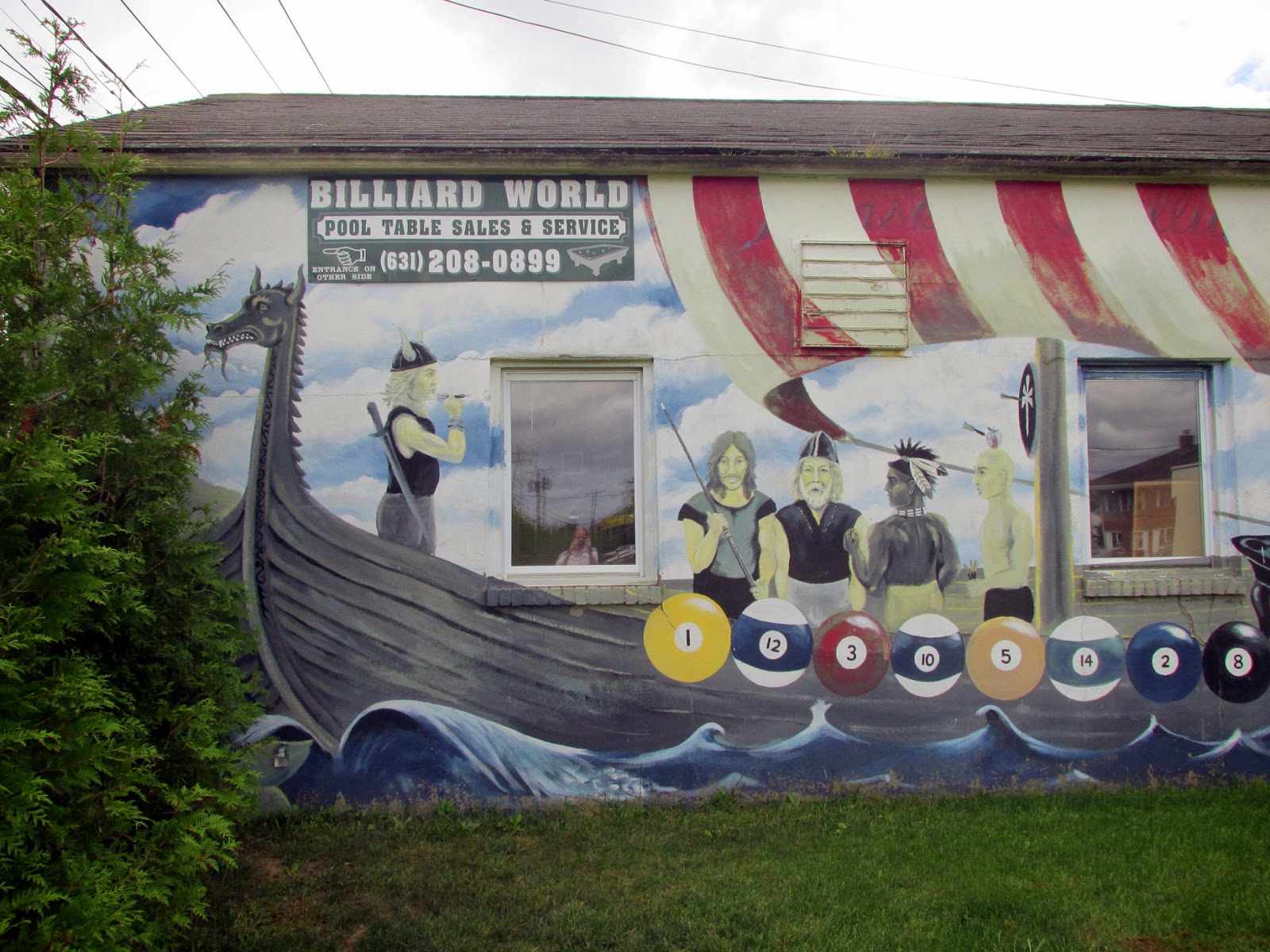 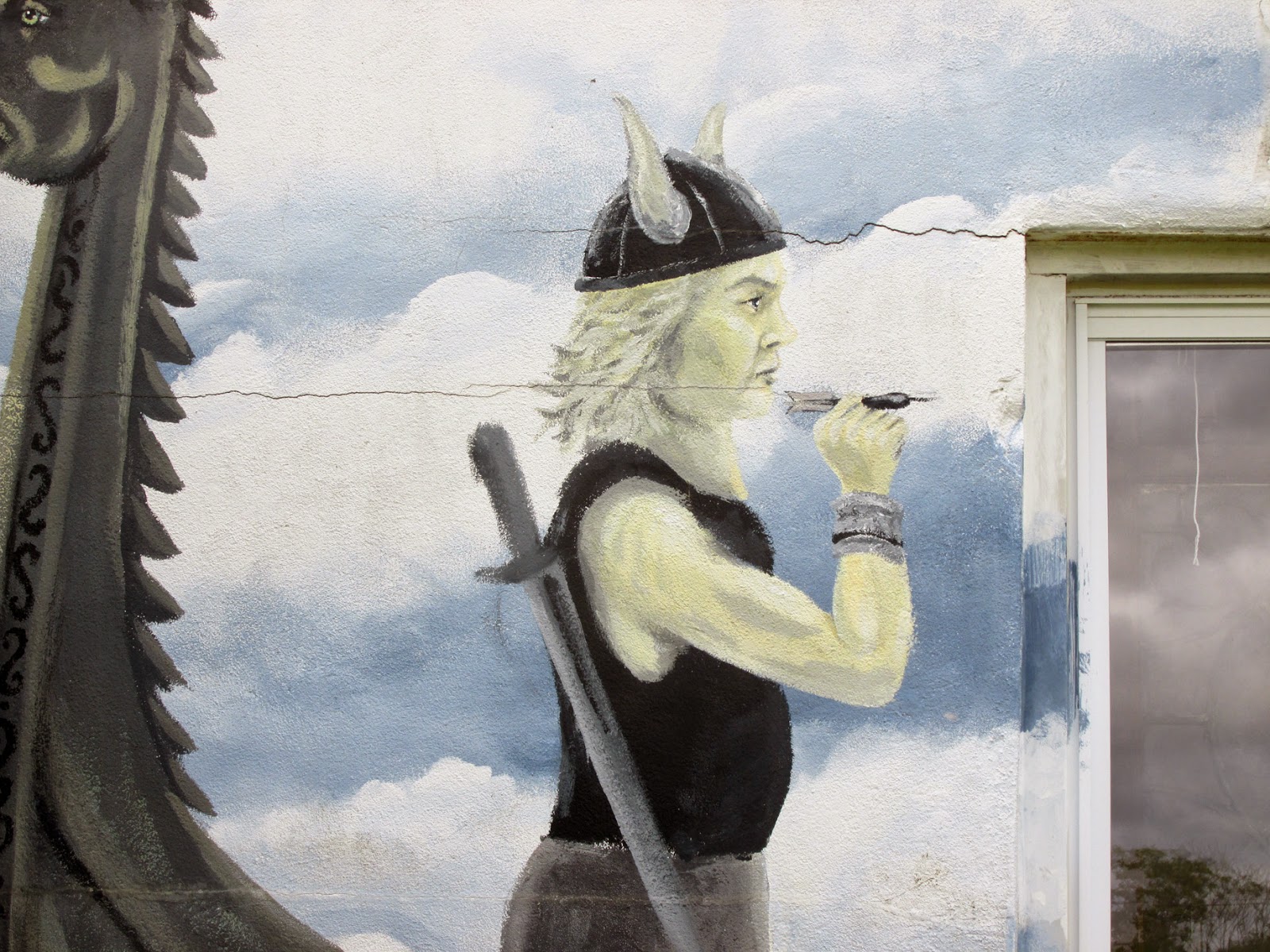 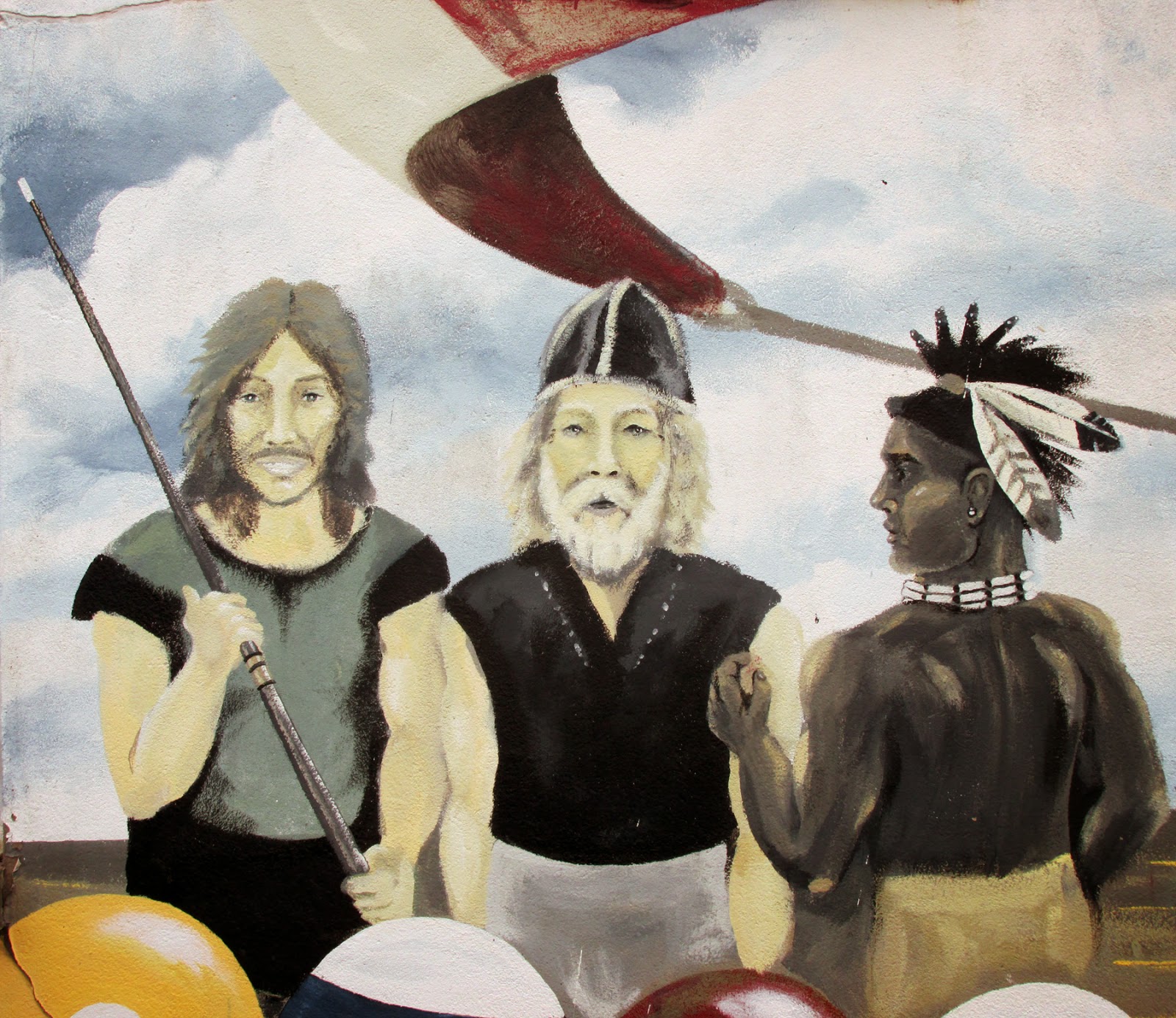 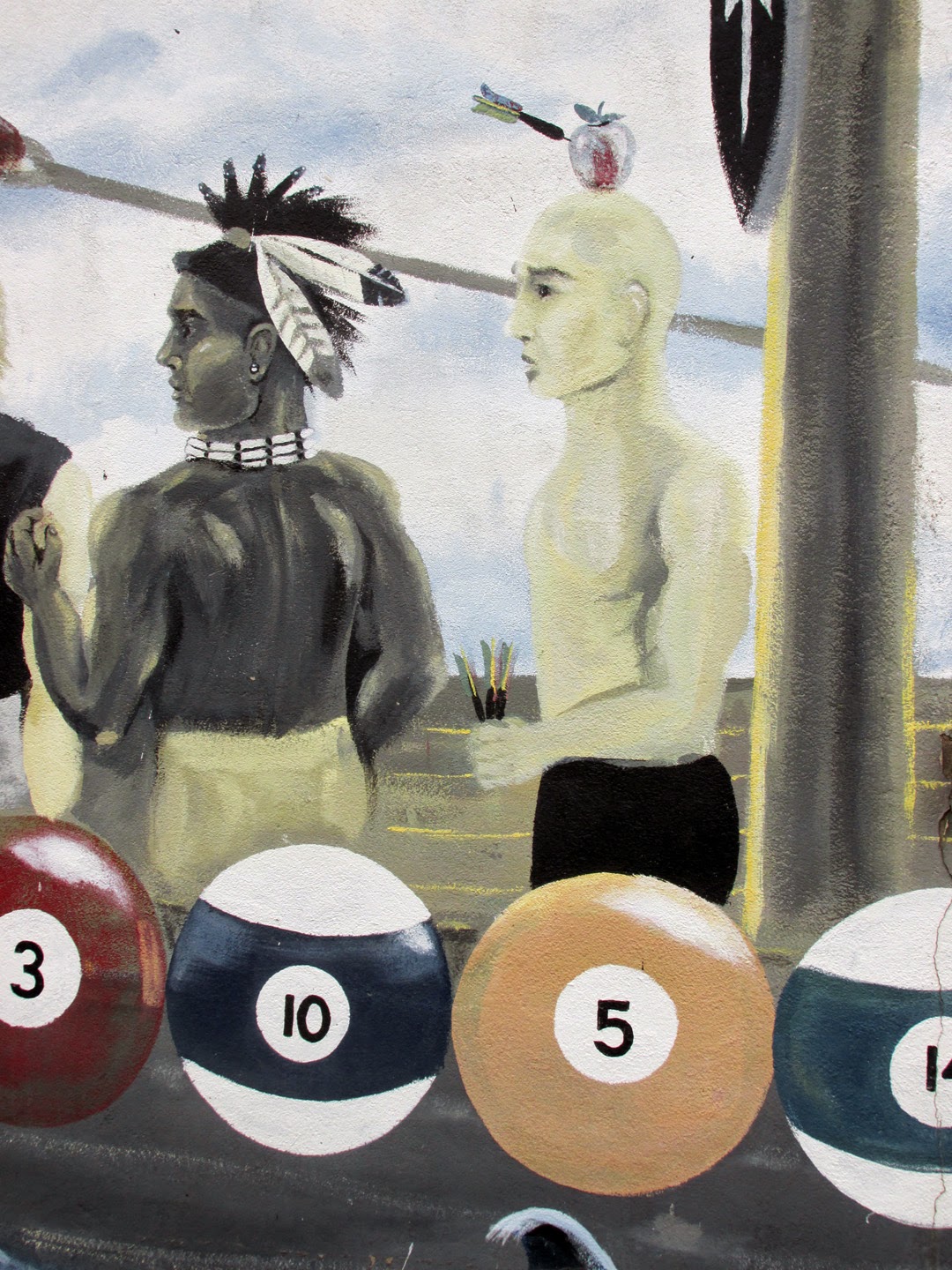 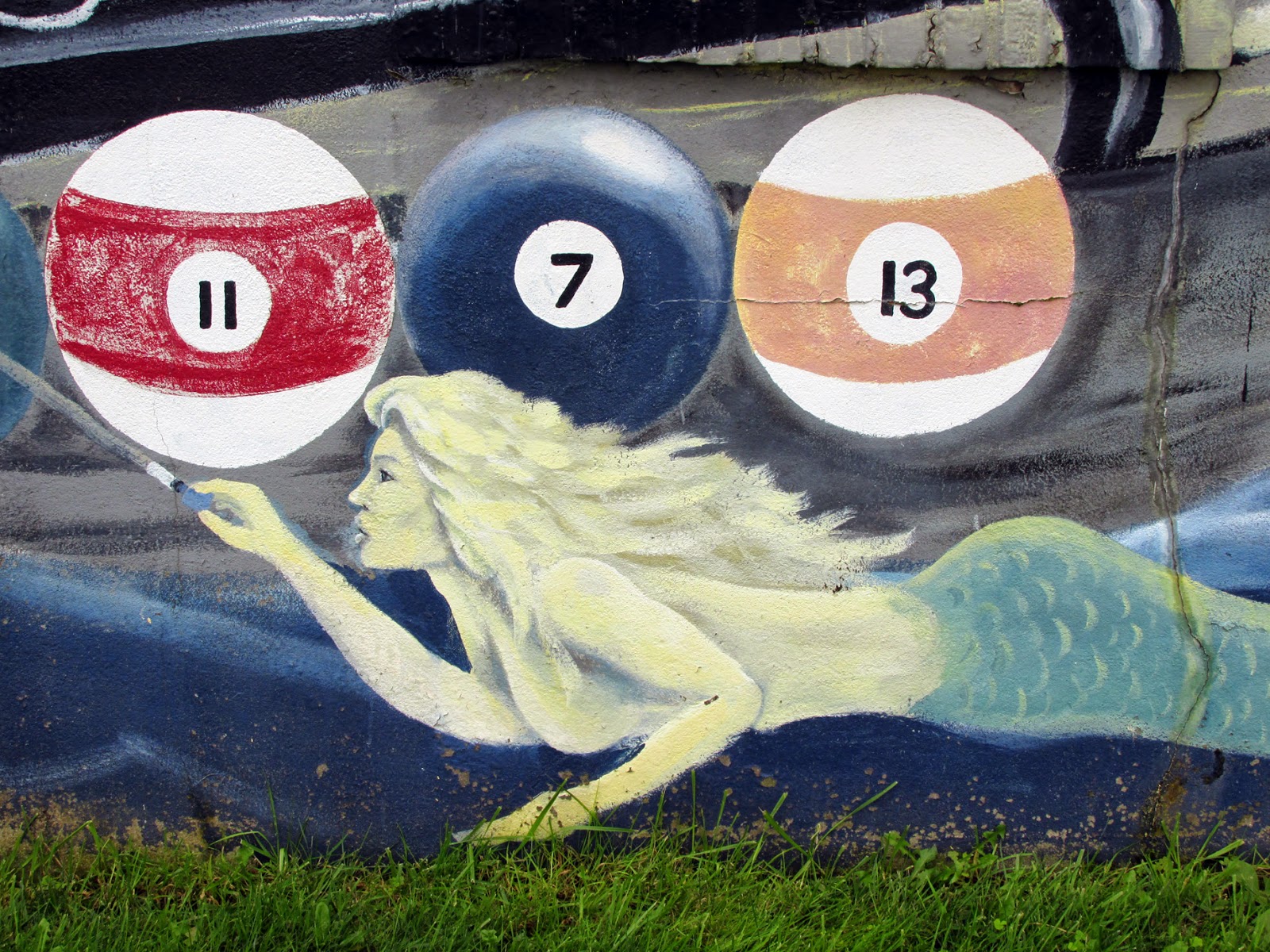 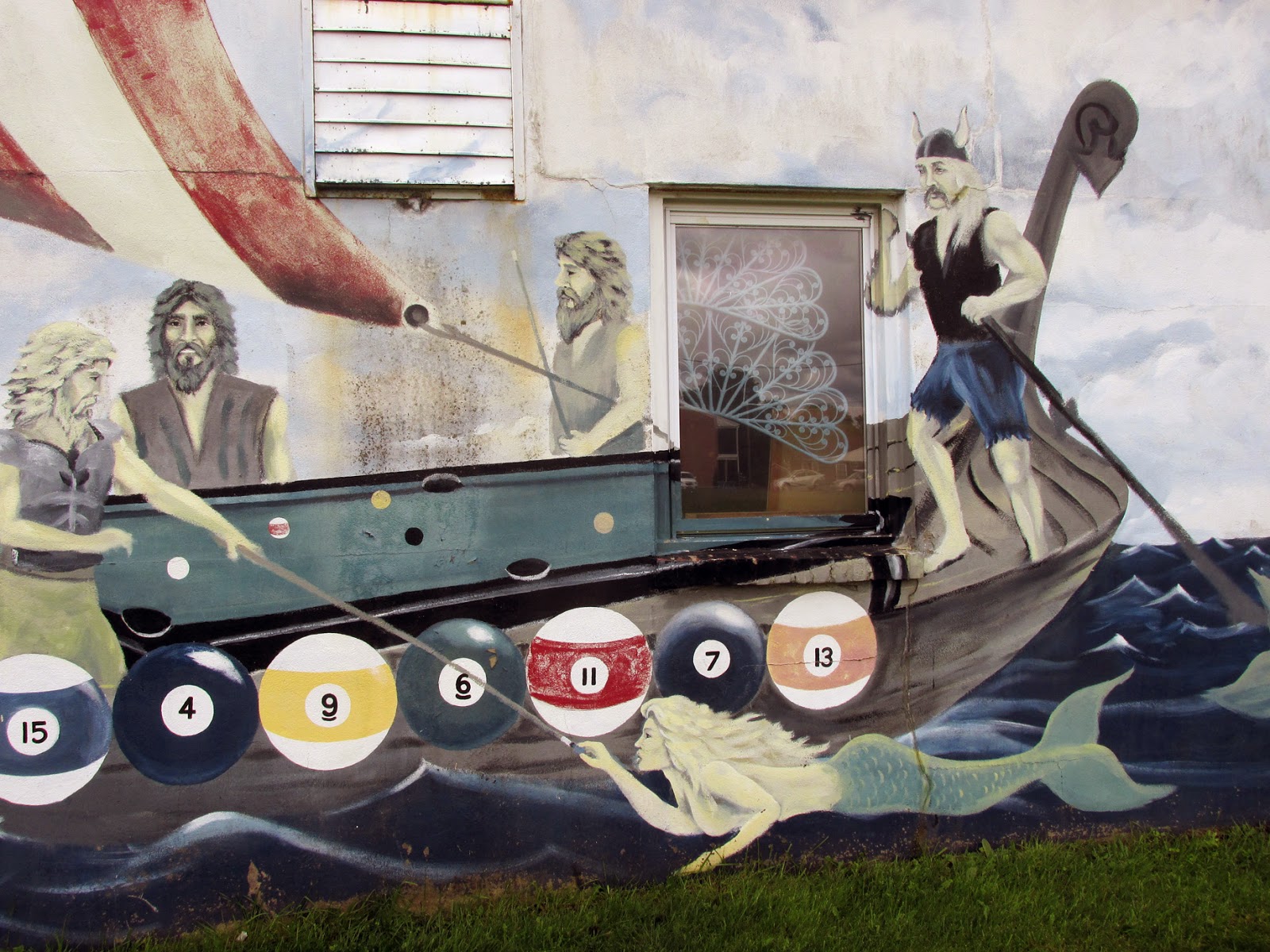 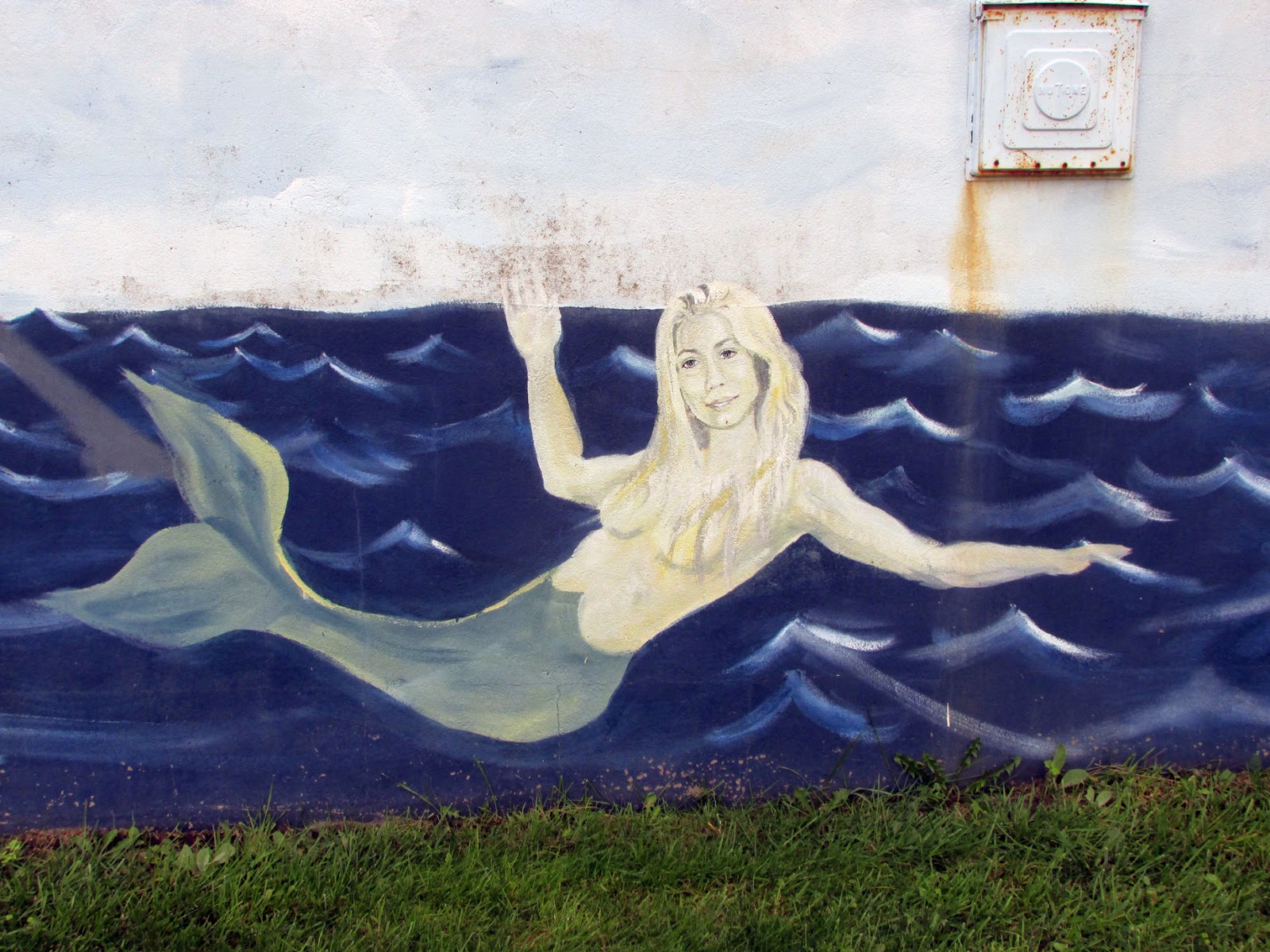 If you look at a map, the eastern end of Long Island, New York looks like a fish tail, with beautiful Orient Point on the northeastern tip and tony Montauk on the southeastern tip. In between the two by land lies the working class town of Riverhead, with its cool, revitalized old downtown and hardscrabble outer regions. We recently delighted upon an eccentric sight next door to our humble motor lodgings: a mural combining the unlikely duo of Vikings and billiards, painted on the back exterior wall of Billiard World, a pool table sales and service company. It is executed with wit and craft, depicting Norsemen with pool cues and darts, and a mermaid or two also thrown in for good measure. Why this unlikely combination? Could the owners be of Scandinavian heritage? Vem vet? (That's "who knows?" to you non-Swedish speakers). We just know that, as with ABBA, Ingmar Bergman movies and Volvos, it's Scandanavian, we like it and we don't know why. 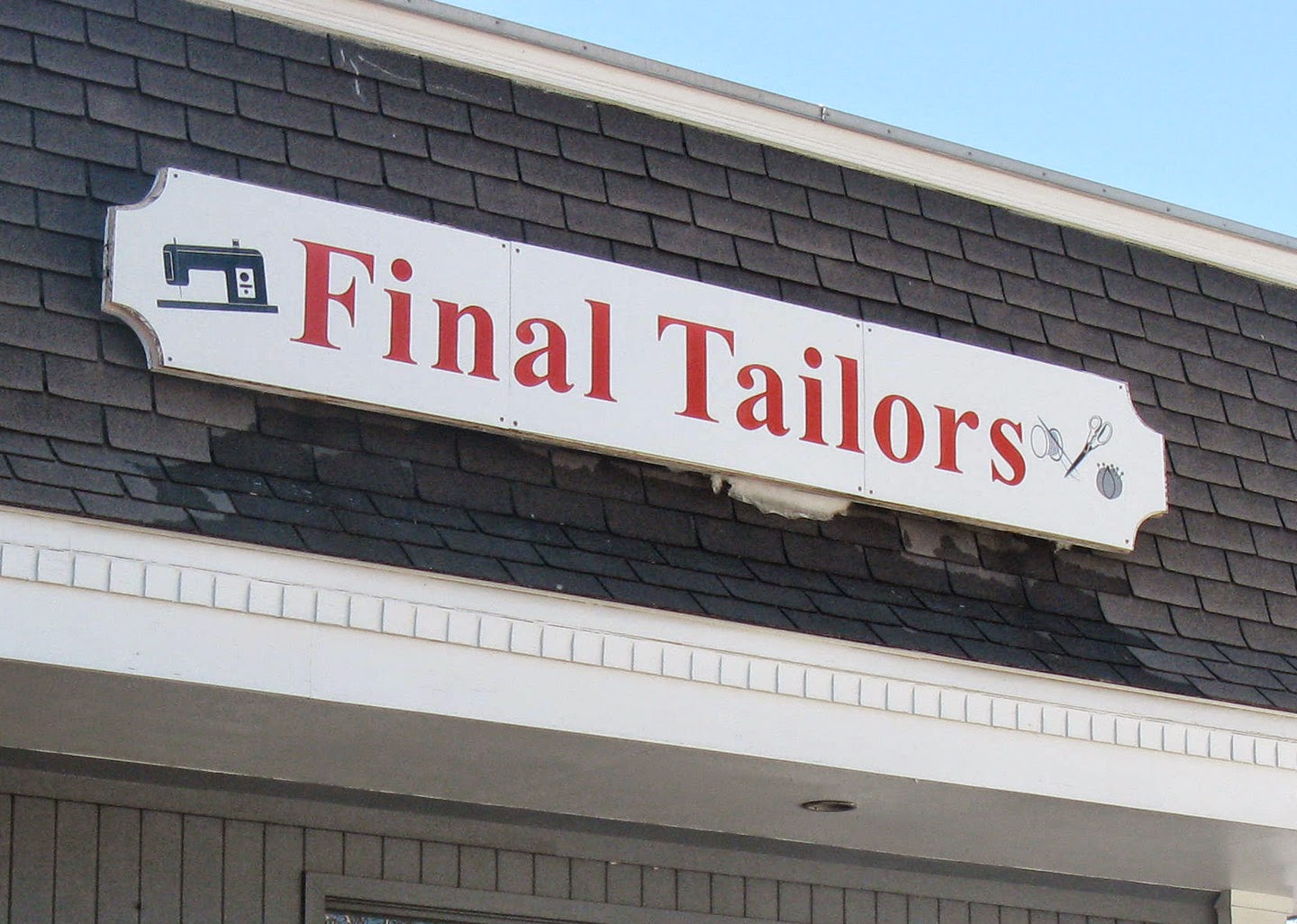 I suppose this is where you go to be fitted for the clothes you'll be buried in.

Posted by Gunnar and Sherry at 2:45 PM No comments: