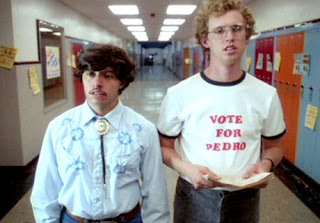 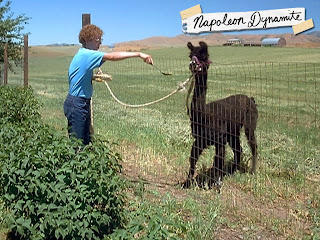 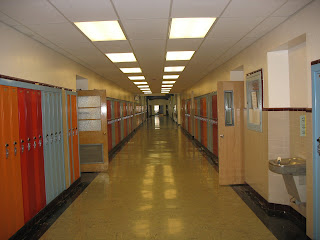 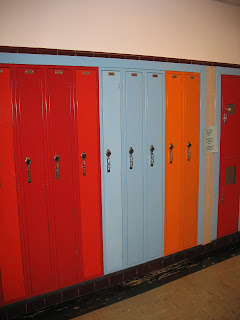 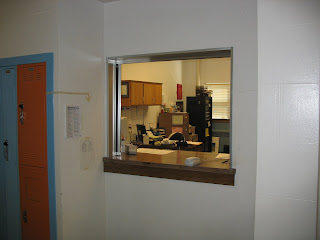 Do you mind if I use your guys's phone? 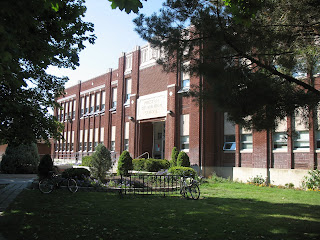 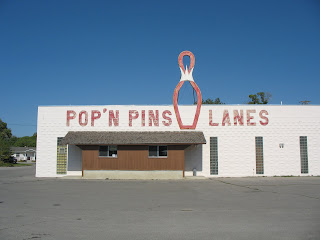 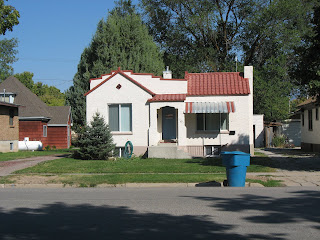 Pedro's house
Preston, Idaho is where the movie "Napoleon Dynamite" was shot. It's a great, funny movie that's quirky and derivative of nothing else. It was made on a shoestring budget by some clever people who are from this quiet, nondescript but pleasant part of southeastern Idaho, an hour or two from Salt Lake City. In 2006, I found an Internet site that gave directions to places around town used in the film but they were a little iffy (One street says East 1600 South, another South 1600 East. Huh?). The nice post office lady gives us vague directions to a house that might be Napoleon's but when we get there there's someone inside and we don't want to park and gawk so we move on. Pop'N Pins bowling alley is easy to find but, wait, was that in the movie or not? Finally we make it to a bonafide locale from the movie, Pedro's house. It's small and unassuming, just like in the movie. Then, the mother lode. Preston High School, where so much of the movie takes place, is around the corner. I shoot some exteriors and a teacher going home for the day (it's 4pm) says why don'tcha just go on in... nobody'll mind. Apparently they were used to lots of sightseers stopping by, even though the movie came out two years prior. Once inside I stop at the office to ask if its okay if I look around a little bit. Sure, they say. You want to see the office phone (a key element in the film)? There it is. They tell me Napoleon's locker is just down the hall, go check it out, and I do. Apparently, an uninvited 46-year-old (at the time) man wandering around a high school isn't discouraged in Preston. Gosh!
Posted by Gunnar and Sherry at 4:48 PM 1 comment:

The lighter side of Little Big Horn and other Montana delights 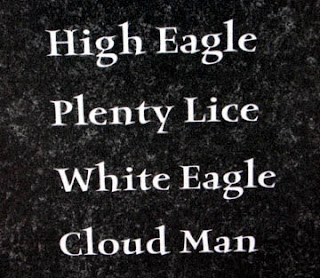 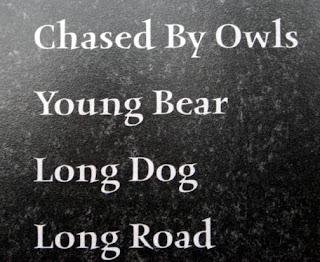 You wouldn't think there'd be anything funny at Little Big Horn, but check out these names on the memorial wall... Plenty Lice? Chased By owls? 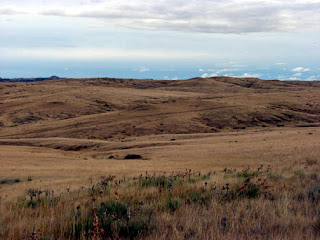 Little Big Horn is in southern Montana and it's location of the famous Indian battle. I always liked hearing about this battle as a kid because the Indians won for a change, and Custer, that pompous twit, got his just desserts. Unfortunately, this would be the last hurrah for the native peoples and the American west. Coming in from the west, the landscape is rolling hills and scraggly prairie. Wide, wide spaces with nothing on them except the occasional abandoned shack and grazing horses and cows. The sky really is big here in this state, just like they say. It's a roadside attraction in and of itself. People really say "howdy" here, too. I love that, when cliches earnestly come true before your eyes. One odd thing about Montana is the number of billboards addressing the meth abuse problem. I didn't even know they had a meth abuse problem, but apparently its so big they have to put up grotesquely graphic billboards (I should have a shot a picture of one, but never did). We passed a "facility" on the highway (a brand new concrete cinder block prison, actually) with a spray painted sign outside calling it the "Meth Motel". Gallows humor for sure. "Club Meth" would have been a little more clever, but I'm not going to quibble with the locals. We get to Little Big Horn and its a somber field with nondescript rolling hills, not the big canyons they had in the movies. Lots of markers where battling union soldiers and Indians met their untimely demise. One thing I wasn't expecting, though, was some unintentional levity in the form of some of the Indian names memorialized in stone: "Guts", "Chased By Owls" and my personal favorite "Plenty Lice". This really isn't the place for humor but I can't help it... funny is funny.
Posted by Gunnar and Sherry at 3:47 PM 2 comments:

This spud's for you: The Idaho Potato Expo of Blackfoot, Idaho

We're honored to have Idaho Potato Expo's giant concrete potato as our masthead. Here's what we had to say about it in an earlier post from our trip there in 2006:

This roadside attraction is everything we'd ever hoped for -- one of those small town, earnest, lovable places that's a tribute to something ordinary that makes America great. A sweet, friendly lady greets us at the front desk/gift shop and is impressed we're all the way from Rhode Island. Inside is the story of Idaho potatoes, told in a low-tech way with lots of folk-arty paintings and exhibits. The gift shop is a vast array of great, goofy souvenirs... who wouldn't want a memento from such a fabulous place? And, true to their slogan ("We give taters to Out-Of-Staters") we receive a box of yummy hash browns to take home with us! You can't beat that.

Posted by Gunnar and Sherry at 2:03 PM No comments:

Posted by Gunnar and Sherry at 10:22 AM No comments: 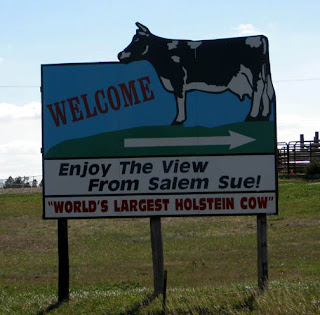 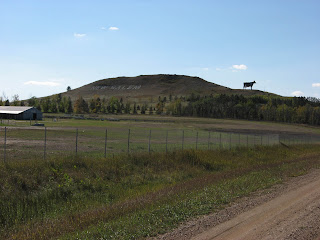 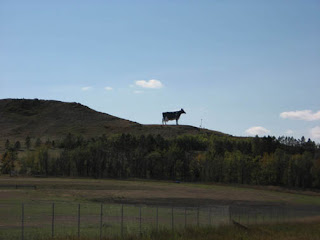 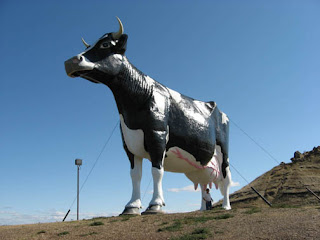 This may be milking it, but Sue is udderly cool. 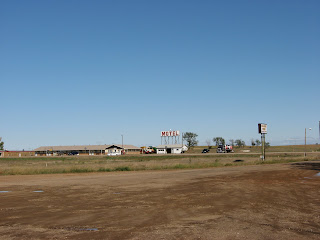 And don't forget to visit the rest of New Salem, too!
This post is a rerun from some time ago but one of our favorites:

North Dakota offers a glittering array of eccentric roadside attractions for those willing to pull off the Interstate and gawk, not the least of which is Salem Sue, who bills herself as the world's biggest Holstein cow. Seems funny they have to add "Holstein" to the title... does another state have the world's biggest Jersey or Hereford? One can only hope. Salem Sue was built as a tribute to the local dairy farmers by the New Salem Lions Club and she stands 38 feet high and 50 feet long. She sits high on a hill and can be seen from Interstate 94. She's made of the finest fiberglass money can buy and is beautifully painted. The drive from the highway to Sue builds up anticipation, as you can see her profile off in the distance, as well as "New Salem" proudly spelled out in rockwork on the hill. Not a heck of a lot else to see here folks, just a really big cow, but how can you not stop? That would be udderly ridiculous.
Posted by Gunnar and Sherry at 6:39 AM 1 comment:

Stuck in traffic: Travel decals picked up along the way 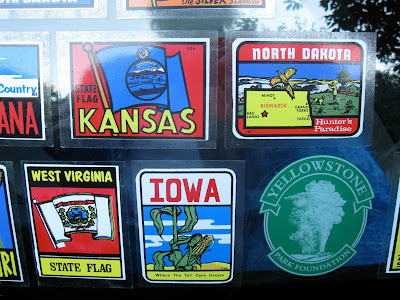 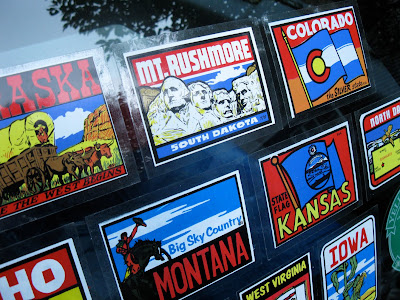 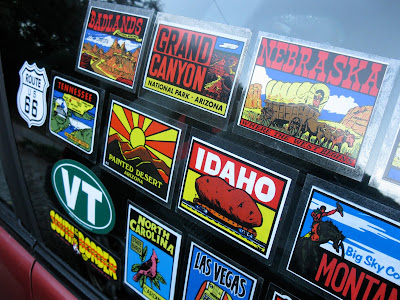 Back in the 60s when I was little and my family took a roadtrip, we commemorated our journey with travel decals proudly displayed on the left rear window of our giant family station wagon. Back then you had to soak the decals off and ever so carefully place them on the inside of the window. My brother and I made this a two-man job; he was the older and more coordinated one so he was the inside glue man, and I was the outside checking for straightness man. We filled that whole window with colorful maps, state birds and gals in bathing suits from the states we visited along the eastern coast. A few years ago I found a shop selling some old-style decals and had to put 'em on the car. These were Baxter-Lane selfsticks, not the Impko soak-ems of my past, but I loved them anyway. I notice they get lots of looks in parking lots and people seem to like them. And it's always easy to find our car...it really "sticks" out, you might say.
Posted by Gunnar and Sherry at 5:38 PM 3 comments: 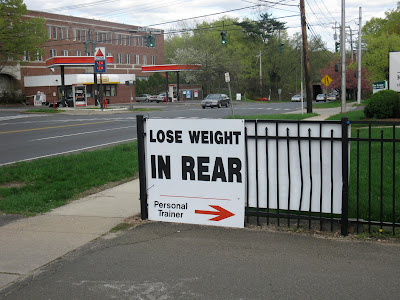 A personal trainer in Hamden, Connecticut put up this whimsical sign. Perhaps in ancient times it would have read "Friends, Romans, Countrymen – lend me your rears".
Posted by Gunnar and Sherry at 3:44 PM 2 comments: