A Muffler Man after our own heartburn 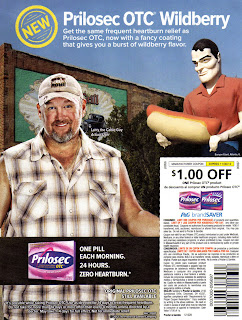 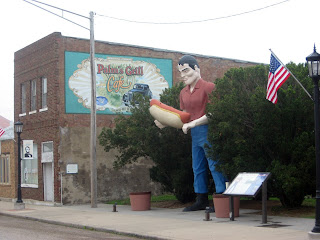 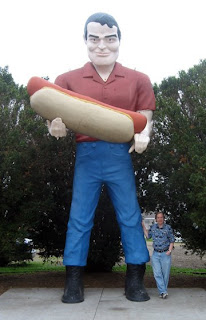 The folks in the advertising department at Proctor & Gamble had the good taste to feature an Eccentric Roadside favorite, the Muffler Man, in their print ad for Prilosec heartburn reliever inserted in our local newspaper. We're not quite sure what he's doing there, behind Prilosec pitchman (and "actual user") Larry the Cable Guy, especially since the ad seems to be promoting "a fancy coating that gives you a burst of wildberry flavor". But we're not here to quibble; we're thrilled to see this fine specimen of Muffler Manhood appearing in any media, advertising or otherwise. And we actually had the good fortune to see this fellow in the flesh (or fiberglass, if you're going to nitpick). He's located in the wonderful little town of Atlanta, Illinois on glorious Route 66. He was put there after his owners, who once used him to promote a hot dog stand, donated him to the town to remain a Route 66 icon.

We've never felt the need to take an acid indigestion remedy, but if the occasion ever "comes up" we'll definitely keep Prilosec in mind. We hope this statement reflux our enthusiasm sufficiently.
Posted by Gunnar and Sherry at 1:54 PM 3 comments: 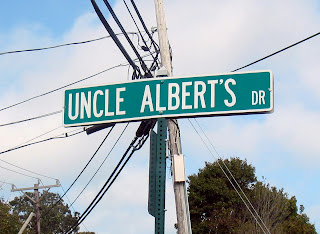 We're so sorry, Uncle Albert's Drive, but we haven't done a bloody thing all day...

Posted by Gunnar and Sherry at 3:56 PM 3 comments: 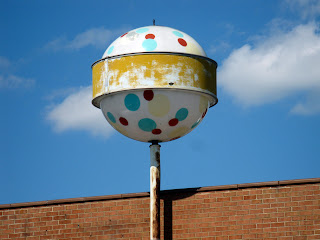 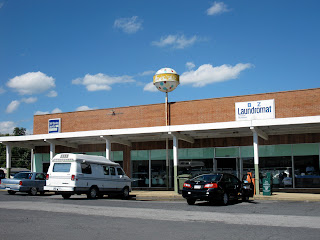 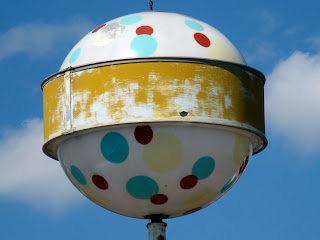 So the time I used up by having to hunt down a Burger King for the call of caffeinated nature was actually a plus because of the Norge ball photo op. You might say it was a wash.
Posted by Gunnar and Sherry at 5:51 PM 6 comments: 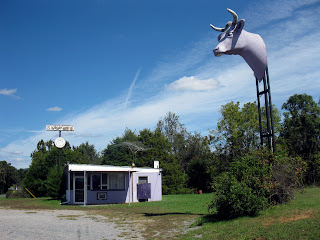 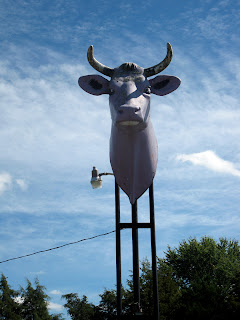 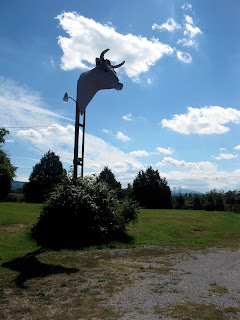 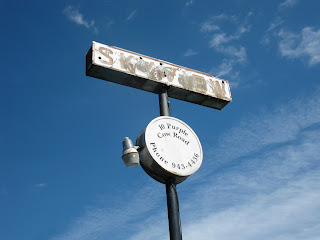 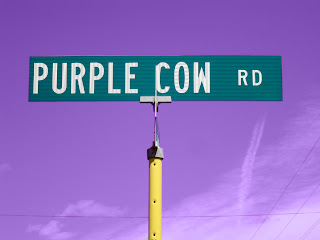 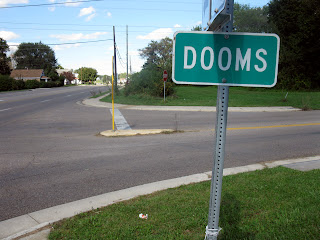 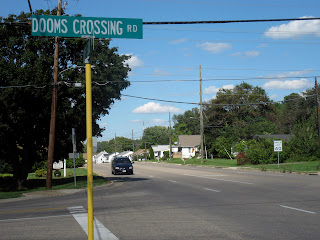 If you're driving on Route 340 not far from Waynesboro, Virginia, you'll hit a pleasant little town with the dark and gloomy name of Dooms. That alone would be reason enough for an eccentric roadside attraction fan to get off Interstate 81 in western Virginia, but wait, there's so much more! On the corner of Route 340 and Purple Cow Road is, well, a purple cow. Actually, it's the fiberglass head of a purple cow attached to a pole that the locals have been using as a landmark for nearly fifty years. In 1964, the Simerson family ran a restaurant on the property and purchased an entire cow sculpture from a nearby dairy, colored its head purple and put it on a 20-foot pole to attract attention. A variety of businesses have been on the property since then and today it appears abandoned, but the cow head remains, and there are several homes on Purple Cow Road. Now that's an address I'd love to have. And what about the name Dooms? Turns out the town was started by a family with that name and there are descendants that still live there today. In fact, there might be one living on Purple Cow Road. So here's looking at you, cud. Power to the purple, right on.

Posted by Gunnar and Sherry at 2:09 PM 8 comments: 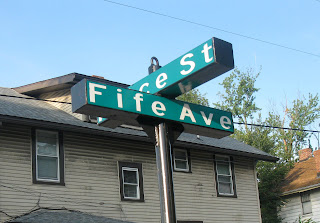 Fife Avenue wouldn't be all that eccentric a name except for the fact that it's located in Morgantown, West Virgina, which is Don Knotts' hometown (see previous post), and he played a character named Barney Fife and I believe it's all just an incredible coincidence. And as Barney would say, there are two kinds of cops on Fife Avenue: the quick and the dead.

Posted by Gunnar and Sherry at 11:08 AM No comments:

Ask Knotts what your country can do for you: Scenes from Don Knotts' hometown 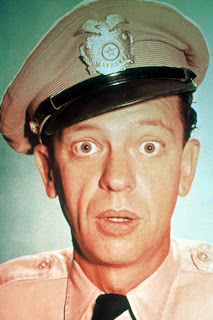 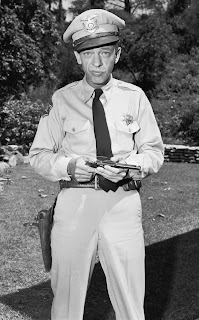 "You could say there are three reasons why there's so little crime in Mayberry. There's Andy, there's me, and baby makes three." 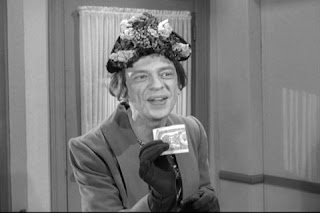 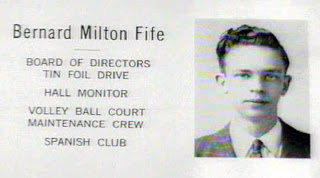 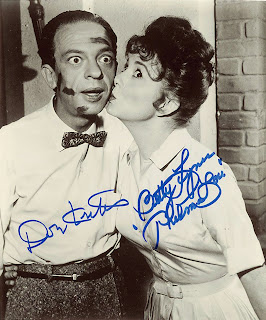 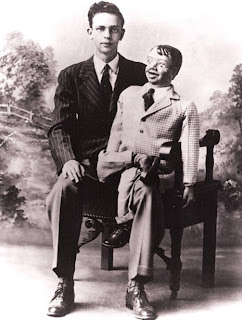 Don started his show biz career as a ventriloquist... 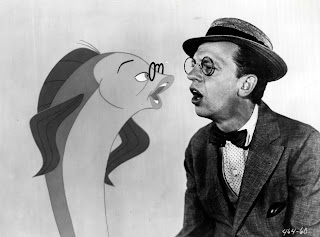 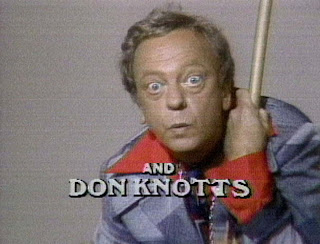 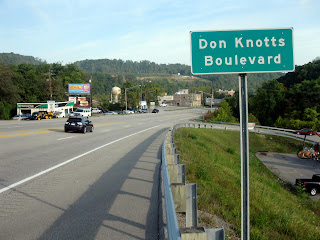 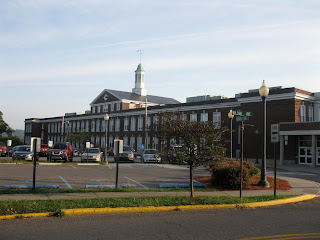 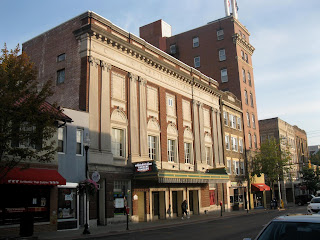 Morgantown also honored Don with a star on the sidewalk in front of the Metropolitan Theatre. 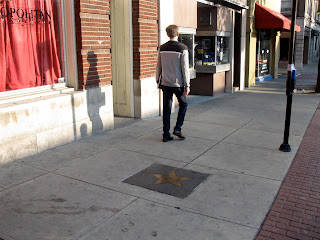 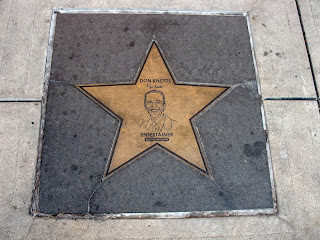 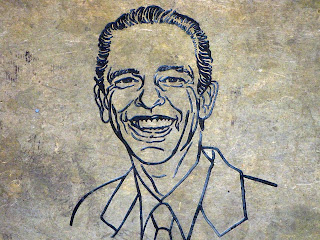 As a comic actor, everything about Don Knotts was funny. Funny bulging eyes, funny gaunt face, funny fish lips, funny high-pitched voice, funny trembling hands, funny sunken chest. It was Knotts' great fortune to luck into the role he was meant to play, inept small-town deputy Barney Fife opposite his real-life friend Andy Griffith on "The Andy Griffith Show." Taking advantage of Knotts' characteristics, the show's writers (including Griffith and Knotts) molded Barney into someone with too much pride, too little smarts, too much emotion, too much bravado and yet, and this was Knotts' genius as an actor, someone you didn't want to see get hurt. Even though Barney is a fool and drives Andy crazy, Andy goes to great extremes to make sure Barney's pride doesn't get shattered because, deep down, Barney is a good guy and a good friend.

Knotts grew up in Morgantown, West Virginia and went to Morgantown High School. He had dreams of a show business career after high school and went to New York City with a ventriloquism act that wasn't successful, so he returned to Morgantown and went to West Virginia University. After college and a stint in the Army, Don's career began to take off and his appearance with Griffith in the movie "No Time For Sergeants" led to his signature part of Barney years later. After "The Andy Griffith Show," Don starred in movies and as one more memorable TV character, Mr. Furley, the leisure suit and toupee-wearing landlord on "Three's Company." He also appeared several times on his old friend Andy's "Matlock" series.

They're proud of Don in Morgantown and have honored him with a few tributes. Busy route 119 in and out of town was renamed Don Knotts Boulevard, and the sidewalk in front of the Metropolitan Theatre, where Don has performed, has a star, Hollywood Walk Of Fame style, with his name and likeness on it. In 2007, it was announced the Knotts family had given permission for a statue of Don to be erected in Morgantown and put up in a new garden park to be designed in a prominent location in town. As recently as this year, fundraising efforts for this project were still in the works. We sure hope this comes to light because, according to his daughter, Don liked his hometown very much and he went on to have such a great career.

And to those who say I'm making too big a deal of Don Knotts, I'd like to say "Nip it! Nip it in the bud!"
Posted by Gunnar and Sherry at 7:36 AM 2 comments: