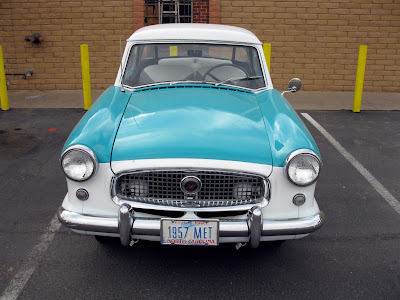 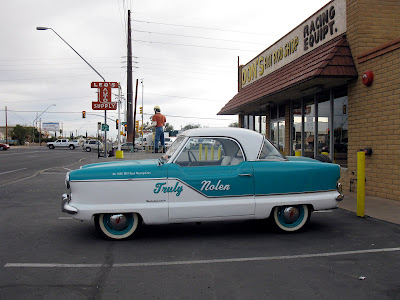 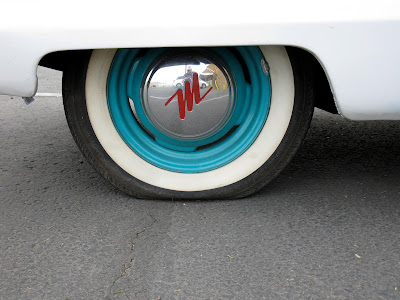 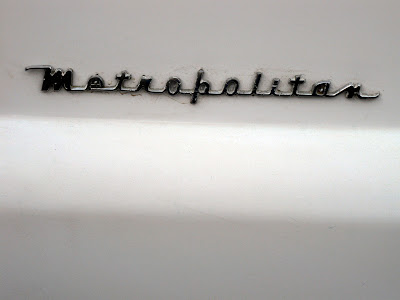 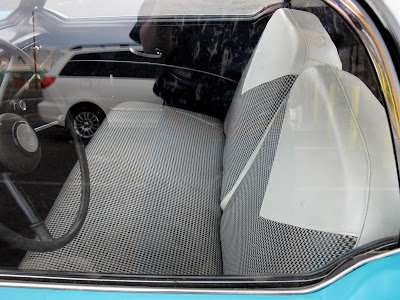 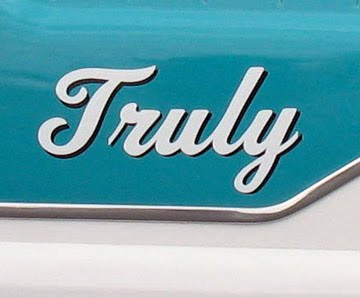 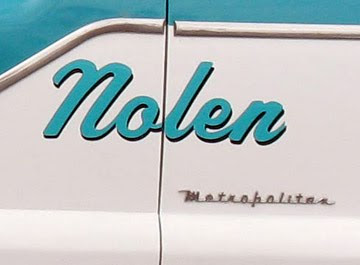 I've done a few posts about Tucson, Arizona's awesomely retro North Stone Avenue, and one more treasure to be encountered on this boulevard of dreams is the Truly Nolen Nash Metropolitan parked near the corner of Glenn Street in front of Don's Hot Rod Shop. Having never been to this region before, the name Truly Nolen was a mystery to us as we kept encountering it painted on the sides of classic old cars throughout the area. Was it a car dealership? A politician? And what was so true about this Nolen, anyway? Well, it turns out Truly Nolen is a pest control company, and a pretty big one at that. They use personalized classic cars as a promotional device. They also have a fleet of yellow VW Beetles bedecked with large mouse ears to simulate vermin.
You don't realize how small a Nash Metropolitan is until you're standing next to one. It's not much bigger than today's new-fangled Smart Cars but it's much more stylish. You half-expect to see a cartoon dog driving this car down the street, or a dozen circus clowns pile out of it. I'd love to have one of these in my driveway but I'm not sure I'd want to commute in one during rush hour on I-95.
And it turns out Truly Nolen is named after its founder, Truly Wheatfiled Nolen, who started the company in 1938. The company has 83 locations and 100 franchises in 41 foreign countries (thank you, wikipedia) and is still family run today.
And as an incredible retro-tastic bonus, there's a muffler man and a cool old neon sign all within eyeshot of the Nash. Truly incredible.
Posted by Gunnar and Sherry at 7:45 PM


The Nash is just gorgeous. We've got a Nolan mouse-bug locally. They're pretty cute :)

I love these stories that bring me a local angle... this one's great! Makes me want to do a road trip!

The Nash Rambler (one of my faves) moves around Tucson too. Actually we rotate all the Truly Nolen antiques!