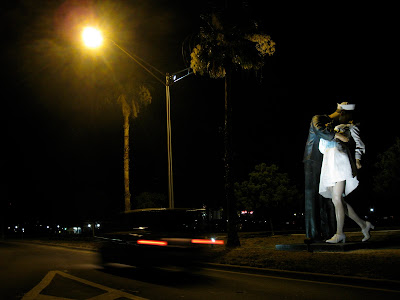 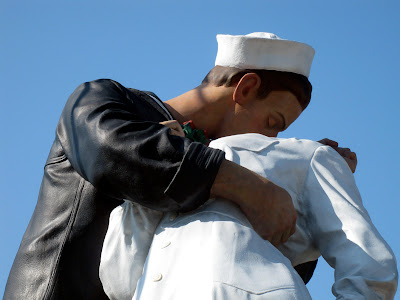 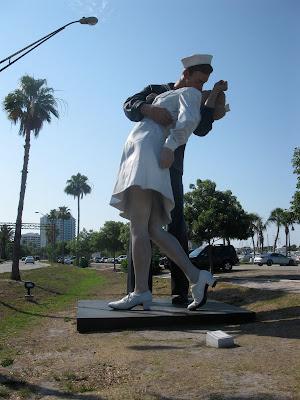 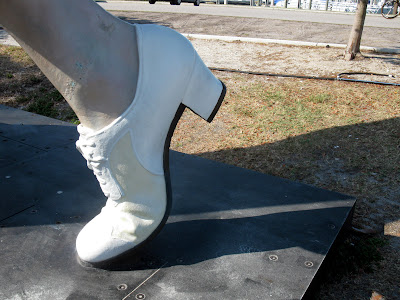 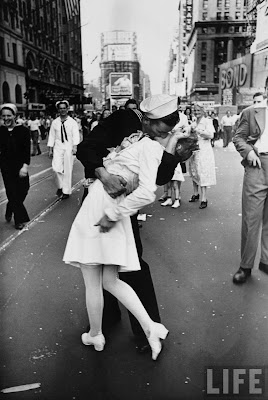 Edith Shain, who claimed she was the nurse getting swept off her feet in Times Square by the kiss of an anonymous sailor in an iconic Life Magazine photo shot on Victory Over Japan Day in 1945 died today. She was 91. Her passing is rather timely for us at Eccentric Roadside because just last week I took some pictures of a statue depicting the famous Alfred Eisenstadt photo on Route 41 in Sarasota, Florida. A great big one. Twenty-six feet tall to be exact. Entitled "Unconditional Surrender," it was created by noted sculptor Seward Johnson, the same artist responsible for the truly awesome 25-foot "American Gothic" replica we saw in Chicago last year, and it makes quite a statement along the busy palm treed boulevard, surrounded by high-rise condos and a luxurious marina. Sarasota was the statue's original home in 2005. It was then moved 3000 miles away to San Diego for a spell, and then returned in better than ever condition back to Sarasota in 2008. A June 18 post to roadsideamerica.com reports the smoochers were being craned onto a flatbed truck bound for New Jersey for some repairs before a triumphant Sarasota return engagement later on this July. Eisenstadt never got the names of the original celebrants and more than one nurse and sailor have claimed to be the make-out artists in the photo, but we believe you Edith. Don't sit under the apple tree with anyone else but us.
Posted by Gunnar and Sherry at 5:59 PM

Wow! The sculptor really made an iconic photo come to life!! Love it :)

Wow, that is an absolute amazing sculpture! I shouldn't be surprised because the "American Gothic" in Chicago was equally fantastic. I hope I will have an opporunity to see this one as well.

Is it going to be remaining in Sarasota permanently or, like the American Gothic sculpture, will it also continue to tour the country?

Hi Kris,
As far as I know, it's going to be in Sarasota permanently after it returns later in July from having some repairs, although some of the local residents aren't too fond of it. It's pretty awesome though!

Once again - A local connection. Let's not forget the dude from Middletown RI who claims to be "The Guy". Maybe he is, maybe he isn't..... but, it is end of World War II, which involved, well - The Whole World. Awful lot of fellas running around in uniform that day. I think the odds of him being from tiny RI are quite large. The only BIGGER long shot would to NOT have some joker from RI say " Yo, That's Me!"

Bill: I saw where the guy from R.I. was in the Bristol parade last year with some other gal who says SHE's the skirt in the photo. That Eisenstadt was a real hack for not getting their names. He'll never make it this biz!

I hear that... I would hate to trust him with "Home Of The Week", or something REALLY important - say - somethig from "Thrive".

Aaaahhh. Unconditional Surrender was fine until there might be a chance of it being a permanant fixture in SRQ. I myself have come to love it. It makes people happy. The "arts" crowd has a different opinion of it.

Thanks for the update, Carolann. Is it really banned from Sarasota?, and if so, I wonder where it is now. I'm sure they could find a home for it here in Rhode Island!

The happy couple are safe and sound in SRQ! The arts crowd put up a fight. They want it off the bayfront. Kitsch they call it!