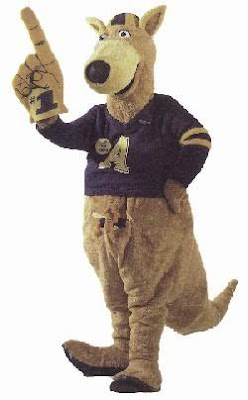 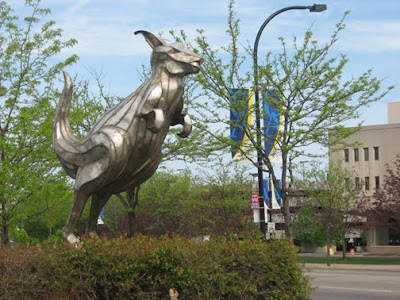 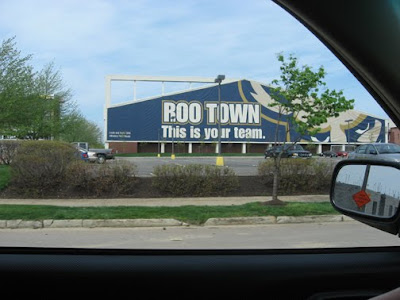 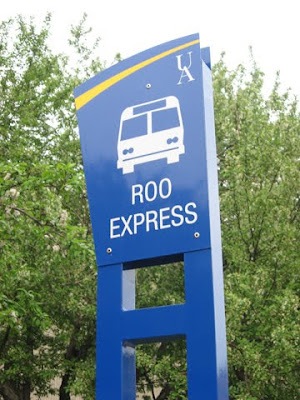 Akron, Ohio is a nothern industrial city known for, among other things, being the hometown of Goodyear Rubber. It's also on the way to lots of places if you're driving from the east to the west. We have a good friend who teaches at the University of Akron who we always stop in and see on our road trips. I didn't realize the university had an unusual mascot, though, until our last trip. Wildcat? No. Cougar? Nada. Kangaroo? Ding, ding, ding! Zippy the Kangaroo, to be precise, who has been their beloved mascot since 1953. Why Akron picked an Australian marsupial is a bit of a mystery, but the incongruity makes it tops in my book. I suppose kangaroos are fast, agile and determined, all good traits in a college sports mascot, but it's still a bit kooky. Zippy is also a female, one of only a few female college sports mascots in the country and certainly the only one with a pouch. Capital One (the credit card company) sponsors a college mascot popularity contest (and you thought those high credit card interest rates were only used to line greedy corporate CEOs' pockets...well, they are, but they also put UAkron on the map). Zippy has been chosen number one on more than one occasion, giving Rootown something to cheer about. Take that, Kent State!
Posted by Gunnar and Sherry at 11:36 AM

Rhody The Ram can kick her little furry butt.

Haha! I always thought URI should have had a quahog as a mascot. The fighting Rhody Clams!

And lets not forget the RISD Hockey team, nicknamed the "Nads" - where the fans are encouraged to shout "“GO NADS!”

My son goes to the U of Minnesota, whose mascot is Goldy (the Golden Gopher) because, I assume, of the maze of tunnels that connect the campus buildings. (Convenient when the wind chill is -50.)

One day Sam was walking through one of them, and looked up to see Goldy, all alone, walking towards him at the far end of the tunnel.

They passed and hellos were exchanged. Just like "hey".

Bill: I don't which is more peculiar: the name of the RISD hockey team, or that fact that RISD has a hockey at all.

Jeffery: That's a funny story. I ran across Goldy's name when I was looking up info about Zippy... I love a college with an eccentric mascot!