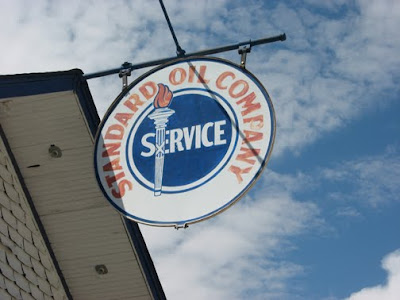 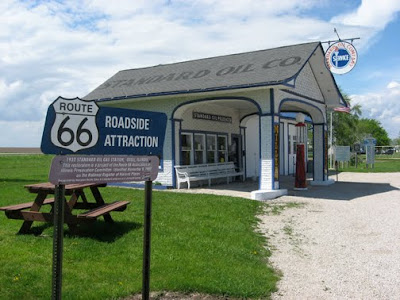 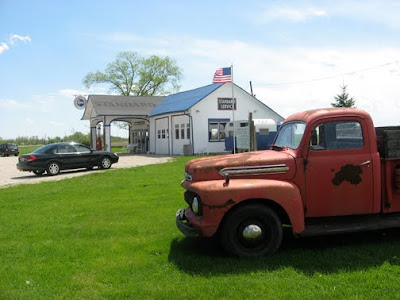 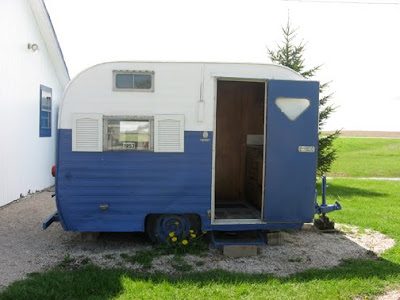 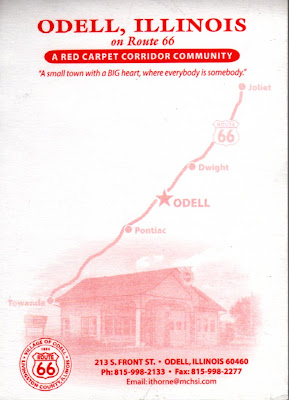 A spectacular example of well-preserved Route 66 petrolium-abilia resides in the pleasant little town of Odell, Illinois. A 1932 Standard gas station greets you like a cheery "Howdy" while you're tooling down the mother road. As was typical with other towns along 66, Odell was a bustling community with 10 gas stations up until the interstate was put in, robbing Odell of its traffic and causing most local businesses to disappear. This particular station kept selling gas, though, up until 1967. The station was a body shop up until 1999 and then the village of Odell purchased it for historic preservation. And what a beautiful preservation it is. Crisp blue and white paint, antique pumps, and cool old lettering on the roof shingles. It now serves as a tourism station and is on the National Register of Historic Places. Inside, friendly folks will give you pens and pads with the nicest town slogan I've ever heard: "A small town with a big heart, where everybody is somebody." We could use more places where everybody is somebody, couldn't we?
Posted by Gunnar and Sherry at 7:15 AM

Didn't know you got as far north as IL. We might bump into each other ;-)

Jeff,
Yes, we've been all over! We had a terrific time driving around Illinois last spring. Probably passed you along the way!