Meanwhile, back at the Cadillac Ranch 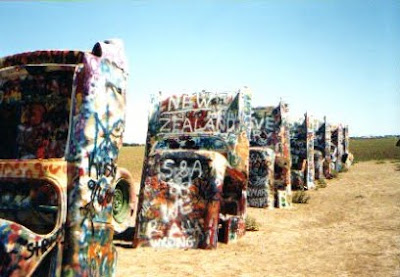 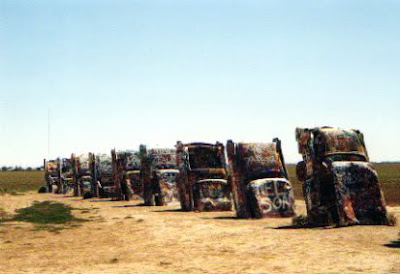 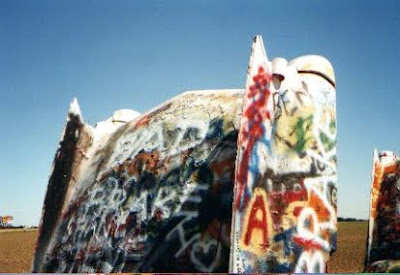 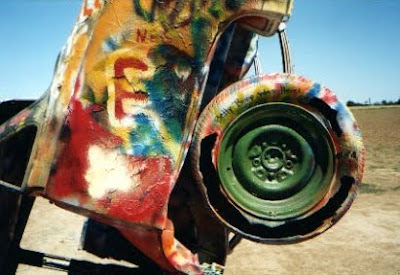 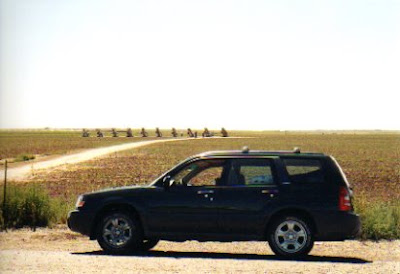 Our trusty Subaru Forester bowing at the altar of Roadside Gods.
I felt like posting a real eccentric roadside icon today and went digging through the Eccentric Roadside archives and found pictures from our 2004 visit to the Cadillac Ranch of Amarillo, Texas. If you've never heard of this place, you're just not paying attention. Here's a little history from wikipedia:

Cadillac Ranch is a public art installation and sculpture in Amarillo, Texas, U.S. It was created in 1974 by Chip Lord, Hudson Marquez and Doug Michels, who were a part of the art group Ant Farm, and it consists of what were (when originally installed during 1974) either older running used or junk Cadillac automobiles, representing a number of evolutions of the car line (most notably the birth and death of the defining feature of early Cadillacs; the tail fin) from 1949 to 1963, half-buried nose-first in the ground, at an angle corresponding to that of the Great Pyramid of Giza in Egypt. The piece is a statement about the paradoxical simultaneous American fascinations with both a "sense of place" — and roadside attractions, such as The Ranch itself — and the mobility and freedom of the automobile. It was originally located in a wheat field, but in 1997 the installation was quietly moved by a local contractor two miles (three kilometers) to the west, to a cow pasture along Interstate 40, in order to place it further from the limits of the growing city.

I admire the eccentric principals of its creators for first building it and then moving it to preserve its roadside je ne sais quoi. I read somewhere that a Cadillac dealer wanted it as its backdrop and he was going to locate his dealership in front of the Ranch and that was why the Ranch was moved -- to keep it in its own unpolluted flat farm environment. I'm not sure if that's true but it makes for a good anecdote.

A loving tribute was paid to the Ranch in the movie Cars. If you haven't seen that movie, by all means do. We give it 5 out 5 Eccentric Roadside Idaho Potatoes.

Even though it's not on public land and you have to drive down a dirt access road to get there, people from all over the world visit it in droves. It's one of the few public places where graffiti is encouraged. When we were there I asked another tourist to snap our picture. When I thanked him he cheerfully said "anytime." So I guess this means any time we're at the Cadillac Ranch, he'll take our picture. Very generous of him.
Posted by Gunnar and Sherry at 3:24 PM

I loved the Cadillac Ranch! It's been a favorite of mine ever since I heard of it!

I also noted that you travel in a Subaru Forester, I can imagine that being a decent ride...I seem to like the Toyota Camry that we have used for the last 3 years, nothing can beat it!

And, the title, that is Dukes of Hazard??? I know I've heard that, but I can't remember if it is or not...I haven't watched Dukes in years...

There are a couple of Camrys in my family and they all swear by them too. We're partial to wagons, especially on long trips. We never go anywhere without a cooler! Not sure about Dukes of Hazard, but that's quality entertainment!

Eldorado fins, whitewalls and skirts
Rides just like a little bit of heaven here on earth
Well buddy when I die throw my body in the back
And drive me to the junkyard in my Cadillac.

Not quite as rare as a solar eclipse, but sometimes Gunnar and The Boss line up!

Bill: I actually am The Boss, which explains why you never see the two of us in the same room at the same time.

That makes Dave The Big Man?

HAHAHA! And Anne is Max Weinburg...

And Babs is that guy from the Sopranos.

I've got one more left in me and maybe you can close us out...and Lennahan is Patti Scialfa

That's perfect. I myself have referred to him also as "The First Lady of Love!"

The picture is so funny and beautiful