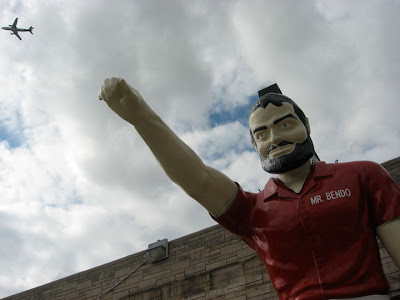 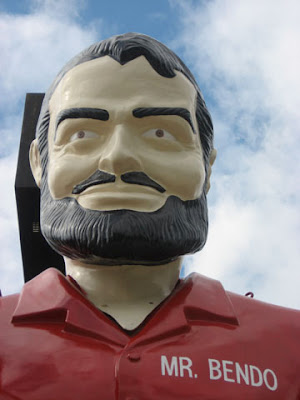 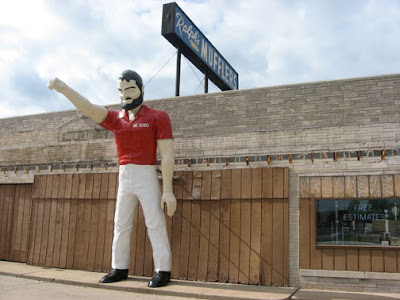 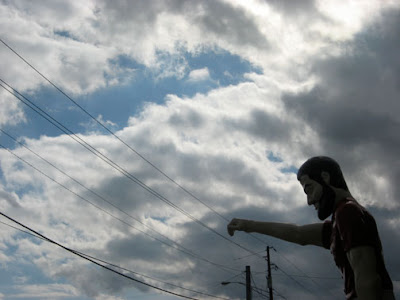 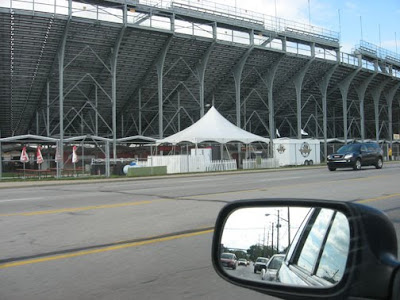 You can get a great view of the stands of the Indianapolis Speedway
just by driving down the main drag. Cool! 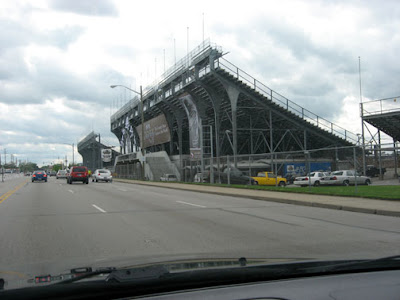 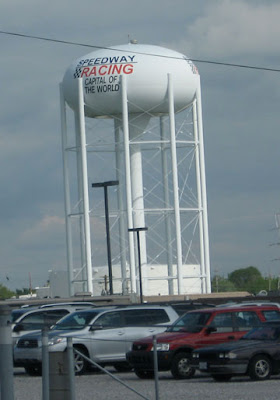 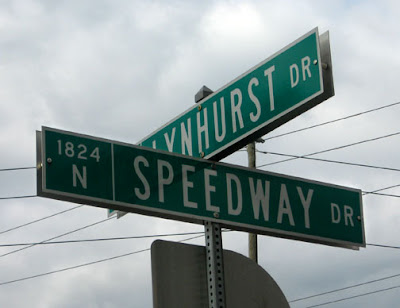 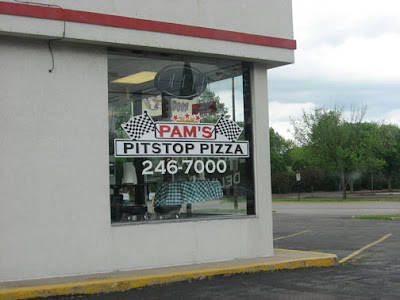 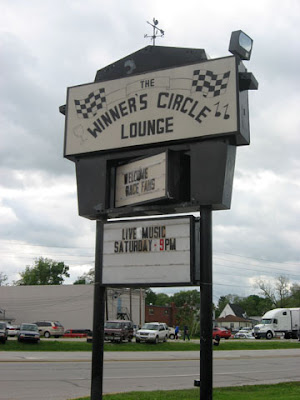 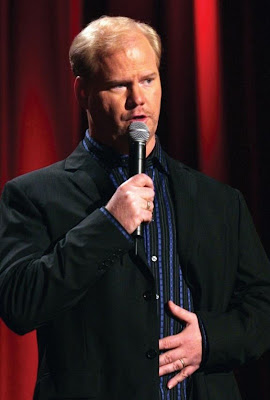 Jim Gaffigan: "I'm from Indiana.
I know what you're thinking: Indiana...Mafia."

On our last roadtrip, we passed through the great city of Indianapolis on our way from Illinois to Louisville and, due to time constraints, could not spend as much time there as we had hoped. Indiana seems to be underappreciated as a travel destination and this reminds me of what Hoosier comedian Jim Gaffigan said about his home state:

A guy came up to me after a show and said, 'Indiana? I drove through Indiana once.' I said, 'Yeah, I remember you. It was on the front page of the newspaper: Guy drives through Indiana.'

Maybe Indiana is just on the way to somewhere else for most people but we like it a lot and what we saw of Indianapolis in a just few short hours was great, especially if you like eccentric roadside attractions like muffler men and formula racing-themed pizza parlors. Ralph's Muffler Shop is home to Mr. Bendo, a bearded, red-shirted specimen of muffler manhood with arms in a weird "Heil, Fuhrer"-type pose. It's funny to see a muffler man in front of a muffler shop without him holding, oh, I don't know... a muffler, but muffler men are rugged individualists and prefer to go their own way. Ralph's is only three miles from the Indianapolis Speedway but I didn't know that until we were right in front of the track waiting for a red light to change and could hear a race in progress from the street. Quite a thrill. I'm always amazed when some famous landmark you've never been to winds up being smack dab in the middle of town. This was also true at Churchill Downs in Louisville.
According to roadsideamerica.com, there are several muffler men with the Mr. Bendo moniker, but I haven't been able to find out where the Bendo name comes from. If any muffler man aficionados out there in blogosphereland could solve this mystery, please chime in. I'll Bendo-ver backwards to give you credit (that joke took a long time to come up with and it still stinks).
Posted by Gunnar and Sherry at 5:46 PM

Mr. Bendo kinda looks like he's a franken-muffler. His 1 arm at his side like an Indian, other arm up like an Indian except the hand is curled. He's wearing a shirt, unlike an Indian and has the Bunyan head.

I like the Frankenstein comparison. That'd make a great horror movie: "Attack of the Muffler Men." It's alive...it's alive! IT'S ALIVE!!!

Great post! I enjoyed Indiana as well...though my experience in Indy was quite a bit different. The last time I passed through was during Superbowl two years ago, being from Chicago and a Bears fan, there was some frustration seeing the giant Payton Manning blow up at the RCA Dome...

Indiana has a bunch of interesting places...the most unusual thing I remember was the McDonalds diner in Lafayette...it changes everything you think of McDonalds...

I never knew there was a muffler man in Indy though....but, I can tell you this about the Muffler Man...

The name Mr. Bendo comes from the chain of auto body shops started in Chicago, at least that it my assumption knowing of it...

Also...I figured I would ask if I can use this muffler man for my collection on my blog also, as I did not already have it...

Random: No more calls, we have a winner! Thanks for the Mr. Bendo update and please put him on your blog with my compliments! I'll have to check out that McDonald's some time.