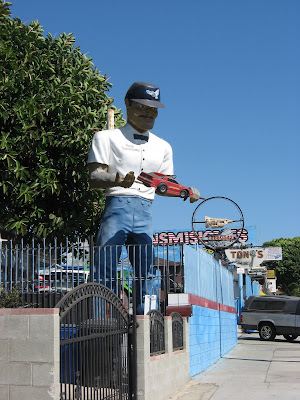 We were cruising around East L.A. with our good friend (and oddly distant relative) "Uncle" Stephen last September when what should appear off in the distance but a really swell Muffler Man. Muffler Men (MM) are legendary among those that follow eccentric roadside attractions. They're a rare breed of former advertising mascots from the 1960s that have been redistributed around the nation and given new leases on life by local, perhaps eccentric, merchants. Their crude, frightening faces draw you in and say "Hey Motorist! Yeah you! C'mon In! I dare ya!". This MM was in front of Tony's Transmissions on Cesar Chavez Boulevard and he was a handsome specimen. Made to look like an able (albeit, slightly insane) service man in natty blue pants and crisp white shirt with "Tony" embroidered on it, this guy had a robust south-of-the-border olive complexion and a rakish Burt Reynolds-style moustache. I begged we stop the car so I could photograph him baking in the midday L.A. sun and Uncle Steve cheerfully obliged. RoadsideAmerica.com is the ultimate source for researching and locating Muffler Men coast to coast. Their website is awesome. Visit them here: http://www.roadsideamerica.com/muffler/
Posted by Gunnar and Sherry at 3:29 PM