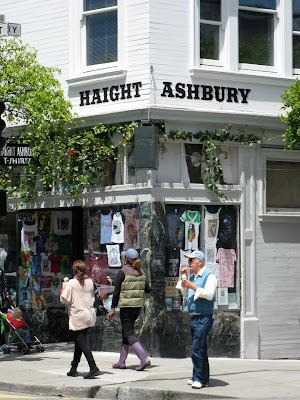 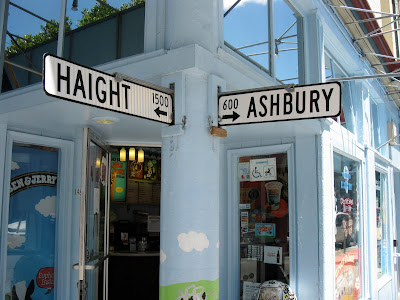 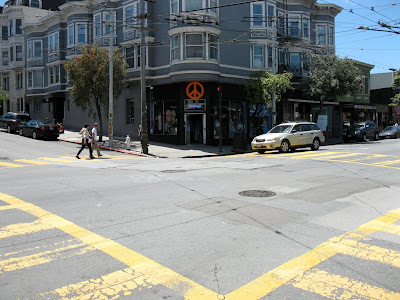 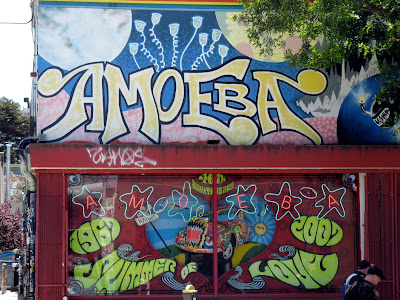 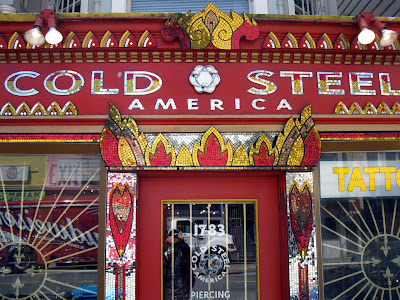 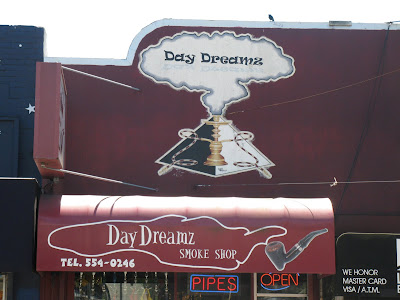 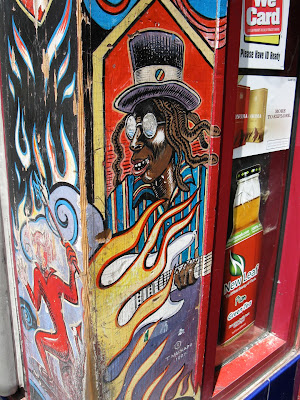 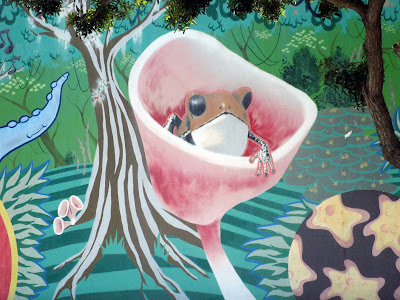 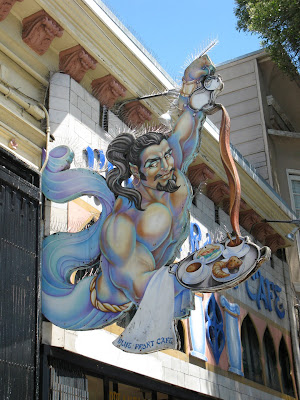 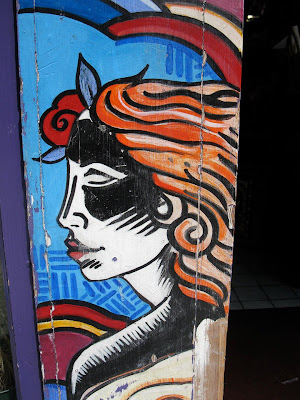 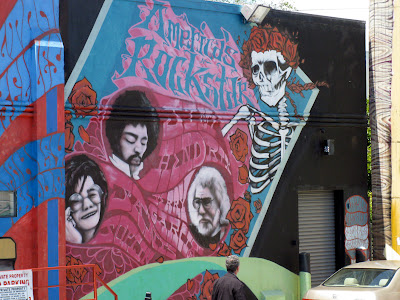 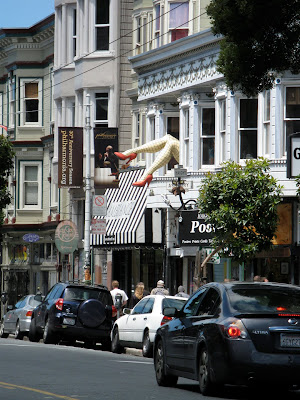 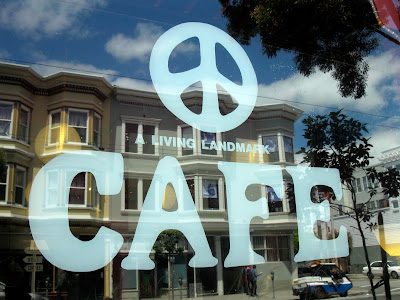 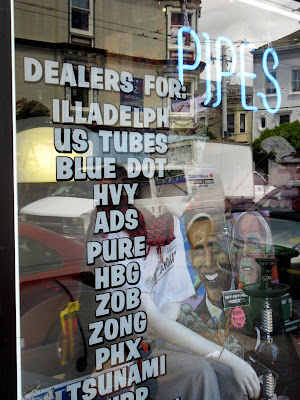 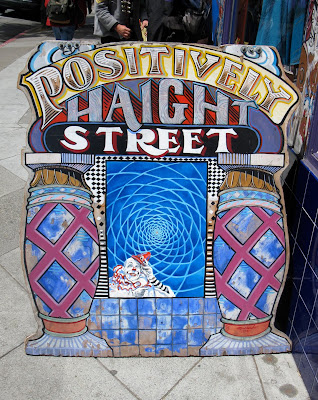 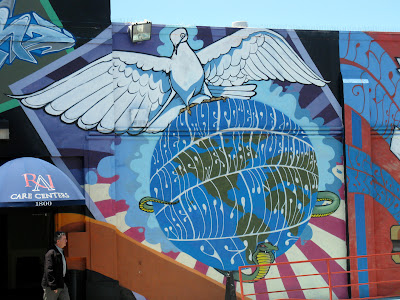 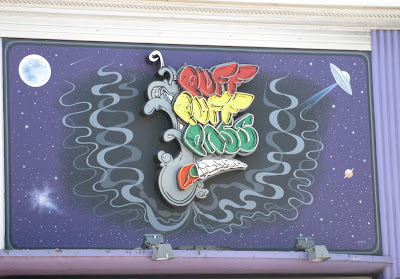 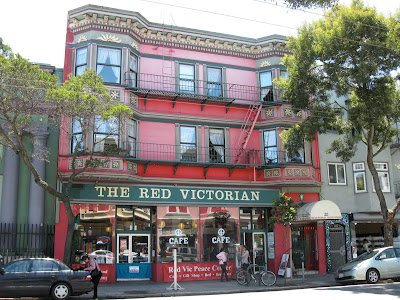 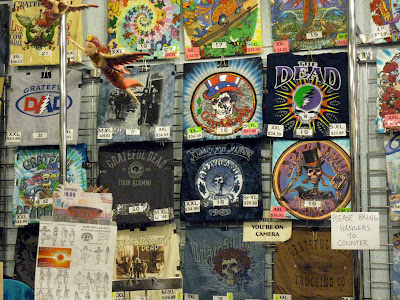 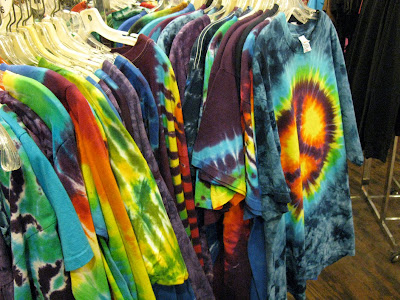 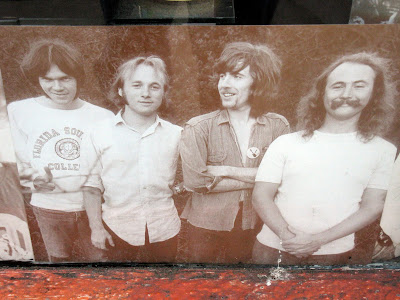 Hey, can I have some of your purple berries: a shop window displays Crosby, Stills, Nash and Young, back when their teeth were white and their hair was brown...
Forty-four years ago, as many as 100,000 young people crammed into San Francisco to make the scene, blow their minds and have an otherwise outta sight time in the world's grooviest neighborhood, Haight Ashbury. Popular as a hippie enclave because of its plentiful cheap rents in devalued Victorian houses, "The Haight" reached its pinnacle as the counterculture epicenter during 1967's "Summer of Love". Bohemia, free love and all the mind-altering substances one could consume were the order of the day, and the artists-in-residence included Jimi Hendrix, the Grateful Dead and Janis Joplin. Haight Ashbury gained national attention, with busloads of Middle Americans being guided through the circus-like atmosphere of the feared and misunderstood hippie. The downside of Haight Ashbury's notoriety were runaways, overcrowding, homelessness, drug problems and crime. By October of '67, many of the Summer of Love's participants left to resume their studies or "normal" lives and the local hippies sensed what a long, strange trip it had been and that their movement had played out. They staged a mock funeral for the "Death of the Hippie," telling would-be visitors to stay where they live and bring the revolution there. Haight Ashbury never did regain its counter-culture high, but it did remain a funky locale for artists and nonconformists, and today it still has the far-out flavor of the do-your-own-thing '60s, with some modern-day gentrification thrown in. There are lots of independently owned boutiques, smoke shops, curio emporiums and restaurants with psychedelically-festooned signs inviting you to come on in and let your freak flag fly. In an odd way, it's reminiscent of Colonial Williamsburg... an authentic recreation of an historically significant American village. Perhaps they need some hippie reenactors to explain the deeper meanings of "In-a Gadda-da-Vida" and point out proper hookah technique at Ye Olde Head Shoppe.

And one more thing: after you're done grazin' in the grass and before you feed your head on incense and peppermints and let the sunshine in, be sure to wear some flowers in your hair.
Posted by Gunnar and Sherry at 4:17 PM

I love San Francisco! A few years ago I went to Haight & Ashbury to see the iconic Hippie Haven. It still has a lot of its groovy charm. I especially liked those giant legs that pop out of that building. We ate breakfast at one of the restaurants and had the most delicious crepes! I would go back in a heartbeat!

Oh no, that's brilliant ... some multi-national conglomerate is going to steal your "williamsburg-like" idea :)

Oh no, that's brilliant ... some multi-national conglomerate is going to steal your "williamsburg-like" idea :)

Amber: I really like H.A. too...and all we saw of S.F!
Wendy: I like that: Hippie-World, where you go on a "magic carpet ride" without the carpet!