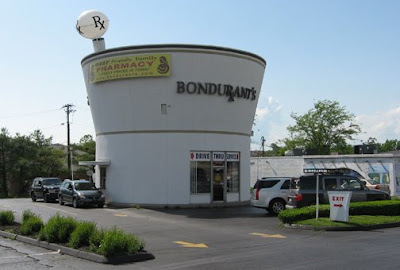 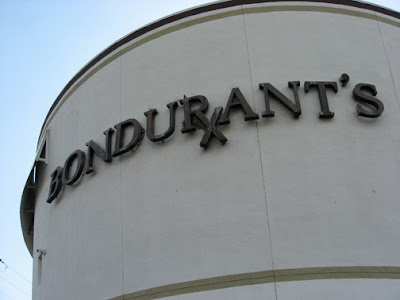 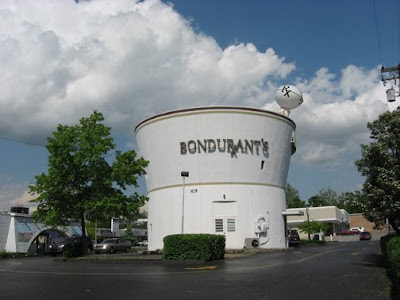 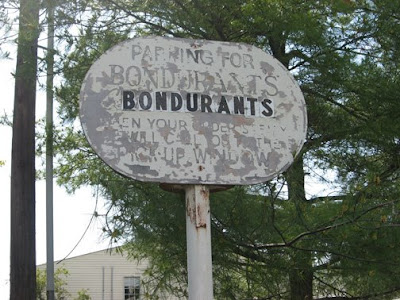 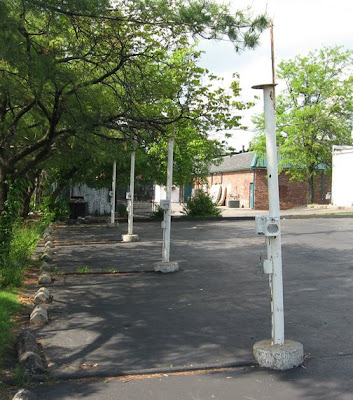 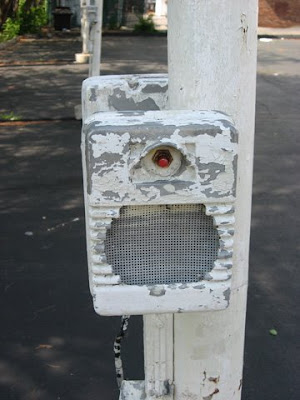 Lexington, Kentucky has a lot of pretty horse country with beautiful green fields and white fences. If you're a horse, this is where you want to be. Lexington also has a really great eccentric roadside attraction: a pharmacy in the shape of a giant mortar and pestle. Bondurant's Pharmacy sits in a shopping plaza parking lot and is an oasis from the boring box stores that dot so much of the landscape. It's 30 feet tall and 32 feet in diameter, and the pestle protrudes another 10 feet. Here's what the Bondurant's website has to say about it:

The giant round building with the ball on the top has been helping the residents of Lexington feel better since 1974. Nowadays, Eric Brewer owns and manages Bondurant’s which got its name from Joe Bondurant, a man who loved big ideas. After a trip to Las Vegas, Mr. Bondurant – already a pharmacist – decided to make his dream come true, a pharmacy shaped like a mortar and pestle. Eric and his family also have an earlier role in Bondurant’s history. “My dad built the model of this place using an old Kentucky Fried Chicken bucket.”

The parking lot behind the structure has a few eccentric relics: a drive-in theater-like speaker system where customers would park their cars. The pharmacist would announce when the customers' prescriptions were ready over the intercom. Customers would then come to the pick up window for their drugs. This is curious, since the store also has drive-up windows. Did the speaker system precede the drive-up? Or could you do both? And did they show coming attractions while you were waiting for your Erythromiacin? They stopped using the speaker system in 2000 as the decaying paint job will attest and this just adds to the glorious yesteryear look and feel of the place.

This is an admirable roadside structure, especially since it's from the '70s and not the '30s, the hey-day for buildings shaped like big things. Even the backyard speaker system was behind the times when they built it, as drive-in theaters were already beginning to fade by then. And my favorite feature about this place is the fact that there is a 2nd-floor apartment for the pharmacist, although it's never been used for that. What pharmacist wouldn't want to live in a giant mortar and pestle?
Posted by Gunnar and Sherry at 2:59 PM

That is pretty interesting...I might have to check it out...

This is real cool but I am surprised those speakers haven't been stolen.

And, ironically, the word verification is "storc"

Back when the store was built prescription labels were typed on an old typewriter. This took a little more time and we'd tell patient to pull back to #4 (for example) and we'd call them when their order was ready. Then they'd drive up to the pick-up window and get their Rx.
Now we have computers and there's no need for the speakers anymore.
Also... It took 25 years, but destructive kids finally cut and ripped all the wires out of those speakers... How times have changed.
E. Brewer
Owner
Bondurant's Pharmacy

Thanks Mr. Brewer! It's great to hear about your wonderful place straight from the horse's (or pharmacist's) mouth.