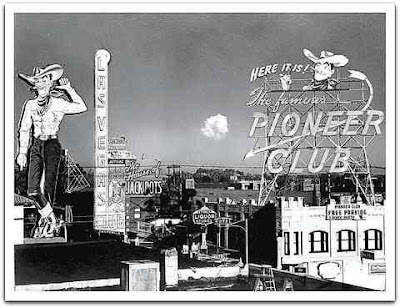 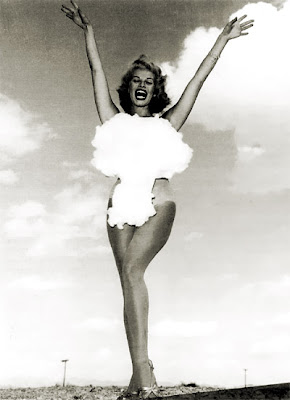 Miss Atomic Bomb, 1957
One of the better eccentric roadside attractions we recently visited in Las Vegas was the Atomic Testing Museum. You don't think of Vegas as being much of a museum town, especially science museums, and yet this is one of the best science museums I've ever been to. It's run by the Smithsonian, so already you know this ain't no carnival on the edge of town. The reason the museum is in Vegas is because Vegas figured prominently in the testing of atom bombs from the late '40s on. So little was known of the bombs' effects that they used to fire them off within sight of the old downtown casinos and their oblivious gambling denizens (see the photo above). They also had bleachers for VIPs to get a good goggled-protected look at the mushroom blasts while seated in comfort. Irony and naivete abounds. There are cartoon reels depicting a glorious nuclear-based future. After all, splitting the atom was going to mean we would never have wars, sickness or fuel shortages again. There's a great collection of atom-based pop culture items (comic books, breakfast cereal) and also a wall full of many different models of Geiger counters. I love those things when they're clacking away. Who knew there were so many varieties and styles? They smartly play up Miss Atomic Bomb of 1957, an actually beauty pageant winner, complete with a mushroom cloud bathing suit and giddy what-me-worry expression. There couldn't possibly be a better place to be than America in the '50s. Check out the museum's website and don't miss it when you're in Vegas: http://www.atomictestingmuseum.org/

Posted by Gunnar and Sherry at 1:56 PM