I'll take that as a condiment: The World's Largest Catsup Bottle of Collinsville, Illinois 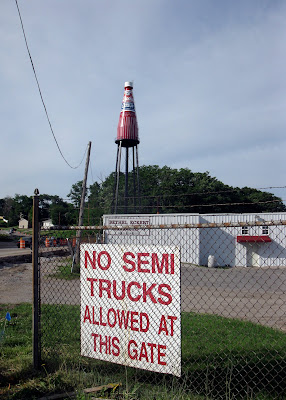 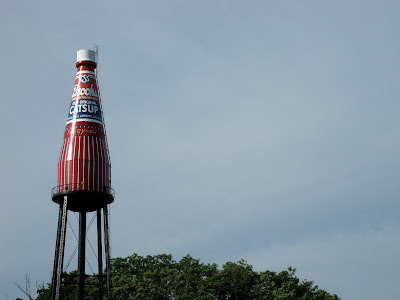 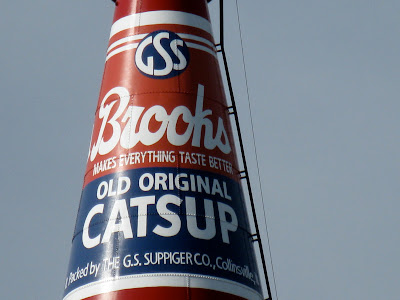 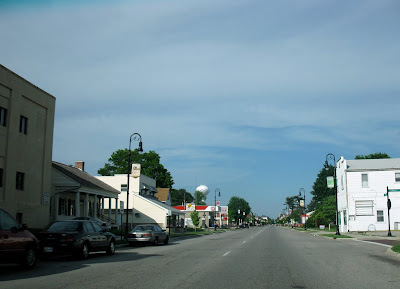 Collinsville is a cute little town... 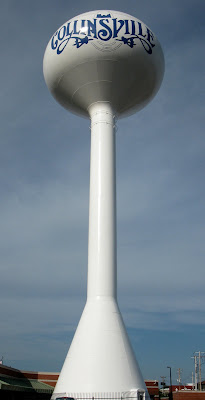 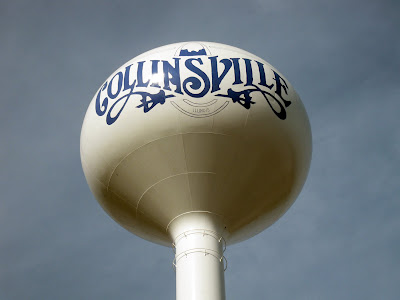 ...and they've got another nice, albeit more traditional, water tower. 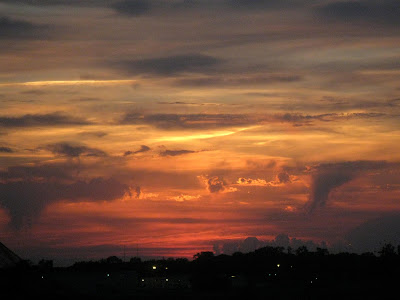 They know how to put on a nice sunset, too.
We're big fans of water towers here at Eccentric Roadside and there's a Grade A Fancy one in the pleasant St. Louis suburb of Collinsville, Illinois. In 1949, the bottlers of Brooks Old Original Rich and Tangy Catsup commissioned the W.E. Caldwell Company to build a 100,000-gallon water tower next to their Collinsville plant. Not ones to miss a marketing opportunity, they designed their tower to closely resemble their slender, tapered catsup bottle, making it a giant condiment in the sky. The Brooks brand had great success and in 1959 the company merged with another. Bottling operations were moved to Indiana but the bottle tower remained in Collinsville. By 1993, the current owners wanted to sell the property and the bottle's future looked doomed. This is when a group of Collinsville's bottle-lovers formed the Catsup Bottle Preservation Group. The catsup company agreed to deed the tower to the town of Collinsville, but the town balked at the cost of painting and maintaining the tower, so the preservation group began a two-year fund raising drive (complete with a visit by the Oscar Meyer Wienermobile) that resulted in the eventual designation of the tower on the National Register of Historic Places. They've had a yearly catsup festival for the last 13 years, complete with a hot dog eating contest, musical chairs, a please pass the catsup tournament, and the crowning of Little Princess Tomato and Little Sir Catsup. Next year's event is scheduled for July 8, so mark your calendars.

You mayo may not realize it but it's great to see how, when in a pickle, a local group can mustard the strength to overcome adversity and relish their victory, if you catsup my drift.
Posted by Gunnar and Sherry at 3:01 PM

Thanks for sharing this great content, I really enjoyed the insign you bring to the topic, awesome stuff!
Orange county property

You forgot one pun in your SAUCY post...thank you, thank you very much!

Thanks for ketching up with me, Amber!

Many thanks for such a write-up. I undoubtedly cherished reading it and talk about this it to
banff accommodations