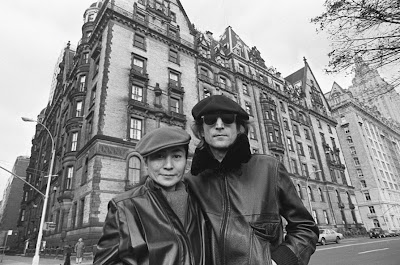 The Dakota's most famous residents in 1980 (photo by Allen Tannenbaum)... 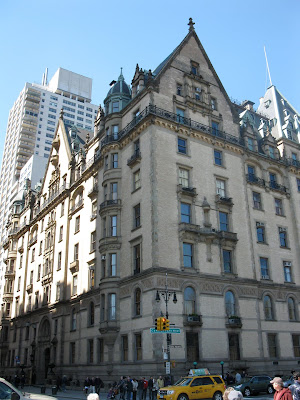 ...and the building as it looks today. 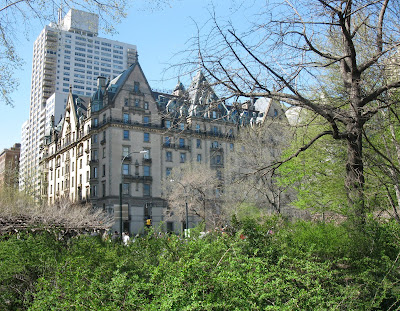 At one time, the Lennons owned the top floor with the iron balconies (at least that's what one of the natives told me). 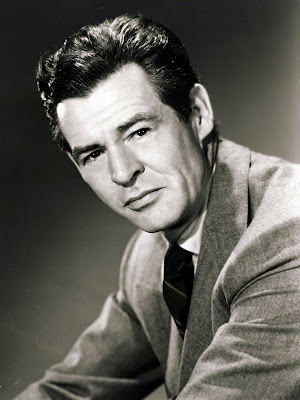 The Lennons were first introduced to the Dakota through an apartment they sublet from tough-guy actor Robert Ryan. 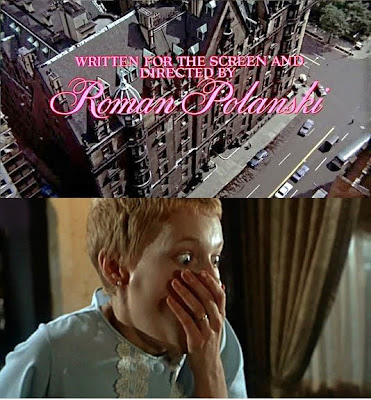 Its exteriors were also used in the 1968 horror movie "Rosemary's Baby". 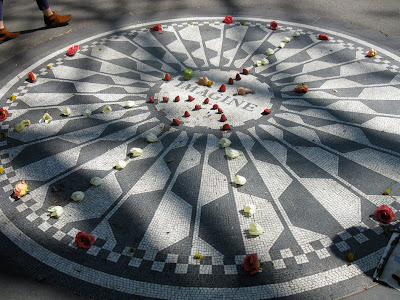 Strawberry Fields is across the street from The Dakota and has this lovely mosaic which was donated by the city of Naples, Italy. 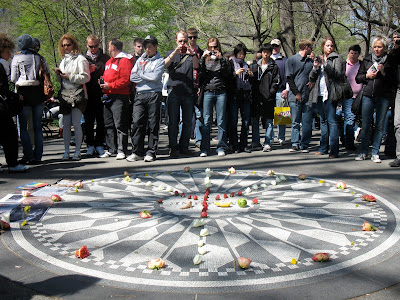 A crowd of people stood and stared.

Lennon's activist spirit lives on in this political button kiosk at the entrance to Strawberry Fields. 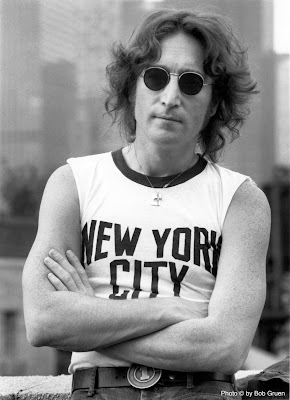 Photographer Bob Gruen bought this now famous t-shirt for $5 at a souvenir stand, cut the sleeves off and asked Lennon to put it on for this iconographic 1974 photo. 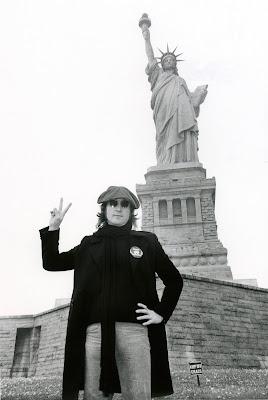 Gruen also shot this famous photo. Kinda nice to see John acting like a tourist. Also love the ironic "Keep off grass" sign, since the U.S. Government tried to deport him for marijuana procession.

John Lennon loved New York City. His residence for the last seven years of his life was the famous 1880s co-op apartment building on New York's Upper West Side called The Dakota. It is believed that the building got its name because its original owner, a Mr. Edward Clark, had a fondness for the new western territories of the United States at that time. Many famous people have lived there, including Lauren Bacall, Judy Garland, Leonard Bernstein, Jack Palance and Boris Karloff. Just being famous isn't enough to get you in these days, though, as Billy Joel, Gene Simmons and Antonio Banderas have all been turned down by the board. Lennon and his wife, Yoko Ono, got into the building through an apartment they sublet from actor Robert Ryan ("The Wild Bunch") and eventually bought a floor of apartments in the building. Sadly, the building got worldwide notoriety when Lennon was shot and killed by a crazed fan in the Dakota's entry way in 1980. To honor Lennon, and with the financial help of Yoko, the city created a memorial area out of 2.5 acres of Central Park directly across from the Dakota. The centerpiece is a mosaic with the word "Imagine" inlaid that fans and tourists can visit and remember Lennon by. It's a nice place and was surprisingly crowded on the April Sunday when we visited. Nothing to get hungabout, though.
Posted by Gunnar and Sherry at 11:20 AM

Strawberry Fields is a perfect tribute to John Lennon. I also like the memorial benches that surround the 'Imagine' mosaic.

I miss him too.

I agree or as John would say:

I think a "no" will mean a "yes" but it's all wrong. That is I think I disagree.

That's more that I ever knew about John Lennon in NY! Nice post :-)