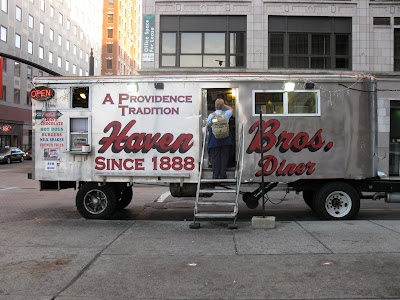 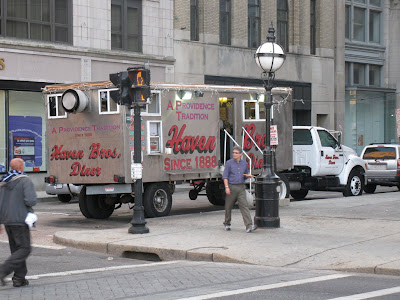 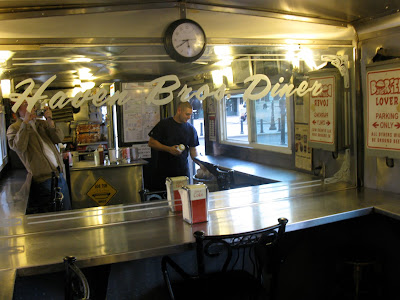 I tried but I couldn't get out of the picture. 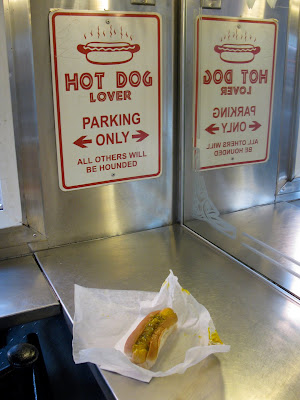 No more calls, we have a wiener. 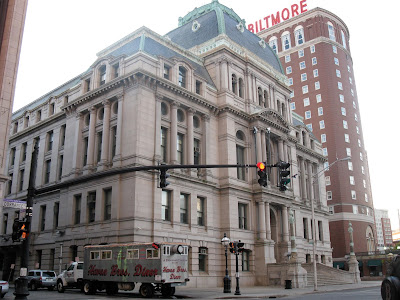 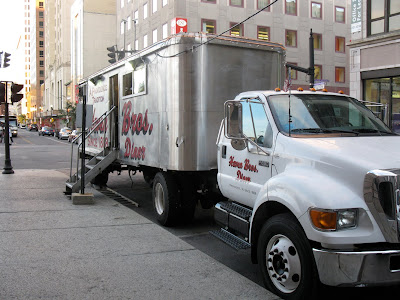 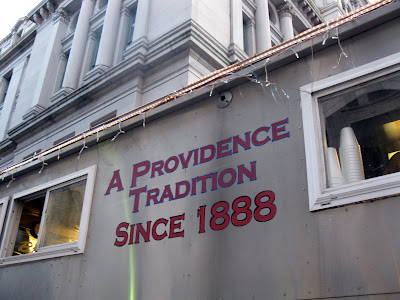 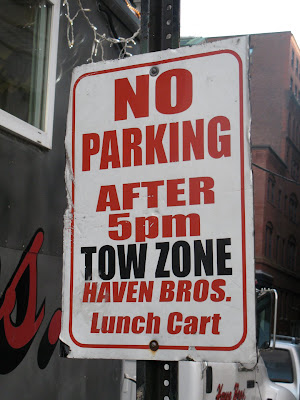 Providence, Rhode Island is sacred ground to diner lovers because this where it all began in 1872, when Walter Scott parked a converted horse wagon around various Providence businesses to sell prepared food to busy shift workers. A living, breathing descendant of that pioneer diner era exists today at Haven Bros., one of the oldest restaurants on wheels in the country and an Ocean State icon that's been in business since the late 1800s. Originally a horse-drawn cart, today's Haven Bros., a 1949 Fred W. Morse silver dining car pulled by a Ford F650 truck, sits next to Providence City Hall in a reserved spot from 4:30pm to 5:00am, serving good grub to everyone from well-dressed politicians to afterhours nightclubbers, college students, and sanity-optional denizens of the wee hours (it sits open for business in another Providence location the rest of the day). Inside, it's decked out in gleaming stainless steel over 8 x 14 feet, with ample seating if there aren't four people in there already (reservations are not accepted, casual attire, no waiter service). They've got good diner fare including hot dogs, hamburgers, lobster rolls and steak and cheese sandwiches, and to drink, there's the quirky regional favorite coffee milk (like chocolate milk but flavored with coffee instead). And if you really want to fit in with the natives, order a "coffee cabinet" -- Rhode Islandese for a coffee-flavored milkshake. The Haven Bros. diner made a one time only out of town appearance in 2008 in New York City on NBC's Today Show, when Matt Lauer and Meredith Vieira, who both coincidentally worked in Providence early in their careers, named Haven Bros. as their favorite "Taste of our Past." So if you're ever in Providence, treat yourself to a little slice of Haven -- your cabinet awaits.
Posted by Gunnar and Sherry at 3:27 PM

I will admit that this is on my list, but I've never been in. This year for sure!

I like the old Airstreams revamped but the dinig car is great. Another tradition preserved and reserved parking. Very cool.

"No more calls, we have a wiener."

It's photo captions like this that make me your #1 Fan :) LOL