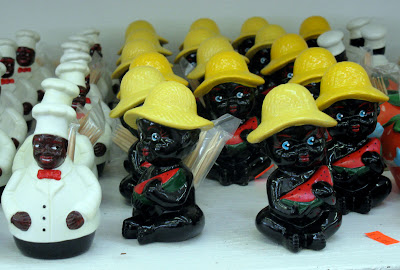 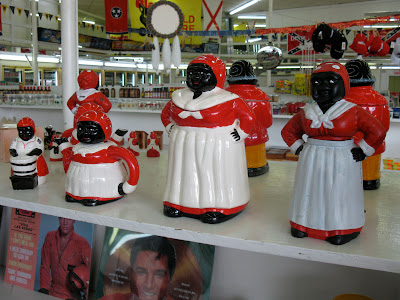 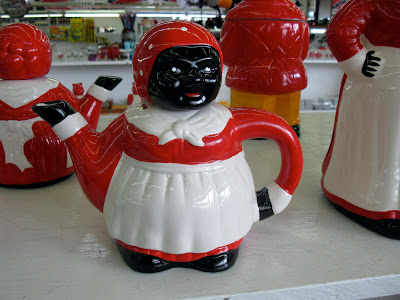 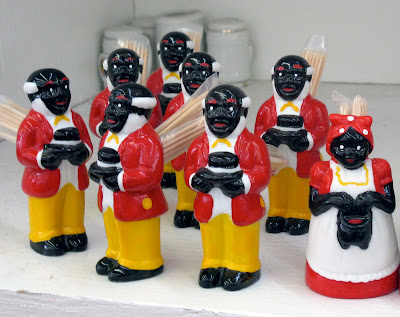 As an eccentric roadside traveler unfamiliar with the deep south, I had a preconceived notion of what a 7-day driving trip through the region would have to offer visually. I pictured a Confederate flag flying from every flagpole and a "Git-R-Done" bumpersticker on every car. That was stupid. I saw virtually none of that the whole time I was in Tennessee, Alabama, Georgia, Mississippi and Louisiana, with the exception of one stop I made heading south from Nashville to Chattanooga on Interstate 24. Two giant fireworks emporiums sit at the bottom of Exit 152: Big Daddy's and Tennessee-Alabama Fireworks. Both have a fine array of retail explosives, billboard-sized signs on their fronts and a smattering of souvenirs to impress the folks back home, but only Tennessee-Alabama dealt in what I was craving: taste-questionable merchandise. Mixed in among the Confederate flags, Civil War icons and framable Elvises was a jaw-dropping display of ceramic Mammy teapots, old-black-manservant salt shakers and smiling-little-black-boys-eating-watermelon toothpick holders.
Watermelon.
In 2010.
Wow.
I consider myself a connoisseur of bad taste and, for my money, this tops them all. An about.com page by Barbara Crews has this to say about this kind of memorabilia:
Although many people consider black memorabilia to be offensive and insulting, it might surprise you to find out many big-time collectors of black memorabilia are, in fact, of African American heritage. Celebrity collectors include Oprah Winfrey, Spike Lee, Bill Cosby and Billy Dee Williams. And oft-times these collectors look for and acquire the most offensive and slave-related pieces. Why? According to Philip Merrill ("Antiques Roadshow" guy), it's a way to remember and preserve the past, and to make sure history is not repeated.
Okay, I feel a little better, now that I know Spike Lee is on board with this. However, these pieces aren't antiques -- they're newly minted. Call me politically correct, but it's hard to picture a factory churning out black-people-eating-watermelon figurines in 2010.
Posted by Gunnar and Sherry at 5:23 PM

It is 2010, isn't it? I thought maybe I had accidentally stepped back in time.

In this day and age... I can't believe they are still producing this garbage.

I am looking forward to the day when this and so much other negative crap will stop.

But alas, I don't think I will see it in my lifetime.

When I was in Arizona, I saw a sign for a Mexican restaurant with a "Mammy" on it. I looked closer and realized it was a "Mexican Mammy." Apparently, it's not racist if you use one race's offensive stereotype to depict another race is a derogatory manner. Of course I also saw a sign for a drive thru liquor store in Phoenix, so perhaps I shouldn't be too surprised.