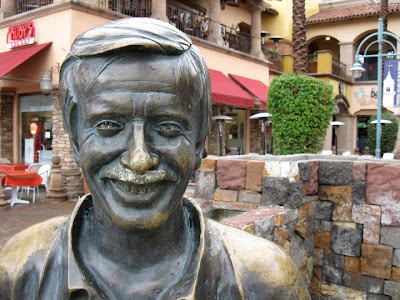 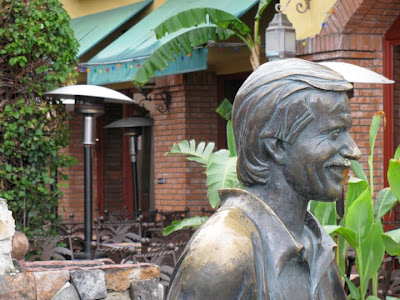 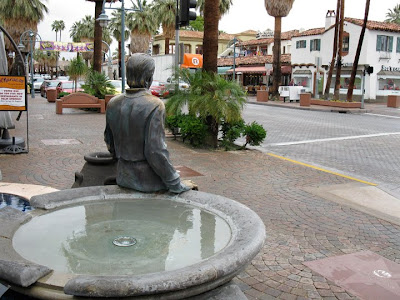 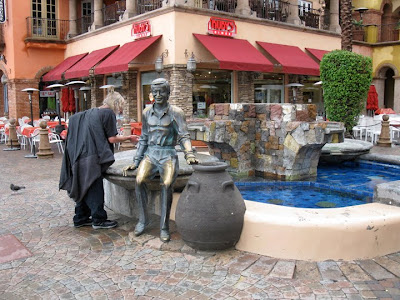 Sonny gives a big smile to a down-on-his-luck fellow fishing out coins. 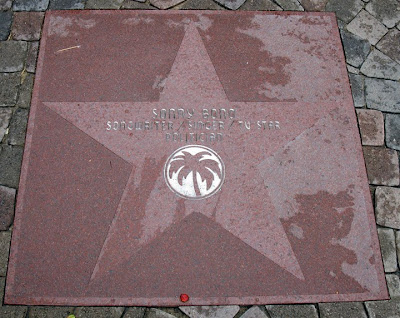 Sonny's Palm Springs Walk of Fame star was moved to a prominent location in front of his statue. 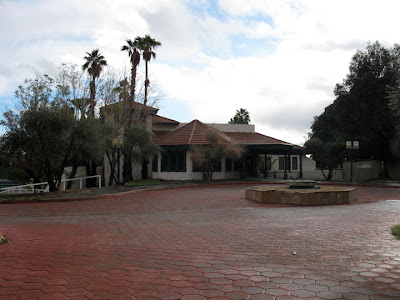 Sonny's Palm Springs restaurant, Bono's, sits vacant today.
Sonny Bono was an entertainer, songwriter, entrepreneur and the not-Cher half of Sonny and Cher. His showbiz career began by working with Phil Spector and co-writing the 1960s hit "Needles and Pins," then successfully partnering with Cher on records and TV, then solo work including more guest appearances on "The Love Boat" in the '70s than any other celebrity (by his own admission). Frustrated with zoning laws while trying to open a Palm Springs restaurant in 1988, he ran for mayor and won, serving until 1992. He later went on to represent his district in the U.S. Congress for four years until his untimely death at age 62 from a skiing accident (his widow Mary still holds his seat). He was a pro-business Republican and helped create the Palm Springs International Film Festival, still being held today in his honor. In 2001, the city paid tribute to him with a bronze statue in the heart of the downtown shopping district at Plaza Mercado on South Palm Canyon Drive. There he sits with a big grin by a coin fountain looking out at his constituents in a puffy open-collared shirt and high-waisted pants, proving it's forever Sonny in Palm Springs.
Posted by Gunnar and Sherry at 5:19 PM

Thanks for your time!
Elaine

Hi Elaine,
Thanks for stopping by. Wow...you're really raising the intellectual quotient of this blog with your thoughtful questions! First of all, I love this statue because it was done out of love...the people who comissioned it obviously really loved Sonny. As a piece of art, the statue to me seems a little goofy, but that's okay because Sonny's showbiz persona was goofy, often making himself the butt of jokes. It's also comical how his nose is so shiny and bright...perhaps from people rubbing it for good luck. I think the statue communicates "here is Sonny sitting in the town he loved looking out at the passers by and smiling". He also seems to have a "Can you believe a guy like me became mayor? What a country!" expression. As far as the statue's purpose, I think it's there to both pay tribute to Sonny and bring tourists and the public to downtown Palm Springs. How appropriate that a showbiz figure would become mayor and be honored in a town known for showbiz types.
That's my story and I'm sticking to it!