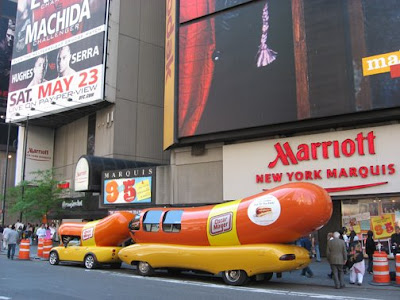 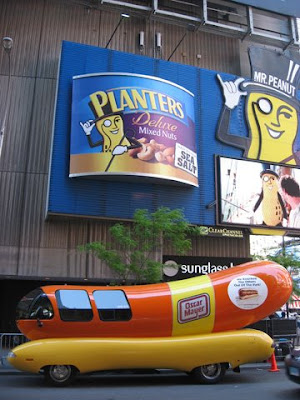 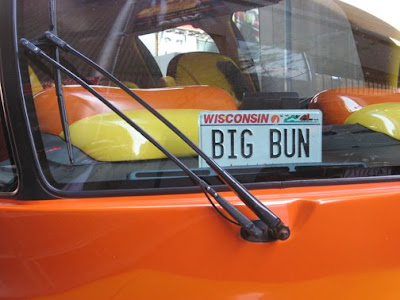 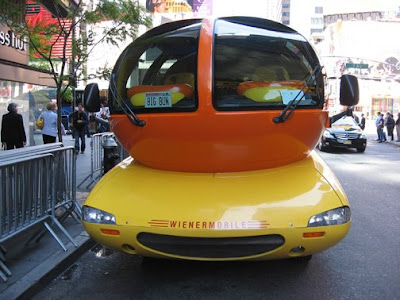 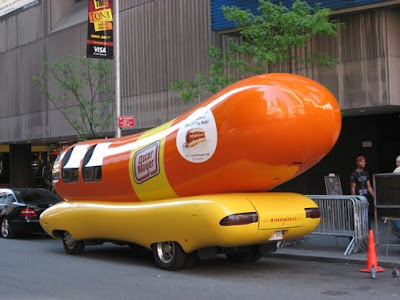 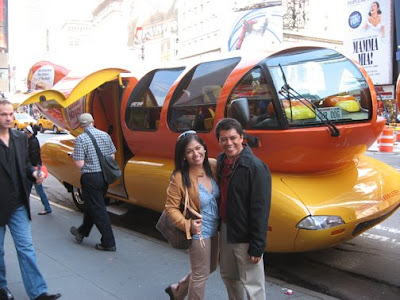 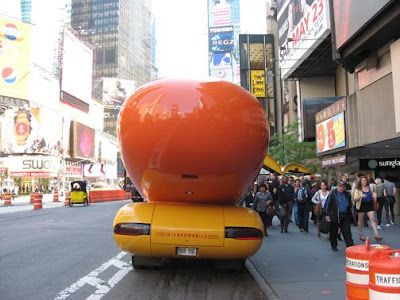 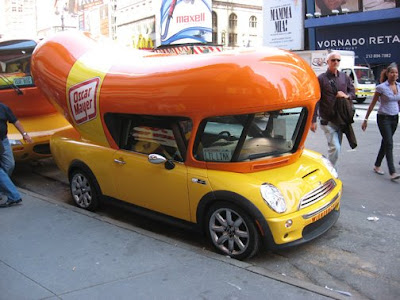 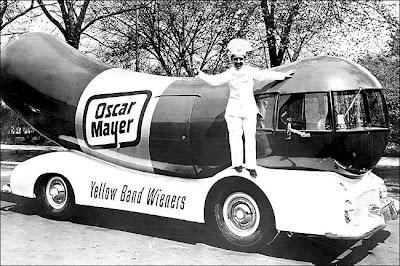 George Molchan as Little Oscar in the 1950s. 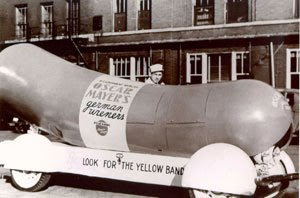 The first Wienermobile, 1936.
New York City's Times Square is a too-much-is-never-enough kind of place and one of the few places where an Oscar Mayer Wienermobile seems small. What's a luncheon meat marketing department to do? Park three of them there! Among the towering neon and hustle and bustle of tourists and grifters, we spotted "Our Dog" and "Big Bun," two traditional Wienermobiles, and "Lil Link," a Mini Cooper adapted into a much smaller version of the classic hot dog vehicle. They were a little hard to photograph because the place is so thick with Wienermobile-loving people flocking to get their photo opportunity with an oversized motorized frankfurter. Oscar Mayer premiered the Wiernermobile in 1936 and has updated the design several times since then, although today's models still have a certain swoopy Jetsons design quality about them. For three decades, they employed height-challenged actor George Molchan, dressed as a chef, to portray Little Oscar, the company mascot, and travel the country in the Wienermobile spreading company recognition and bologna-friendly goodwill (when he died, 50 mourners sang a chorus of the Oscar Mayer jingle at his burial as the Wienermobile was parked nearby). I'll be frank with you, it was a thrill to see those Wienermobiles, and that's no baloney.
Posted by Gunnar and Sherry at 11:16 AM

I've got ya beat: here are four Wienermobiles across the street from the MGM Grand in Las Vegas in 2006.

Buzz: Wow! I wonder if somebody won them all in a crap game!

Oh, that's awesome! I saw the big Weinermobile twice, both of which were on the road and I couldn't get my camera in time. Thanks for sharing those pics! LOVE LOVE LOVE the Weinermobile and.. you have a great blog!

Thanks, Fuzzy! You've got an awesome blog too. I'm looking forward to catching up with it.