Springfield, Illinois' Tomb of Mr. Accordion, where you can pay your respects accordionly 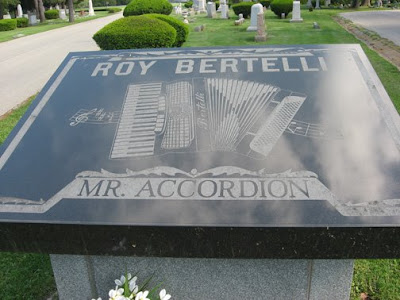 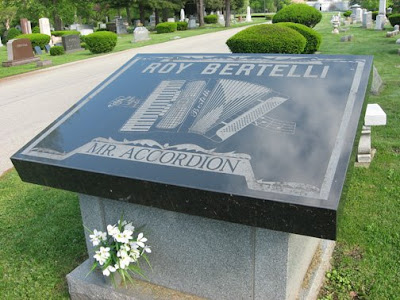 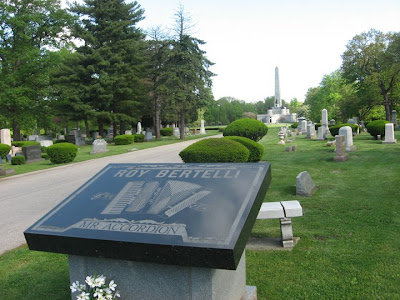 That's Lincoln's Tomb in the distance. 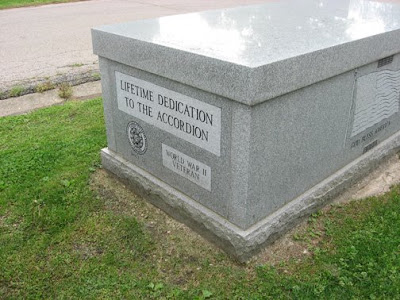 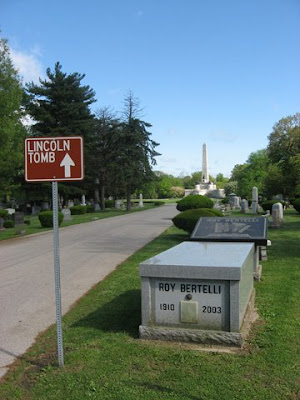 You can't help but think that Lincoln would have been amused.
Seems like every town in Illinois, Kentucky and Indiana has an Abraham Lincoln claim-to-fame, but nowhere is more Lincoln-centric than Springfield, Illinois. The city's pretty Oak Ridge Cemetery is where Lincoln's vast tomb is located... a hallowed, sacred place. It is also the location of a tomb of a more eccentric nature. Roy Bertelli, aka "Mr. Accordion," has the primest piece of cemetery real estate, excluding Old Abe's, of course. In a triangular plot at the cemetery's entrance sits his tomb with its large crypt and granite tablet depicting an accordion playing a happy tune. There is a back story to all of this reverence, however. Seems after Mr. Bertelli bought his plot, the cemetery informed him it was sold to him by mistake. They then threatened to take him to court if he did not give it up. This got Mr. Bertelli's Irish up. As a World War veteran he felt disrespected and decided to build his tomb above ground. Upon its completion, he would stand on top of it and serenade cemetery visitors with accordion pieces from time to time before descending up to that big Polkabration in the sky in 2003. It's quite a sight to see and adds an unexpected bit of whimsy to a very serious place. Nobody pulls a squeeze play on Mr. Accordion. Nobody.
Posted by Gunnar and Sherry at 4:56 PM