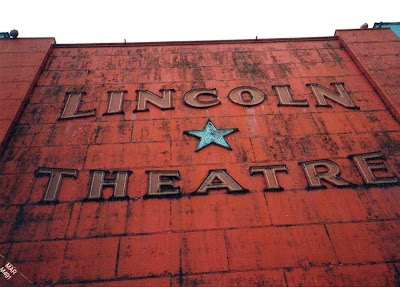 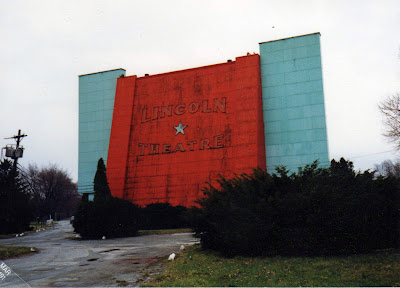 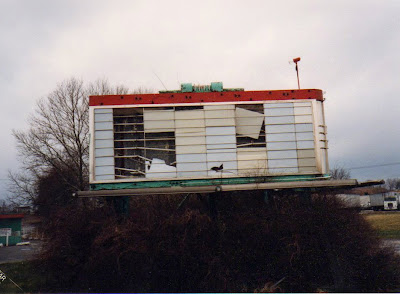 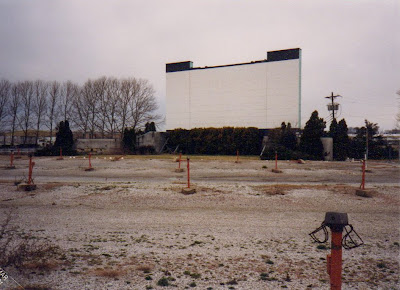 I was rummaging through some old photos and came across some striking pictures I took of an abandoned drive-in movie theater in 1991. I made no indication on the back of the prints where they were shot, but as best I can figure, they are the Lincoln Theatre of York, Pennsylvania. We were in that area around that time, as I recall, because Sherry's cousin Bobby was getting married in southern Pennsylvania, and I also remember it was kind of rainy on that trip. I consulted the excellent website driveintheater.com and they list a Lincoln Drive-In in York, so it makes sense to me. I can never resist taking pictures of drive-in theaters if it's at all possible without causing a 10-car pileup or being shot at by an angry land baron in the process. They're so, so cool in so many ways, bringing back happy childhood memories. I also love the weird irony of these big, once-gleaming, hulking icons of the past rotting away. I would imagine by now the Lincoln is long gone and a Staples or Home Depot now sits where snack bars and pajama-clad kids, Moms and Dads on a budget, and young lovers once frolicked. If someone out there can verify or enlighten me a bit further about the fate of this grand old lady, I'd love to know.
Posted by Gunnar and Sherry at 1:07 PM

As you can see, I get all your posts. Go into your blog layout and click on "Add Gadget" click on followers it will add this to your sidebar. Then people can just click on "follow this blog" and they will automatically get updates.

Thanks Richard, but something weird is still going on. My most recent update of my blog is still from 2 months ago and I think that may be the case with some other followers, so I guess I need to investigate further. I'm not a very technical person as you might have gathered! Thanks for your help.

Hey, found your blog & I know it's a few years old now. I live in the area & remember going here when I was young in the 80's with my parents. The screen was torn down sometime in the late 90s & is now a truck/RV dealership.