Cool stuff from the National Archives: When Elvis met Nixon 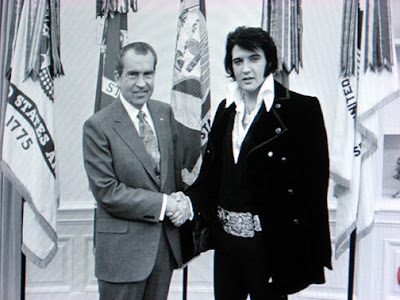 America is an eccentric place, full of eccentric people. Need proof? Check out this factoid from George Washington University's website: "Of all the requests made each year to the National Archives for reproductions of photographs and documents, one item has been requested more than any other. That item, more requested than the Bill of Rights or even the Constitution of the United States, is the photograph of Elvis Presley and Richard M. Nixon shaking hands on the occasion of Presley's visit to the White House." On December 21, 1970, Elvis visited Nixon at the White House. The two had never met before. On a flight, Elvis wrote Nixon a rambling six-page letter (on American Airlines stationery) requesting a visit with the President and suggesting that he be made a "Federal Agent-at-Large" in the Bureau of Narcotics and Dangerous Drugs (ironic, considering Elvis's later problems with pills). He presented this letter in person, unannounced, to Nixon's bewildered staff who arranged for a quick meeting with an even more bewildered Nixon. At the meeting, Elvis told Nixon what an admirer of his he was and mentioned that he had been studying communist brainwashing and the drug culture for 10 years. He also condemned the Beatles, and presented Nixon with a gift: a Colt 45 pistol that Presley brought with him to the Oval Office. Nixon presented Elvis with a phony-baloney badge of some sort that the White House staff had hurriedly put together which brought Elvis to tears. A White House photographer recorded the event and Elvis, being Elvis, left the building. And for once in his life, Richard Nixon was not the weirdest fellow in the room. To order a copy of the Elvis-Nixon photo of your very own from the National Archives, click here: http://www.archives.gov/exhibits/nixon-met-elvis/assets/doc_citations_transcript.html.

Posted by Gunnar and Sherry at 1:51 PM

Elvis was blitzed outta his mind on prescription drugs when he met Nixon. Jeez look at those eyes (on Elvis) LOL

I can't believe they let him into the White House with a gun, too! Those were the days.

Being a huge Elvis fan I went to Graceland about 5 times. I loved his police badge collection. I think Nixon gave him a DEA badge too!

Graceland is a great eccentric roadside attraction. I was surprised it was in such a dicey neighborhood, though. Maybe the guy that Lisa Marie and Priscilla sold the Elvis name to will spruce it up a bit.