They say it's your birthday: Louisville, Kentucky's "Happy Birthday To You" song plaque 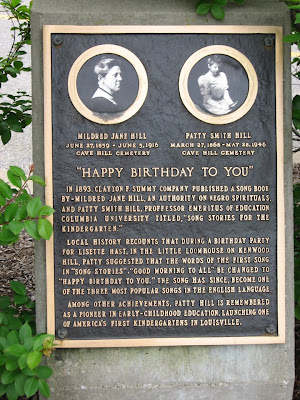 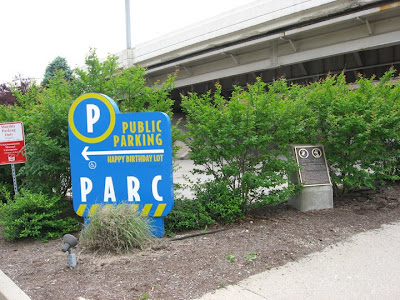 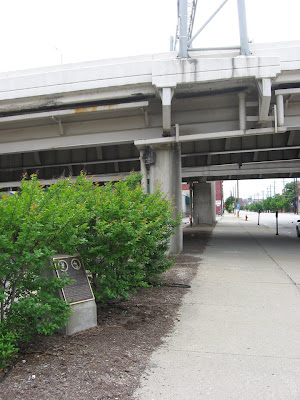 I'm not sure this is what the Hill sisters had in mind.

Before we leave that great stretch of Louisville, Kentucky's Main Street that has the giant Louisville Slugger and Caufield Novelty Company bat (see previous post), there's one more eccentric roadside attraction nestled in between those two that I don't want to leave out. Underneath the overpass of Interstate 64 and attached to a parking lot sits a plaque in honor of two kindergarten-teaching sisters from Louisville who composed the "Happy Birthday To You" song. Patty and Mildred Hill wrote a tune in 1893 called "Good Morning to All" that was easy for their young students to sing. It had the melody of what later became "Happy Birthday To You," which first appeared as a song in print in 1912. In 1924, "Good Morning to All," with "Happy Birthday to You" printed as an optional second verse, was published. Oddly, the song was copyrighted much later in 1932 but with Preston Ware Orem and Mrs. R.R. Forman as the composers. A third Hill sister, Jessica, believing that Patty and Mildred should have the credit and profit for the now very popular song, fought for and won legal copyright to her sisters for their song, and it was officially published in 1935 as "Happy Birthday." In 1990, Warner Chappell purchased the company owning the copyright for $15 million, with the value of "Happy Birthday" estimated at $5 million. This company charges as much as $10,000 every time the song is used in movies, TV and recordings, or performed live commercially. The current copyright doesn't elapse until 2030. This explains why the waitstaff at TGIFridays doesn't sing the Happy Birthday song but some other tune like Yankee Doodle with birthday lyrics to your Grampa Joe on his big day. I'm not sure why the plaque was placed in such an odd spot. There doesn't seem to be much foot traffic through here and cars driving by will never notice it if they don't know its here already. Perhaps their kindergarten was in this spot all those years ago. So the next time your friends and loved-ones favor you with "Happy Birthday To You," the world's longest song when it's in your honor and you've got nowhere to look but the cake, remember the Hill sisters of Louisville.
Posted by Gunnar and Sherry at 2:06 PM

who knew? How did you find it?

Rick: I never would have known it was there if not for roadsideamerica.com. They are the absolute best source for all of this stuff!

Richard: Thanks! America always seems to have the best quirky history, doesn't it?