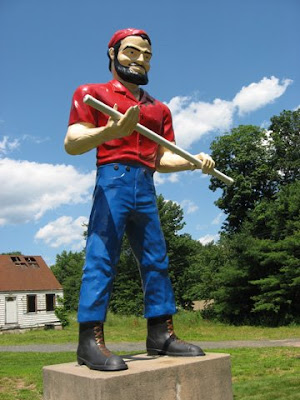 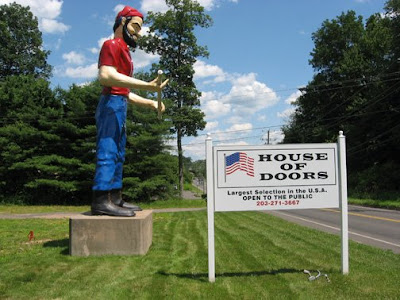 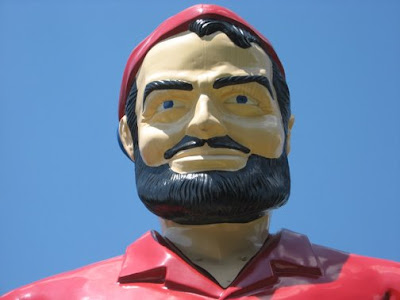 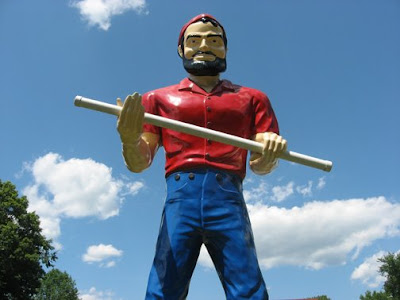 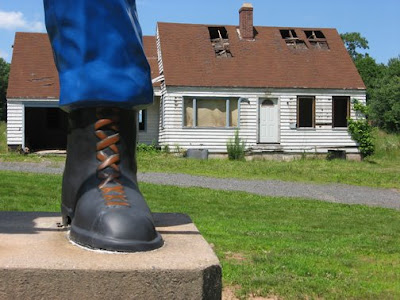 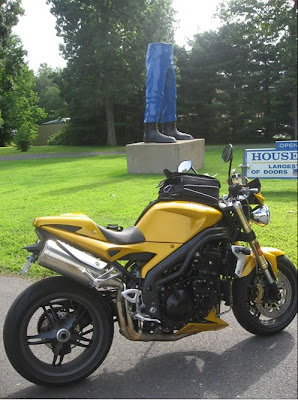 Here's the Chesire Muffler Man when he was half the man he used to be. Fortunately, he's been restored and refurbished to better than ever condition. (This picture comes to us from our good friends at fuzzygalore.com. Go visit them!)
Cheshire, Connecticut is a lovely little community two towns north of New Haven with nice homes, well-maintained businesses, and a lot going for it. It's also the friendly neighbor of my hometown, Hamden. So imagine my surprise when I found out there's been a Muffler Man residing there since the 1980s. Who knew? We just had to check it out on our last visit to Mom's house. It sits in front of a business called House of Doors and it's in spectacular condition. This wasn't always the case, however. For some time, just his legs were perched on the concrete block on the front lawn. Fans feared for his future, but the good folks who owned him were giving him some tender loving care, and now he stands proudly to greet the throngs of door shoppers looking for the largest selection of doors in the USA if you believe their sign and we have no reason not to.

There's another funny story attached to this site. Cheshire, being the quaint, tasteful, moneyed New England community that it is, has an ordinance that prevents no sign from being more than seven feet high. According to roadsideamerica.com, when the lumber business that is now the House of Doors put a 26-foot-tall Paul Bunyan muffler man on their front lawn in the early 1980s the town was up in arms, so the Sirois brothers who own the business replaced the axe with an American flag. "You can build a flagpole as high as you want and the town can't do anything about it," they told us. The muffler man, they proudly claim, is now "an official landmark."

No flag was present when we viewed him a couple of weeks ago, so either the House of Doors is brazenly flaunting the law or Cheshire has lightened up and learned to love this outstanding specimen of Muffler Manhood. It seems peculiar, though, that he is in much better condition than the dilapidated house he stands watch over.
Posted by Gunnar and Sherry at 12:02 PM