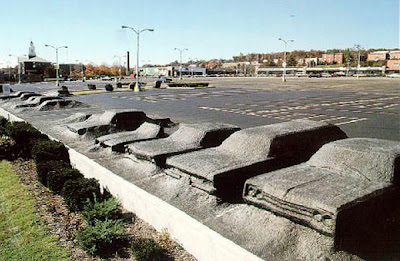 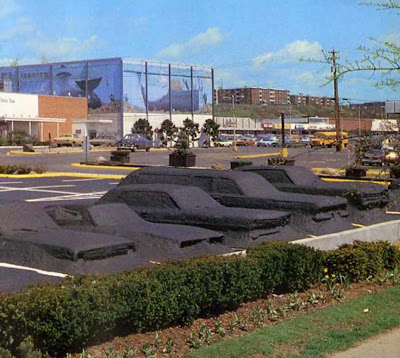 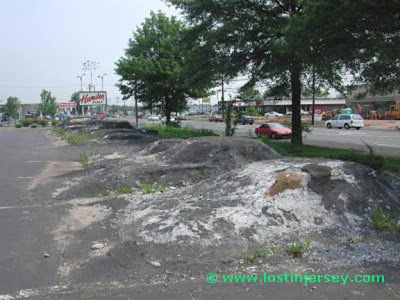 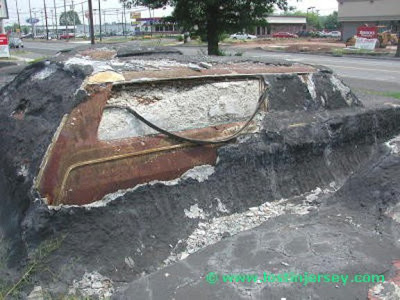 Road to ruin: the latter day GPL. These photos come from the cool blog The Lostinjersey Blog. Check it out!
Regrets, I've had a few. Eccentric roadside attraction-wise, one of the biggest would be to have lived in the host town of one of the coolest, wackiest roadside attractions ever and to have NEVER taken a picture of it.

My hometown of Hamden, Connecticut is a pleasant and innocuous suburb of New Haven. In the '70s, a Mr. David Bermant, the owner of the Hamden Plaza shopping center on busy Dixwell Avenue, wanted to do something unusual to draw attention to his tenants' stores. A self-described art lover, he commissioned New York sculptor and architect James Wines and his firm SITE to create a conceptual public art masterpiece that would entail partially burying 20 old cars in the Plaza parking lot, filling them with concrete and covering them with asphalt. The finished work, referred to as the Ghost Parking Lot, resembled dead cars rising from the grave and the public reaction was decidedly mixed. Hamdenites aren't unenlightened hicks, but this exhibit would be considered pretty far out even in SoHo. I was in high school when the GPL was installed and it so happened that the school was right next to the exhibit. The Plaza management allowed students to park their cars in that part of the parking lot and I remember, on the occasions I had a car, always trying to park in the spaces between the buried cars because it was such a kooky thing. I remember the joke was if you parked your car illegally on school property, it would be towed, buried and asphalted in the Plaza lot. Why I never took a picture of this delight, I'll never know. I suppose it's like a native New Yorker never going to the Statue of Liberty...you don't appreciate what's in your own back yard. Over the next twenty years, the GPL was left to deteriorate, with remnants of the car carcasses poking out through the asphalt. This, to me, only added to the aesthetic awesomeness...the dead cars were like rotting corpses in front of J.C. Penny's, Hallock's and Lafayette Stereo. By 2003, the Plaza was under new management and the dead cars had to go, not just to remove a perceived eyesore, but also because they actually needed the parking spaces for shoppers, of all things, leaving me with only my memories and whatever the Internet has to offer in the way of visuals.

Check out this cool vintage 1978 video. Skip ahead to :36 to see the GPL part. It says it's New Haven, but trust me, it's really Hamden.

Posted by Gunnar and Sherry at 4:20 PM

Awww, I would have loved to have seen that! That's a great vintage vid at the end.

Too funny about your chosen parking space :)

I know what you mean about taking stuff in your own backyard for granted- maybe I'll get out and photograph some of the stuff in mine this weekend!

Wow! Those ghost cars were awesome. I got a few videos deep on the youtube link you supplied. That company did a handful of buildings for the Best franchise stores, it seems. In the western US, we have a store called Fry's Electronics that does something similar, each one has a different theme like UFO's, Alice in Wonderland, etc... Its pretty cool! Thanks for the link, I got my fill of vintage wtf for the day!

Unfortunately your statement that in 2003 there was new management is actually not correct. The family to this day manages the shopping center. The owner David Bermant died in 2000. He would never have wanted to lose the cars (or the art). Supposedly there was not enough money to maintain the cars to the quality that the City of Hamden wanted so instead of spending the money to refurbish the lot, the family ultimately decided to remove the ART.

Thanks for the update, Annoymous. Did the City of hamden give the management an ultimatum about fixing them up?

That does seem pretty surreal, but it's nice. That image of cars is pretty fascinating. It's like a very unique tombstone. It's a shame that the cars had to be removed due to a lack of space.

Wow. Thanks for this. As a former Hamdenite myself, I remember this ghost parking lot! My brother and I used to run and jump from car to car. I searched for it on a whim and found this. It made my night

I remember too. I lived in New haven shopped and worked un the plaza good memories

As a teen my friends and I used to hang out here.

I was going to Paier School Of Art at the time, and it was a source of great amusement and interest!

When I was a kid we went there and those cars caused me literally a few sleepless nights. A friend’s mom had suggested to me that they were there to show the public what the effects of an atom bomb would be. I went to bed that night afraid that an atom bomb would be dropped while I slept! Ugh yup. But sad to see they are gone. I wanted to show my kids ha