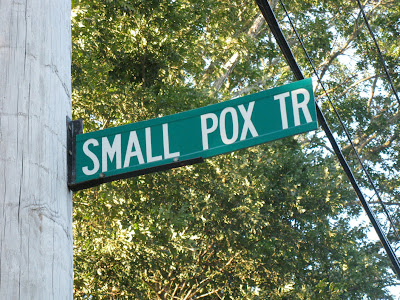 Smallpox is a contagious, disfiguring and often deadly disease that has affected humans for thousands of years. Symptoms usually occur about 12 - 14 days after infection of the virus. They may include: backache, delirium, diarrhea, excessive bleeding, fatigue, high fever, malaise, raised pink rash -- turns into sores that become crusty on day 8 or 9, severe headache, and vomiting.

Oh, and it's also the name of the street that runs through a very nice neighborhood in southern Rhode Island.
Posted by Gunnar and Sherry at 8:00 AM

I can't even imagine living on this street. Probably wouldn't get a whole lot of company.