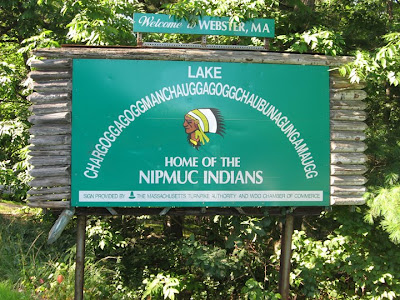 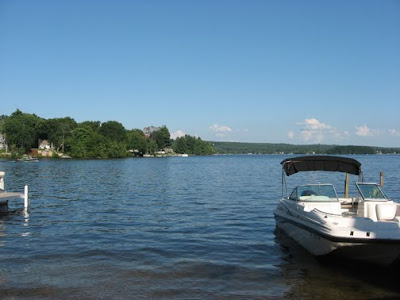 They've got a funny name but it's very pretty there. 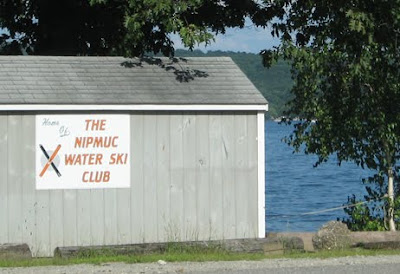 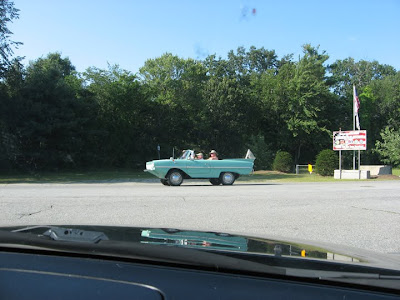 An eccentric lake calls for an eccentric vehicle,
and sure enough we saw this Amphicar go by. 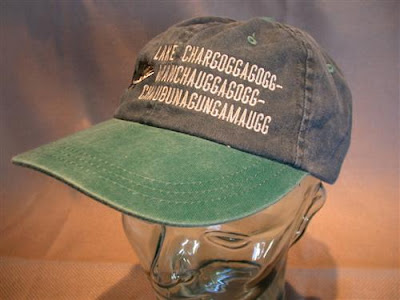 Webster, Massachusetts is a fine community just over the northeastern Connecticut border and they sport one of the best eccentric roadside attractions going. They have a lake with a long name. A really long name. A really, really, really LONG name, as in
Lake Chargoggagoggmanchauggagoggchaubunagungamaugg.
It's the longest place name in the United States and 6th longest in the world. The name comes from the native Nipmuc Indians and loosely translates to "Fishing Place at the Boundaries -- Neutral Meeting Grounds". I get the feeling that the Nipmucs had a Chief Shecky who thought it would be funny to remove all the spaces between the words when he told the white guys what the name of his lake was. "We may get pushed off this land but you'll be stuck with a body of water that goes by an unpronounceable name with 45 letters. Jokes's on you, paleface!" CBS News' eccentric people and places reporter Steve Hartman (I want his job) did a fun piece about this place. Check it out:

Now there is a tongue twister as though I have ever seen one...

Bet you can't say that five times fast...(I can't even say it once)

OK, it has a cool name - but who can say it? For cool lake names, I prefer Oxoboxo Lake in CT. It's the only lake in the world spelled the same forward and backward.

Random: It's easy, it's prounounced the way it's spelled!

Bill: Ha! That's great. Where in Connecticut is it? This gives me an idea... an all-palidrome roadtrip...

Although most of your trips are SOLOS, you could take former New England Patriot John HANNAH along. You could go by KAYAK,or take a RACECAR, if the ROTOR has been fixed on his brakes.... However, HANNAH may not want to go - even though he has many impressive STATS from his playing days, and he was DEIFIED by local fans, he does have a bad ROTATOR cuff...... Such a trip may not be on his RADAR...... Remeber - LIVE NOT ON EVIL......

Bill: I'm dyin' laughing here! All I can say is WOW!