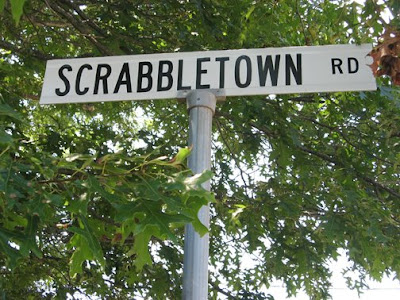 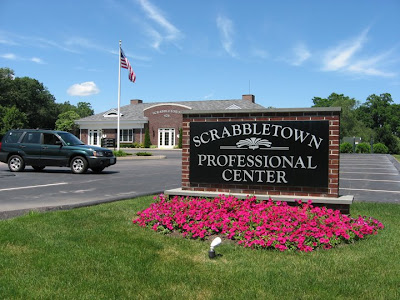 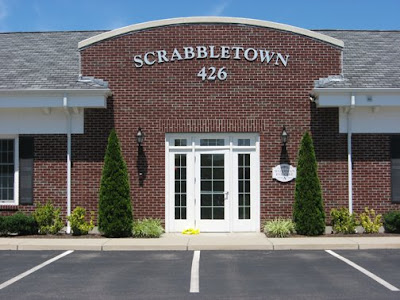 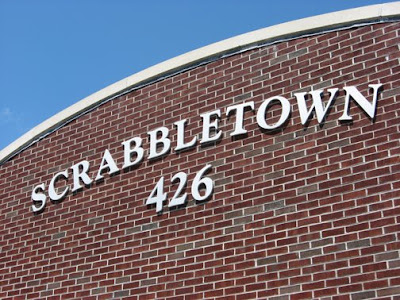 If you're in the right frame of mind, you can't help but see eccentric roadside attractions everywhere you go. This was the case for me and a site just a few miles from our house. There's a road in North Kingstown, Rhode Island I always thought was humorously peculiar: Scrabbletown Road. What a name. Kind of hard to put on airs when your castle is on a street that makes you think of either extremely hard times or a place where the word "jezebel" earns you 75 points.

There really was a village called Scrabbletown back in the early 1800s. Here's some highlights of what historian G. Timothy Cranston has to say about it in a piece "The View from Swamptown":

The story goes that sometime in the early 1800's "Old Man Mawney", one of the elder statesmen of the area, upon realizing that the little cluster of homes centered around a grist mill on a tributary of the Hunt's River was significant enough to warrant a name, decided, after consulting with a jug of rum, that "Scrabbletown" was just about perfect as all the people living there had to scrabble to make a living. His ruminations were obviously held in high esteem as the name stuck and is still used to this day.

(A grist mill was built in the 1820s and Scrabbletown was a mill village until the mill ceased to operate around the early 1900s.)

As is usually the case with a small village such as this, the end of the mill meant the end of the village, and with the closing of the Scrabbletown schoolhouse around 1920, the village, which at its peak consisted of a school, a tavern, a Baptist meetinghouse, the gristmill, and twelve to fifteen houses and farms, for all intents and purposes, ceased to exist.

Scrabbletown was largely forgotten and stayed out of the limelight for some fifty years, until 1976 when it was nominated as an archetype for the area's rural past to the National Register of Historic Places.

There's a very nice new office park on Scrabbletown Road and instead of using a corporately bland name like North Kingstown Commons or Pinnacle Point Estates, they went with the proudly earthy Scrabbletown Professional Center. Kudos for sticking to your roots, Scrabbletown businesses. I would gladly patronize anyone who calls Scrabbletown home.
Posted by Gunnar and Sherry at 2:49 PM

That's awesome...I never knew this place existed....it would be even better if they had some sort of scrabble related attractions....

Am at Gregg's restaurant in scrabbletown ri. Home of Pres. Obama's favorite "death by chocolate " cake.