Hooray for Olliewood: The Laurel and Hardy steps of Los Angeles, California 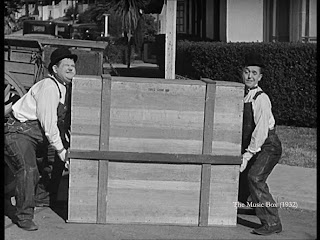 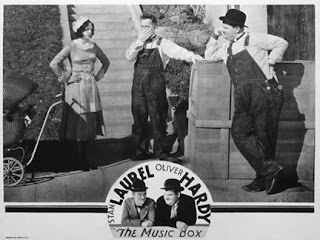 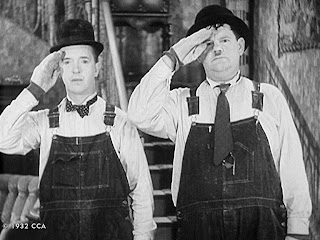 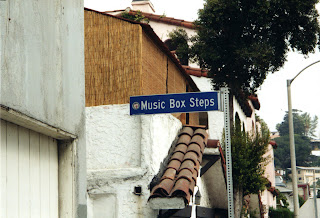 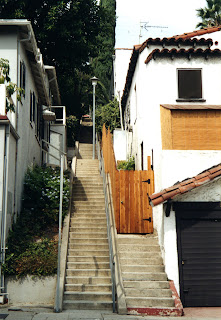 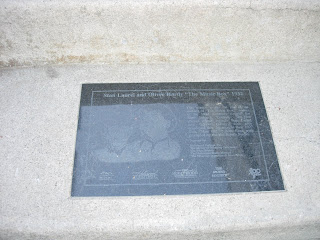 This photo comes from the swell blog Dear Old Hollywood. Check it out!

It was movie studio head Hal Roach's idea to team up a skinny dimwitted guy with a heavy pompous dope in the 1920s. Little did he know they would become the world's most famous comedy duo, Laurel and Hardy. Probably their most famous movie, a short actually, is "The Music Box", better known as the one with the piano and all the steps. It won the first Oscar given for Live Action Short Film, back in 1932. In it, Stan and Ollie are two nincompoops commissioned to deliver a piano to an address at the top of a very, very, very long outdoor staircase. About a half an hour of slapstick hilarity ensues, with the boys leaving everything in shambles, and I still laugh every time I see it. Laurel and Hardy used a real outdoor location at 923-935 Vendome Street near  Del Monte Street in the Silverlake district of Los Angeles and the steps are still there today and open to the public. It's a lot different today --with houses, trees, shrubs -- compared to the barren look it had back in the thirties. There's a marker and a plaque, and a park nearby named in Stan and Ollie's honor. The steps get visited often, most notably by the Sons of the Desert Laurel and Hardy fan club, but I'm not sure anyone has attempted to carry a piano up to the top. That would be another fine mess, wouldn't it?

(We also visited Harlem, Georgia,Oliver Hardy's birthplace. Check it out here).
Posted by Gunnar and Sherry at 10:48 AM

Hello,
A quick introduction from my end-Iam Chinmaya from Bangalore,India. The reason for my mail is that I understand that the "Sons of the Desert" are having their next convention at Hollywood later this year and would want to know if you are attending it. You may check this for more details- http://www.laurelandhardywood.com/ .

Incase you or anyone whom you know are,please let me know as there are somethings that i want to discuss regarding transport and accommodation.My id is chimayaprakash@gmail.com Else,you may ignore this.