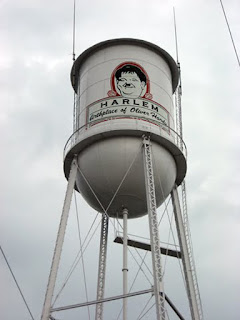 They're proud of Ollie in Harlem. 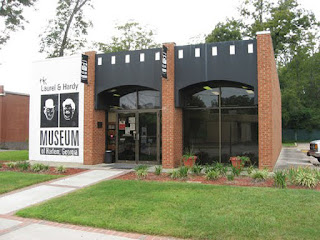 They've got a nice little Laurel and Hardy Museum there. 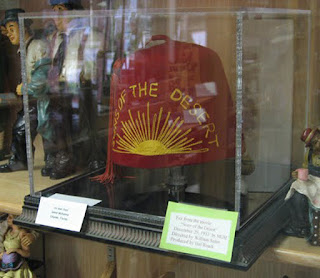 They've got Ollie's fez from the classic Sons of the Desert... 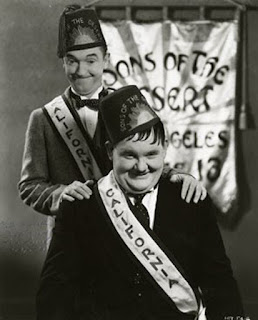 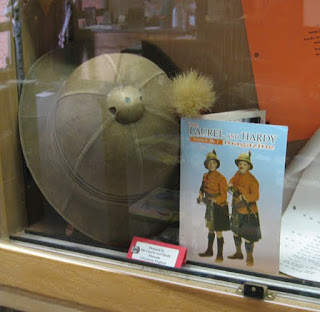 ...and a pith helmet he wore in Bonnie Scotland. 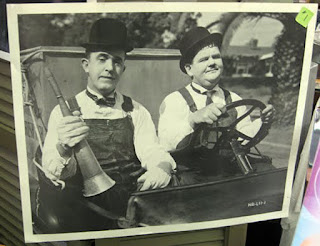 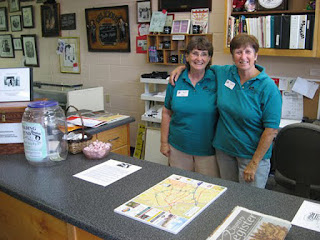 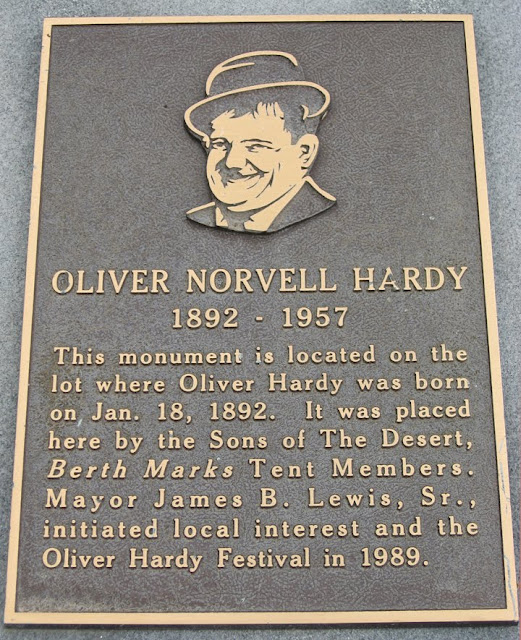 The house where Ollie was born is no longer standing... 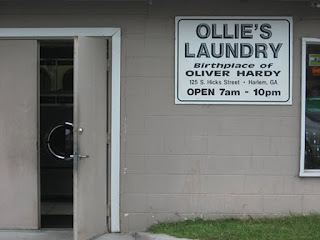 ...but there's a nice laundromat there named in his honor. 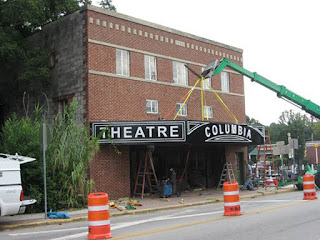 They've been sprucing up the town theater for the upcoming Oliver Hardy festival. 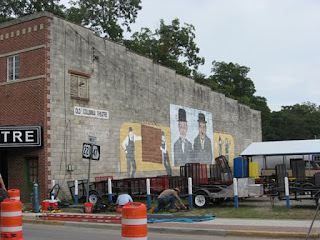 Check out those murals on the side.
Oliver Hardy was the rotund half of Laurel and Hardy, one of the most beloved comedy teams of all time. He was born in the little eastern Georgia town of Harlem, not far from Augusta, and they want you to know about it. They've got his picture on the water tower, a laudromat named after him on the site of his birth address, murals of him and Stan on the side of the movie theater, and best of all, a little gem of a Laurel and Hardy museum in the center of town. In it you'll find lots of figurines, photos, posters, scripts, and other Stan-and-Ollie-abilia, all under the watchful eye of two of the nicest Southern museum hostesses you'll ever meet, Linda and Nancy. They will play Laurel and Hardy movies and shorts for you in the screening room, too. My personal favorite is "The Music Box," where our two heroes have to deliver a piano up a very long set of steps. Ollie's pain in this film is exquisitely funny. Those very steps are still standing in Hollywood and we were lucky enough to see them on one of our recent trips there. Harlem's biggest event of the whole year is just a few days away. Every year since 1988, they've held an Oliver Hardy Festival on Main Street, with a parade, 350 craft booths, a barbecue, film showings, and look-alike contests. Harlem's population of about 1800 swelled to 35,000 hearty Hardy partiers in 2008 and this year's event is this Saturday, October 3. On Friday night Harlem hosts the Sons of the Desert reception, in honor of the L&H fanclub members that go by that name that will be coming in from all over the world. So if you're in the area, check it out. There's no place like Harlem for the Ollie-days.
Posted by Gunnar and Sherry at 9:29 AM

Not what I would expect to find in Georgia!

Wow, interesting post, maybe something another Ollie such as myself should visit :D

Thanks for stopping by, Ollie. Maybe they'll give you the key to the city!

What a weird place! Thanks for the info. I'm headed there for the Oliver Hardy Festival tomorrow!