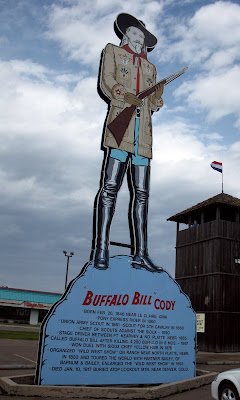 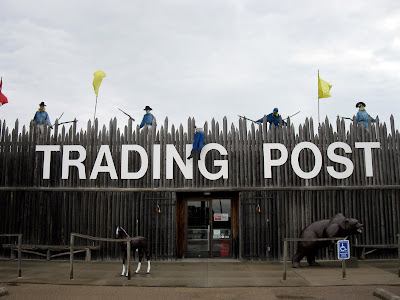 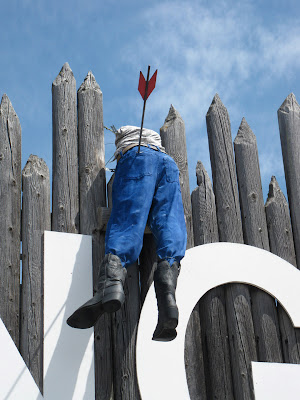 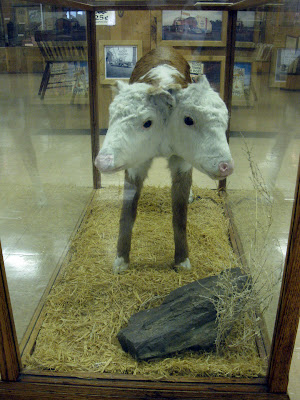 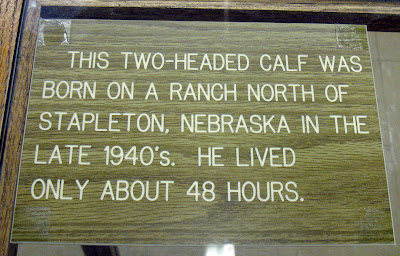 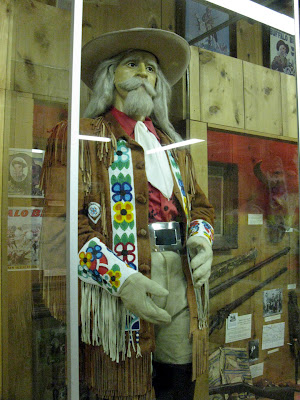 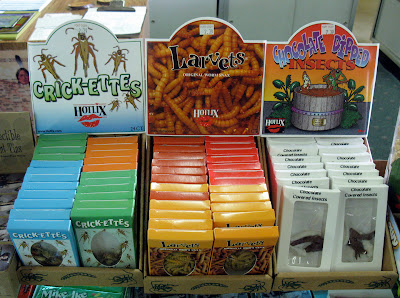 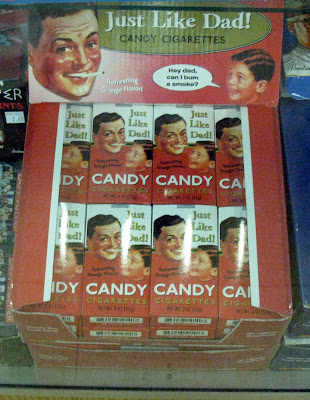 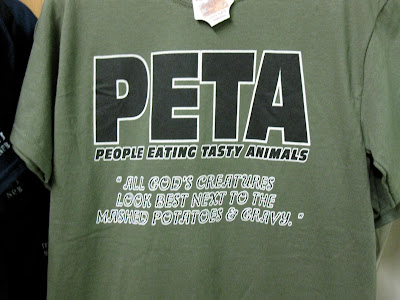 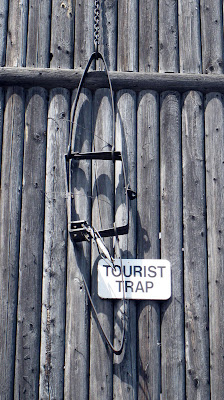 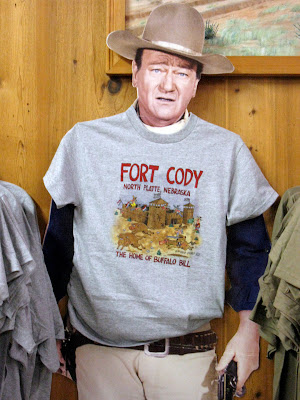 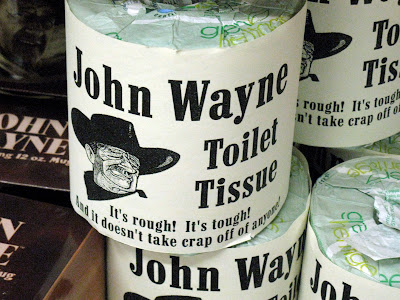 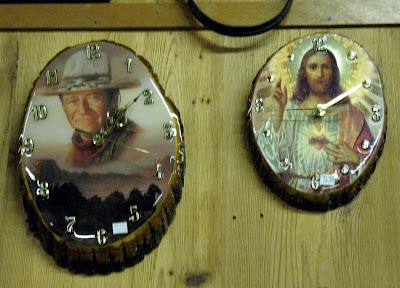 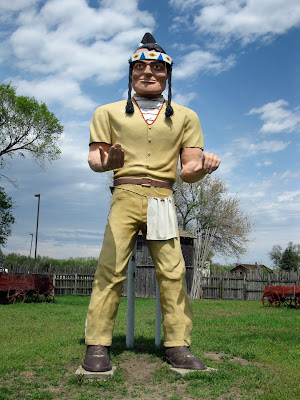 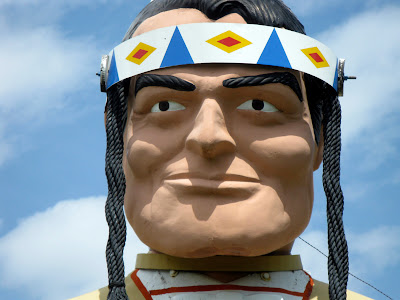 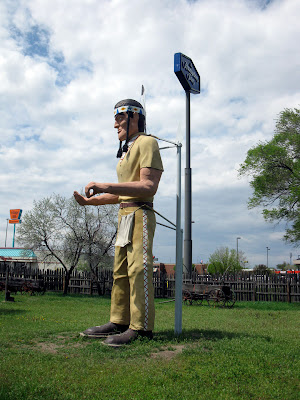 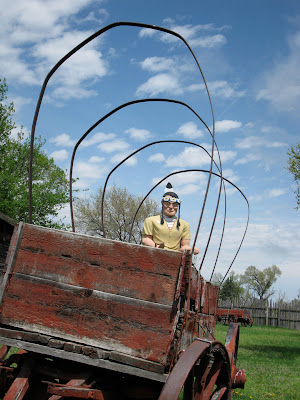 Nothing warms the heart of a bored cross-country roadtrip passenger than a good, old-fashioned politically incorrect tourist trap. Such is the case of the Fort Cody Trading Post, just off Interstate 80 in North Platte, Nebraska. North Platte has a genuine claim to fame, as it was the 1880s home of William F. "Buffalo Bill" Cody. Not exactly the stay home and collect stamps-type, he got his nickname for killing 4,280 buffalo in an 8-month period during 1867-68. There are lots of good reasons to stop and stretch your legs here: the "fort" is actually a western museum/wild-west-show-in-miniature/kitschy gift shop all housed in a mock stockade (mockade?) complete with soldier mannequins (one with an arrow tastefully stuck in his butt) and a corral out back that is home to a...drumroll, please...Muffler Man Indian! The western museum displays many authentic items, including chaps, guns, boots, spurs, stuffed animals, and some statues of Bill and various Indians. The piece de resistance, though, is a stuffed two-headed calf. The miniature west show is an accurate, if not tiny, diorama of Buffalo Bill's traveling extravaganza from the 1870s. Ernie and Virginia Palmquist carved the 20,000 figures --snake charmers, knife-throwers, fat ladies, cowpunchers, squaws, you name it -- that come to life every half hour in an animated show, free of charge. The gift shop features a glittering array of items to mark the occasion and remember your friends and loved ones by: iron dinner triangles ("Come an' gitit!"), books of western lore, taste-challenged T-shirts, edible bugs, stuffed jackalopes, candy cigarettes and more John Wayne paraphernalia than you can shake a stick at, Pilgrim. And if that's not enough, out back there's a corral with wagons, a tee pee, a buffalo and, yes, the famed 25-foot lantern-jawed brave, girning at you with Native American Muffler Man pride. Muffler Man aficionados will tell you this is a modified classic MM, not the official Indian classification, just so you know. However you categorize him he's awesome, and how.

So don't pass up the chance to see a real kitschy Americana treat the next time you're passing through central Nebraska. And the skies are not cloudy all day.
Posted by Gunnar and Sherry at 6:29 PM

LMAO at the John Wayne tp! I love it. I wish I had known about this place when we visited Nebraska last year. Any excuse for a road trip, and this is a dang good one.

Thank you so much for your blog post about Fort Cody Trading Post in North Platte! I always appreciate when someone shares the love of Nebraska with the world! Come back again soon!

This place has it all! It would be a veritable oasis to come across this on a long road trip! I love the "Just like Dad" candy cigs and the indian is fantastic! He looks like he needs an axe or something to hold since he is sans muffler :-)

The Little Big Man Muffler Man! Dustin Hoffman would be so proud.

Great photos! Fort Cody really is the ultimate tourist trap and so much fun to visit. I was just there in October and got some awesome video of the Buffalo Bill Miniature Wild West show! My favorite part though has to be the 2 headed cow. He/they are so cute. Here's my review and blog with video if you'd like to see it!
http://www.freewheelintravel.org/disability-travel-blog/road-trips/fort-cody-trading-post-north-platte-nebraska/

Thanks for your nice comment, Karin. I checked out your blog and it's great! Makes me want to hit the road! I tried to leave a comment on your blog but got stymied with a "check the box to prove you're not spam" notice. Couldn't find the box. Maybe my comment will show up four times tomorrow! Anyway, thanks for stopping by and happy trails!