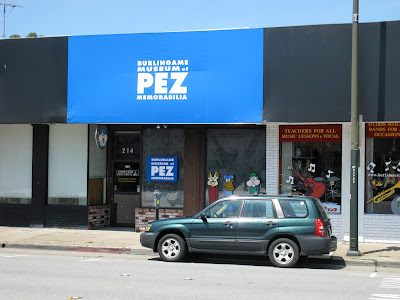 You wouldn't think such as unassuming storefront would house such an awesome collection. 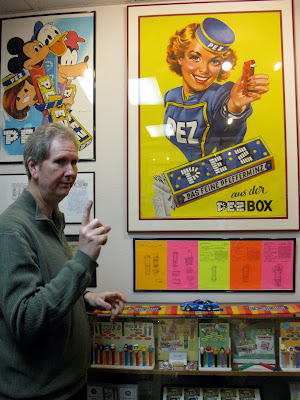 Our Master of Ceremonies Gary Doss tells us about the Germanic origins of Pez. 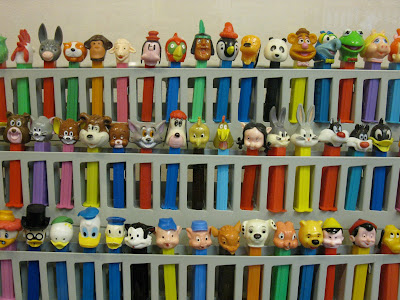 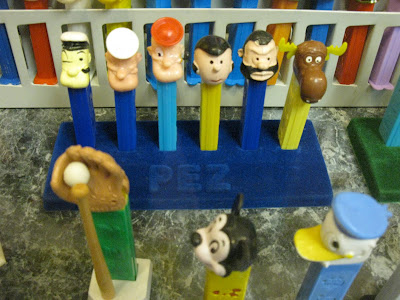 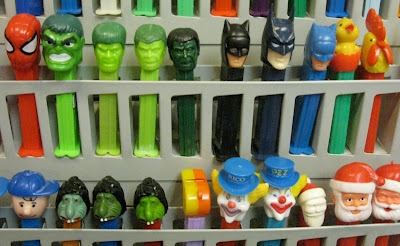 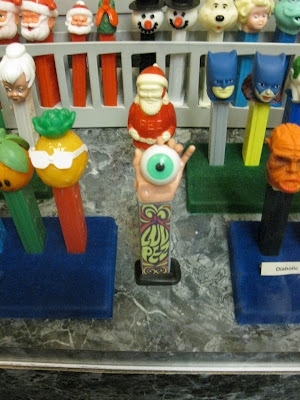 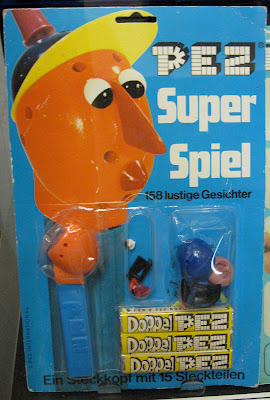 This is their rarest Pez dispenser: a German model that was a choking hazard. Fun! 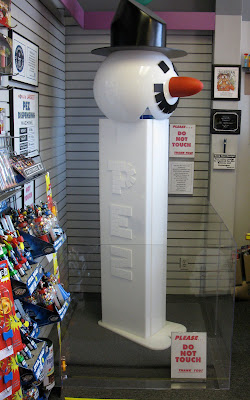 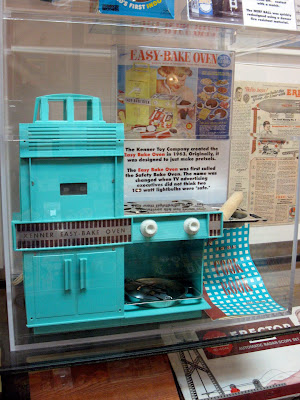 In addition to Pez, there's a classic toy collection including this Easy Bake oven... 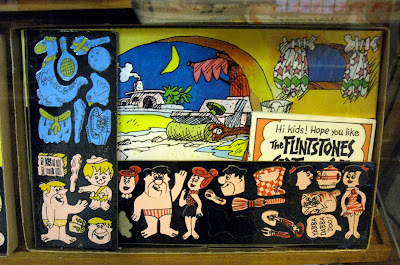 ...and some vintage Colorforms, in case you ever wondered what Fred and Barney looked like in their underpants. 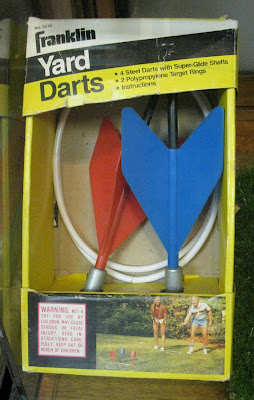 And just for fun, there are some banned toys including these ferocious-looking lawn darts... 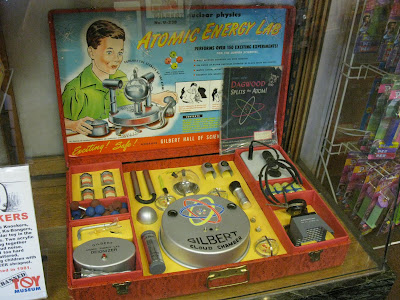 ...and an Atomic Energy Lab with real radioactive material.
Pez, the sweet candy bricks known for their lovable cartoon-characters-with-decapitated-heads dispensers, has been around since 1927. Eduard Haas, an Austrian candy man, created Pez and took its name from an abbreviation of "pfeffermenz", the German word for peppermint. The first Pez dispenser appeared around 1950. Pez has a wildly devoted group of followers, probably none more so that Gary and Nancy Doss, founders of the Burlingame Museum of Pez Memorabilia, located in a strip mall a little south of San Francisco, California. They boast they are the only place in the world where you can see every Pez dispenser ever made – no small feat since over 600 of them have been produced since 1950. From Spongebob to Barney Rubble to the Creature from the Black Lagoon, if Pez made it, the Dosses display it. Betsy Ross and Mozart are in there too, next to Papa Smurf, Wile E. Coyote and Darth Vader. Probably the rarest item in their collection is the Make-A-Face dispenser. It's similar to a Mr. Potato Head, but was considered a choking hazard and was recalled after only six months on the market. Only 10 are in circulation and each can fetch up to $5000. There's also a wealth of other Pez-abilia, including vintage posters, ads, signs, toys and other tie-ins. But the pride and joy here is the 7-foot 10-inch snowman Pez dispenser, recognized by the Guinness Book as the world's largest Pez dispensing machine. We got a wonderful museum tour from the very contagiously enthusiastic Gary. He had a computer business 15 years ago and when the Pez dispensers he displayed around his shop gained more attention than the computers, he went in the Pez business full time (he sells Pez dispensers internationally, in addition to displaying his collection).

And as if that weren't enough, the Dosses also have a classic toy collection including Colorforms, Play Doh, Viewmasters, Erector Sets and other delights from Baby Boomers' childhoods. Even more intriguing is the Banned Toy Museum featuring items pulled off the market for safety reasons or because they were deemed offensive. Here you'll find the Matador Barbie, offensive to animal rights groups; a cap pistol belt buckle, which could accidentally go off causing serious burns; lawn darts (do you really need an explanation why these were recalled?); and the Atomic Energy Laboratory, containing real radioactive material.

So the next time you're in Silicon Valley, remember: All we are saying is give Pez a chance.
Posted by Gunnar and Sherry at 1:52 PM

Great post!! Did you see Elvis Pezley? I heard there was one made.

Hey Denise: I thought of you the whole time we were here. Just like one of your collectors. Elvis Pezley! HA! I'm sure he was in there somewhere...I got overwhelmed with it all.

Rick: Thanks! That place was fit for a pez-ident!

Thanks, lo-tech. I guess we like the same "type" of thing!

I guess I had never thought of how Fred and Barney appeared in their unmentionables, but thanks to you now I know! I love the fact that these ordinary folks opened up a museum to showcase the hobby they love! Thanks for showing it to us!

problems with drying can occur suddenly. therefore, that this does not happen, you do not need to pull until you need dryer repair burlingame, but you should call the mater for a preventive examination. https://euappliancerepair.com/cities/burlingame/