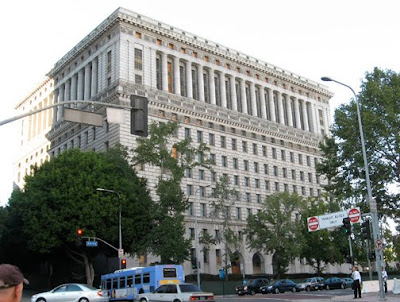 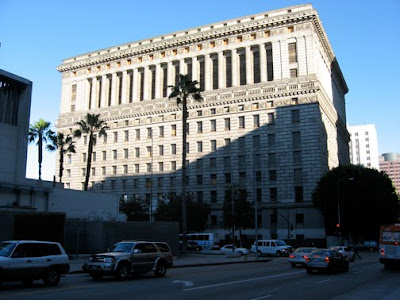 L.A.'s Hall of Justice, where Perry could always get a parking space on the street right in front. 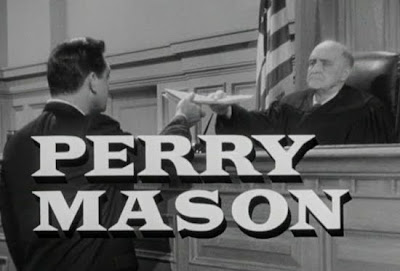 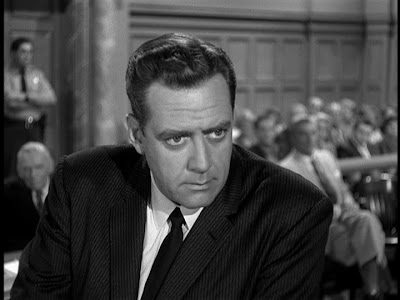 Raymond Burr in the role he was born to play. 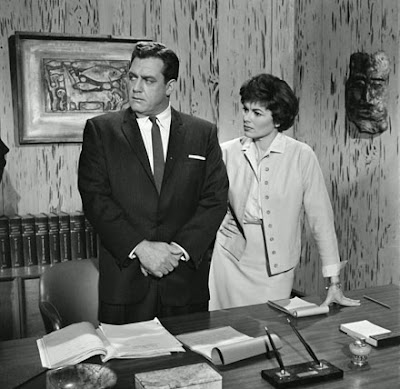 Barbara Hale as Della Street, the best gal Friday in the business. And dig that crazy office decor! 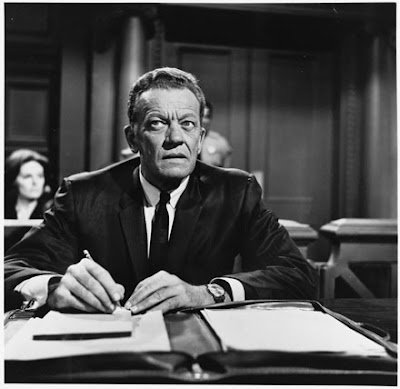 The great William Talman as Hamilton Burger, TV's losingest DA, but a man with great integrity deep down. 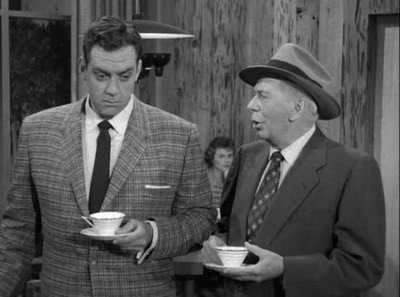 Los Angeles is the main location of the great 1957-66 TV series "Perry Mason." The old L.A. Hall of Justice is an establishing shot in most of the episodes and that building still stands in L.A. and looks just as it did in the TV show, only without the 1950s cars driving past it. It's had some notorious "guests" in its day including Charles Manson and Sirhan Sirhan but it's been unused since an earthquake damaged it in 1994. A restoration effort has been underway for many years.

"Perry Mason" turned 52 this year and it's, without a doubt, the best show in the history of television. Here's why:

Perry is cool. He's never nervous, always knows what to do and is neatly groomed. Ordinary people are always asking him, "Aren't you Perry Mason, the famous lawyer?" He works night and day for his clients, sometimes for free. And he's never wrong.

Della Street is smart. And attractive. And good at pretending to be someone else sometimes. She stays at the office just as late as Perry and never complains. You never really know if she and Perry are an item, and I've never known anyone whose last name is a synonym for pavement.

Paul Drake is REALLY cool. A big, barrel-chested P.I. with prematurely silver hair in a checkered sportcoat smoking a Winston and driving a T-Bird. He's got his own private back entrance to Perry's office, always sits on the edge of Perry's desk and greets Della with an ever so suave "Hiya, beautiful" (she usually just rolls her eyes back at him).

Hamilton Burger. William Talman is brilliant as the eternally crabby D.A. who always loses but isn't really a bad guy. His best bit: Slowly shaking his head "no" in disbelief while rising from his table in court and bellowing out a long, scratchy, irritable, "Your Honor!"

Lieutenant Tragg. Another grouch who's always positive he's got Perry beat this time. He usually shows up behind a door or from a closet one minute after the stiff is found, charging Perry's client with Murder One, very full of himself.

Gertie. She's Perry's receptionist, usually on the other end of Perry's or Della's phone ("Yes, Gertie"). She actually shows up on camera once or twice and is a real lollapalooza.

Nice clean murder. No rape, incest or other unpleasantries. Blackmail's most often the motive and the victim is usually very mean and unpleasant and had it coming to him or her anyway.

Everyone is nasty. Rich or poor, young or old, they all act like their shoes are on too tight.

Terrific character actors. If you watch this show a lot, you'll see the same fabulous repertory company of character actors over and over again. And I don't know the names of any of them.

It holds up in reruns. It's like listening to opera or your favorite Beatles records - you sing along with the best parts. And even if I've seen the show before, I can never remember who the murderer is, anyway.

They never break from the formula. Perry's client never takes the stand, the real murderer confesses, Perry's client is innocent. You can set your watch by it.

It's a period piece. Fabulous cars, great clothes, cool furniture. Will "The Practice" look this cool fifty years from now?

I rest my case.

Posted by Gunnar and Sherry at 5:12 PM

I am so glad you reminded me about Perry Mason- I used to watch that all the time. I always giggled at the fact that Hamilton Burger would've been called "Ham Burger" - and yes, that Della Street was one great gal!

Betty: Yes, "Ham Burger". And they never allude to that joke on the show.

Lets not forget that when he retired, Perry got bored with sitting at home (missing Della???) so he decided to move to San San Francisco,and join the police force. All was well until that shootout that left him in a wheelchair. What rotten luck!! Don't understand why he had to change his name to Ironside - maybe in case he had to hunt down one of his former clients, the evil-doer wouldn't know it was him.

Ironside. They should have called min Ironbottom!

Hahaha! He then went on to become the superhero known as Ironsideman. Robert Downey Jr. is going to play him in the new movie adaptation.

Hello, i am glad to read the whole content of this blog and am very excited and happy to say that the webmaster has done a very good job here to put all the information content and information at one place. Texas

Hello, i am glad to read the whole content of this blog and am very excited and happy to say that the webmaster has done a very good job here to put all the information content and information at one place.
call center

Your article was quite intriguing and the information quite useful. Will check your site often to see other great posts you make! Regards

Did you know that you can create short links with LinkShrink and make money from every click on your short links.