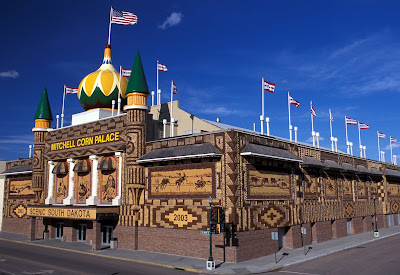 This picture is from travelsd.com, and is a lot nicer than the one I shot when we were there. 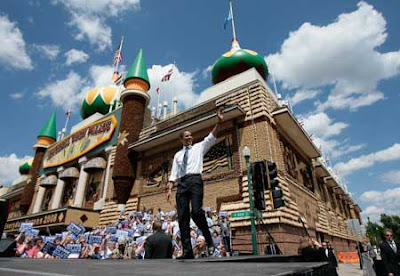 If you're in South Dakota, you have to visit the Corn Palace, as was the case with then-presidential candidate Barack Obama in 2008... 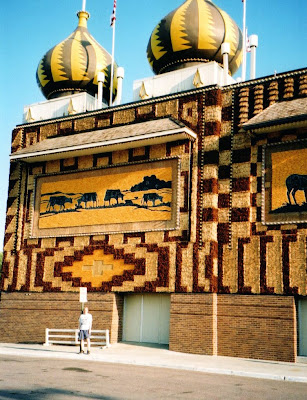 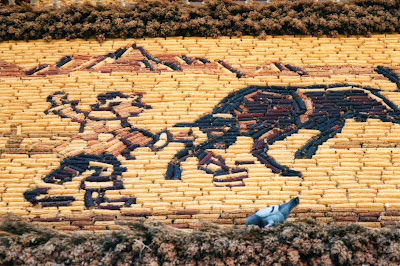 The exterior of the building is decorated with an a-maizing display of corn every year.

Mitchell, South Dakota is just off Interstate 90 and is a small farming community with one of the biggest and best eccentric roadside attractions you could ever ask for: the world's only Corn Palace. It's a multi-purpose arena and is visited by over 500,000 people a year. The architecture is Moorish revival (ironically featuring onion domes) and the exterior murals and decorations are made up of corn kernels, husks and cobs. It dates back to 1907, when Mitchell was in a fierce fight to become the state capital city (it lost to Pierre). As a result, the unusual building was commissioned and has remained ever since. The building hosts a yearly rodeo and polka festival, as well as the home basketball games of the Dakota Wesleyan University Tigers and the fighting Mitchell High School Kernels. The exterior decorations are a stupendous cornucopia for the eyes and boggle the mind because they're redone every year in a different theme by local artists. The interior is also decorated in corn and is a wonderful cobjet d'art. I know it sounds corny, but, aw shucks, this place had me grinning from ear to ear, so ears looking at you, Mitchell.
Posted by Gunnar and Sherry at 1:12 PM

We call it Maize.

Gunnar and Sherry, I will be visiting family for the next couple of weeks. So I would like to take this time to wish you and your family a very Merry Christmas and a Happy New Year. PEACE! ~ Richard.

Bill: Hahaha. Why is it the white man had no problem with "Lake Quonochontaug" but couldn't pronounce the word "maize"?

Richard: Thank you! All the best to you and yours during the holidays, too!

I like your single photo with the comment on crwod control. Very funny! Thanks for sharing your story about the Corn Palace. Hopefully you will be back.

Here's a late-1960s postcard I have of the palace.

Emily: Thanks. I can't wait to visit again soon!

Wanderamble: Awesome! I like how it looks basically the same today. You can't improve on perfection, I guess...

The place looks nice and comfortable I really stayed fascinated with the place but more with the figures, definitely people who make them should be very perfectionist, and imaginative. No anyone have the talent necessary to do it. I hope be there in a few day an live a similar experience as your.