Submitted for your approval: Rod Serling's hometown celebrates the 50th anniversary of "The Twilight Zone" 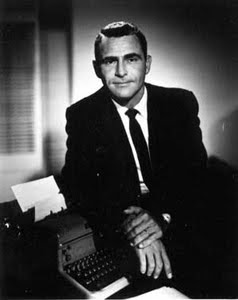 There is a fifth dimension beyond that which is known to man. It is a dimension as vast as space and as timeless as infinity. It is the middle ground between light and shadow, between science and superstition, and it lies between the pit of man's fears and the summit of his knowledge. This is the dimension of imagination. It is an area which we call The Twilight Zone.
— Rod Serling 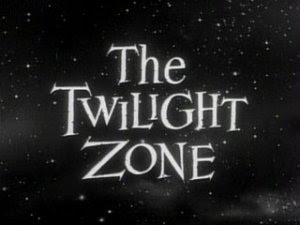 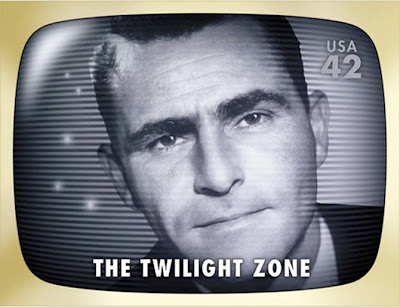 The U.S. Postal Service recently had the good taste to put Rod Serling on a stamp.

SOME OF THE ALL TIME GREAT EPISODES: "A Stop at Willoughby": An advertising executive (James Daly) who has grown exasperated with the stress of the business life longs to get off a train at a stop called Willoughby. "Mad Men" has got nothing on this. "Push, push push!" 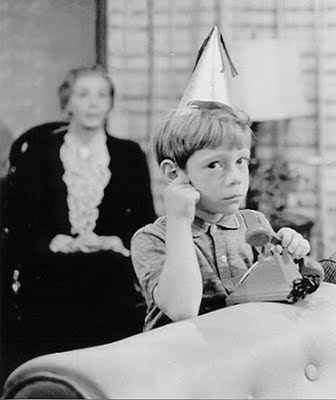 "Long Distance Call": A boy (Billy Mumy) receives phone calls from his recently deceased grandmother on the toy phone she gave him. Danger, Will Robinson! 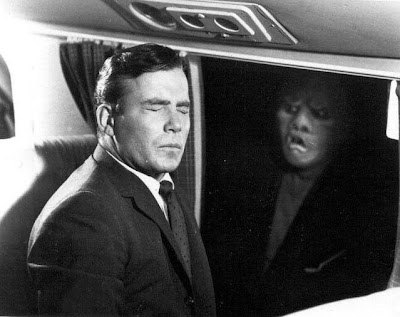 "Nightmare at 20,000 Feet": A man (William Shatner) recovering from a nervous breakdown sees a creature on the wing of the airplane he's on. Beam me up, Scotty! "To Serve Man": An alien race arrives on earth with a promise to help solve mankind's problems. And they'd just love to have you for dinner. 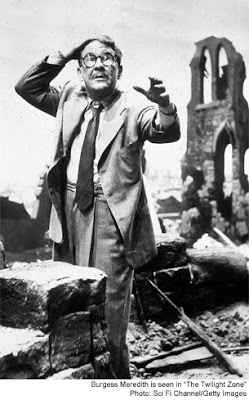 "Time Enough at Last": A man who loves to read (Burgess Meredith) survives a nuclear explosion. One of the best ironic Twilight Zone endings ever. 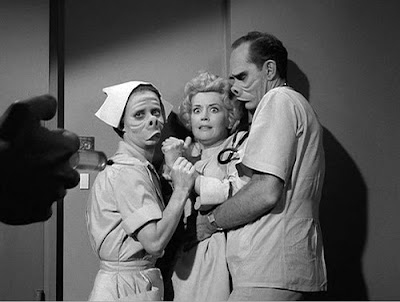 "The Eye of the Beholder": A disfigured woman (Donna Douglas, voice of Maxine Tyler) undergoes plastic surgery in order to look more like everyone else. Elly Mae Clampett's worst nightmare. 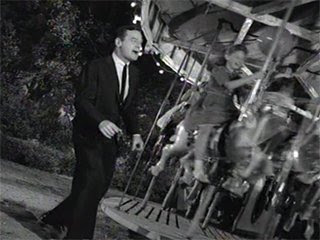 "Walking Distance": While visiting his boyhood hometown, a middle-aged executive (Gig Young) finds himself in the past. The carousel that inspired this episode still stands in Serling's Binghamton, New York hometown. Great score by Bernard Herrmann on this one, too.

(I got some help with the episode descriptions here.)

Fifty years ago, CBS aired a TV series unlike any other before it. That series was "The Twilight Zone" and there hasn't been a TV show quite like it since, either. Its writer and creator, Rod Serling, invented a genre, a catchphrase, an experience. If something unexplainable or otherworldly happens to you, you might say "I feel like I'm in The Twilight Zone" and everyone will know what you mean. In fact, all you need to do is hum the first four notes of the theme song, and people will get your drift. Serling took difficult topics like war, racism and McCarthyism and put them in science fiction morality play context. Intelligent writing, great acting, great directing, and great musical scores were in every episode. But the best part for me was always Serling's introductions and narration. Was there ever a cooler guy? That voice, that demeanor, that cigarette. He actually made the writer the star of the show, something that has never happened since.

Rod Serling was very loyal to his hometown of Binghamton, New York. He named his production company Cayuga after nearby Lake Cayuga and Binghamton was the inspriration for some of his more nostalgic episodes. Now Binghamton is doing Serling proud. The Twilight Zone 50th year celebration is a four-day event that will kick off October 1st at the Holiday Inn – Triple Cities Ballroom in Binghamton. The opening ceremonies will include the Serling family and local dignitaries, proclamations and presentations as well as guest speaker Tony Arabella, who has chronicled the works of Rod Serling in a number of formats and is currently editing a ten volume book series titled As Timeless As Infinity: The Complete Twilight Zone Scripts of Rod Serling. The evening will conclude with a screening of the PBS American Documentary, Submitted for Your Approval: Rod Serling which chronicles Serling’s life and was filmed, in part, in and around Binghamton. They're also unveiling a Serling statue and having a special ceremony in honor of the new Rod Serling U.S. postage stamp. Click here for all the details.

Willoughby? Maybe it's wishful thinking nestled in a hidden part of a man's mind, or maybe it's the last stop in the vast design of things, or perhaps, for a man like Mr. Gart Williams, who climbed on a world that went by too fast, it's a place around the bend where he could jump off. Willoughby? Whatever it is, it comes with sunlight and serenity, and is a part of the Twilight Zone.
Posted by Gunnar and Sherry at 1:56 PM

I Love "The Zone".... Remember the episode where William Shatner played the guy who's wife drowned in the backyard pool? He's on the hone wailing "My poor wife is at the bottom of the pool!!!!" The voice on the phone asks "Well, did you take her out of the water?" And he replies "NOOOOOOOO!!!" A Classic.

Oh, wait a minute.
That was real.
Never mind.

HA! Here's a bizarre but true factoid. Andy Smith is from the same town as Rod and his parents used to socialize with the Serlings! Must have been interesting having dinner at the Serling house... clocks running backwards, dolls saying "I'm going to kill you", dead people calling on the telephone...