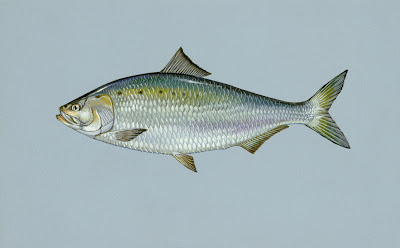 The mighty shad, pride of Connecticut 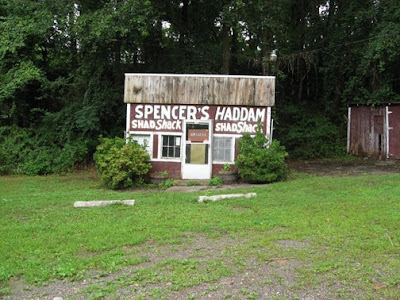 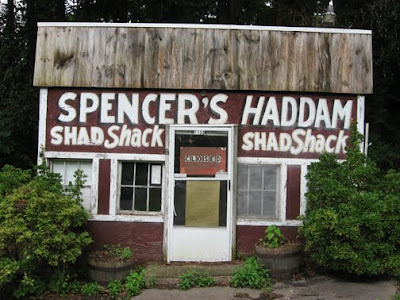 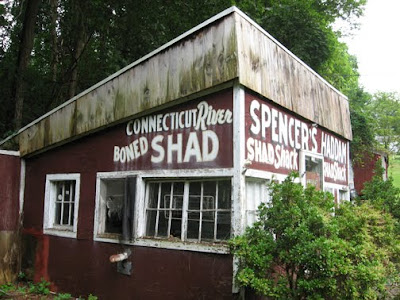 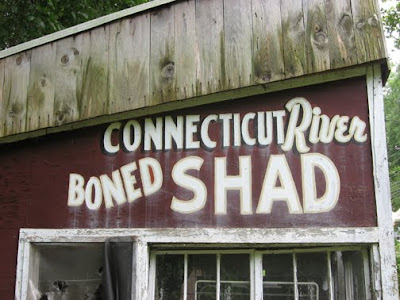 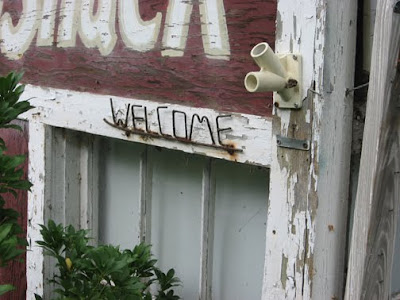 Haddam, Connecticut is a beautiful small town along the eastern side of the Connecticut River. On Route 154, just up the road from the area's landmark Goodspeed Opera House, sits a curious dwelling amid all the finely kept wooded yards and expensive upper class homes: a dilapidated hut with "Spencer's Haddam Shad Shack" painted in big letters on three sides of it. According to the Haddam Historical Society's website, Spencer's has been a local landmark since 1930, and is open on a seasonal basis when the shad are running. Shad have played an important role in the community's history and Spencer's is Connecticut's only remaining Shad Shack.

Apparently shad are a big deal in Connecticut (although I grew up in the state and never knew it). A quick Google search shows tons of websites devoted to it, the largest of the herring family and a favorite Connecticut River sportfish. It's the state fish of Connecticut and Haddam even has a shad museum.

Which brings us back to our sad little shack in Haddam. In certain communities along the Connecticut River, the spring run of shad are cause for celebration. It was a staple and savior of the Connecticut colonists and at one time there were lots of shad shacks. Could Connecticut's last shad shack be sleeping with the fishes? It doesn't look too promising, but who knows... Connecticut Yankees are a feisty bunch and not ones to part with their shad traditions lightly. If Haddam's shad shack is shuttered, it could be a shattering experience. Sha-doobee.
Posted by Gunnar and Sherry at 3:33 PM

aw, that is a sad sack of a shad shack! Say that ten times fast :-)

Hello Gunnar and Sherry,
I just found your blog today while searching for info on Utah. What a neat blog. We also keep a travel blog: http://travelingdancers.blogspot.com/
I noticed the counter on your site. When I tried to obtain one, I can't figure out where to paste the code to get it to work on our blog. Can you help? :) Thanks Anita

I have eaten shad from Spencer's since I was old enough to eat solid food. I have photos of me about a year and a half old beside by Uncle George's 1949 Packard in front of Spencer's. In those days a half dozen women in bloodied white aprons sat at a shelf that ran inside on each side of the central door. Each of them had a pair of buckets and a pair of deep trays. They also had sharp filleting knives. The women would take a whole shad from one bucket, the knives would flash expertly and - voila! - a pair of fillets would appear in one of the trays and occasionally a pair of roe would appear in the other tray. As a boy those women seemed fearsome. If a boy got too close to the bucket, I feared, I might be filleted before anyone noticed I wasn't a fish. All those women are long gone now. The last time I was there the daughter of one of them and her husband opened the Shad Shack during the shad run but the fish they sold - fresh and smoked fillets and pairs of roe - came from some other source. Still nothing speaks quite so eloquently speaks of spring as baked stuffed shad fillet with either fiddleheads or asparagus in Hollandaise Sauce or a pair of roe dredged in flour with a bit of salt and pepper then gently fried in butter. Add a lemon wedge or two and you have a meal that's no less than sublime.
My father recalled fishing for shad in the Connecticut River without bait. All he needed was a shiny spinner and the hungry fish then running thick toward spawning grounds would snap at it and become a meal.
The Algonquian story tells of a little porcupine who could never make friends because his spines ruined every friendship he tried to form with other woodland creatures. The poor, lonely porcupone prayed incessantly to the Great Spirit asking for help with his plight and bemoaning his lot. The porcupine prayed so often and so annoyingly that the Great Spirit became angry. He reached down, picked up the porcupine and turned him inside out then threw him into the Connecticut River where that porcupine became the first shad. That story accounts for the many fine bones in the shad.
In the centuries until the middle of the 20th when shad runs began to dramatically diminish shad was a staple food. Planked shad was a great favorite of the poet Walt Whitman. No less an authority than Cole Porter included a reference to the fish in his song Let's Do It:
Electric eels, I might add, do it,
Though it shocks them, I know.
Why ask if shad do it?
Waiter, bring me shad roe!
I now live in Washington state where shad is known but not as a food fish. Salmon out here is king (and cohoe, etc.) but as the forsythia brightens the landscape, crabapples, dogwood and magnolias bloom above the crocuses and daffodils, I wish I were making the beautiful drive south along Saybrook Road, south from Middletown to Spencer's for some fillets and roe and the remembrance of those by-gone days.