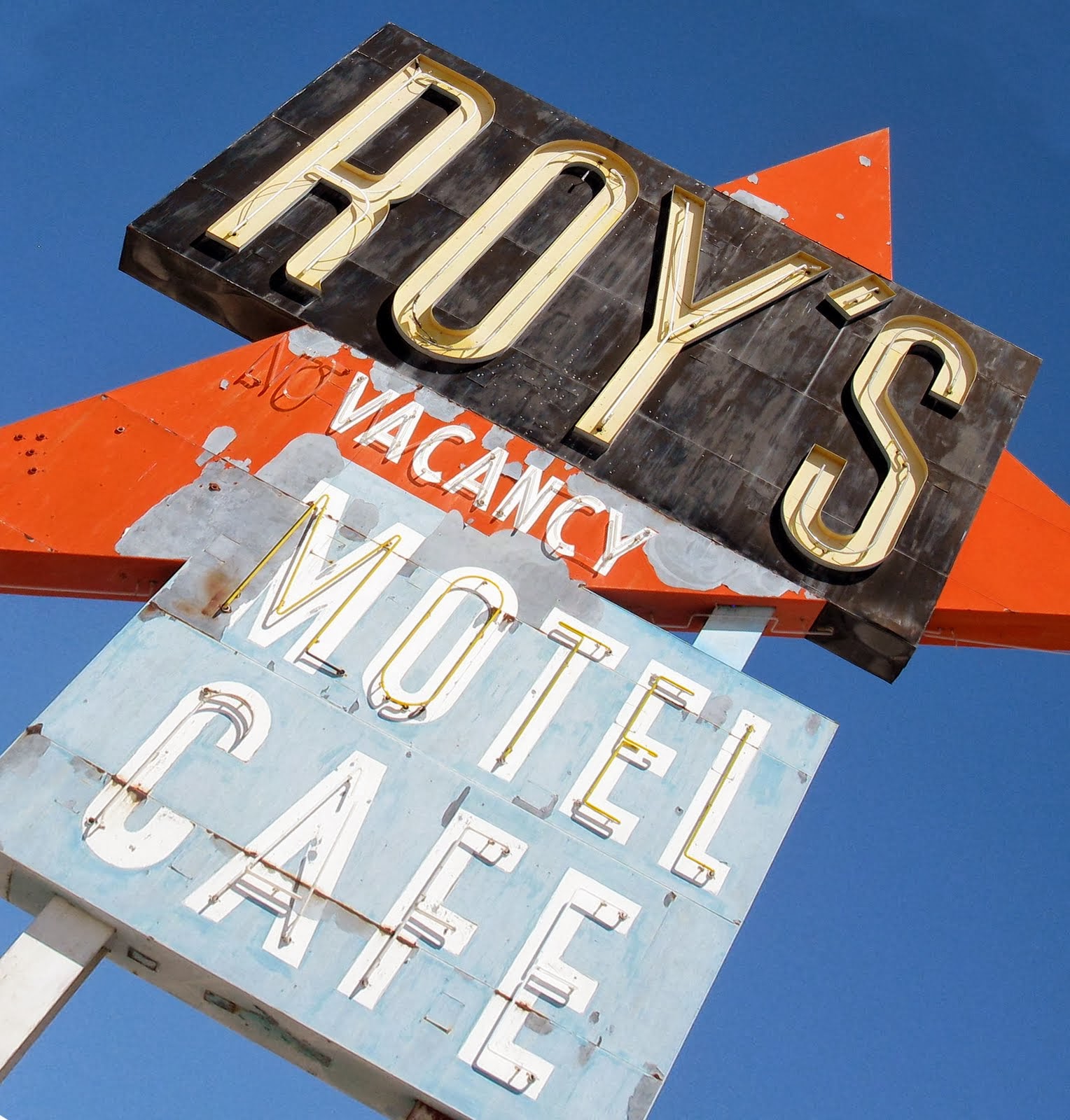 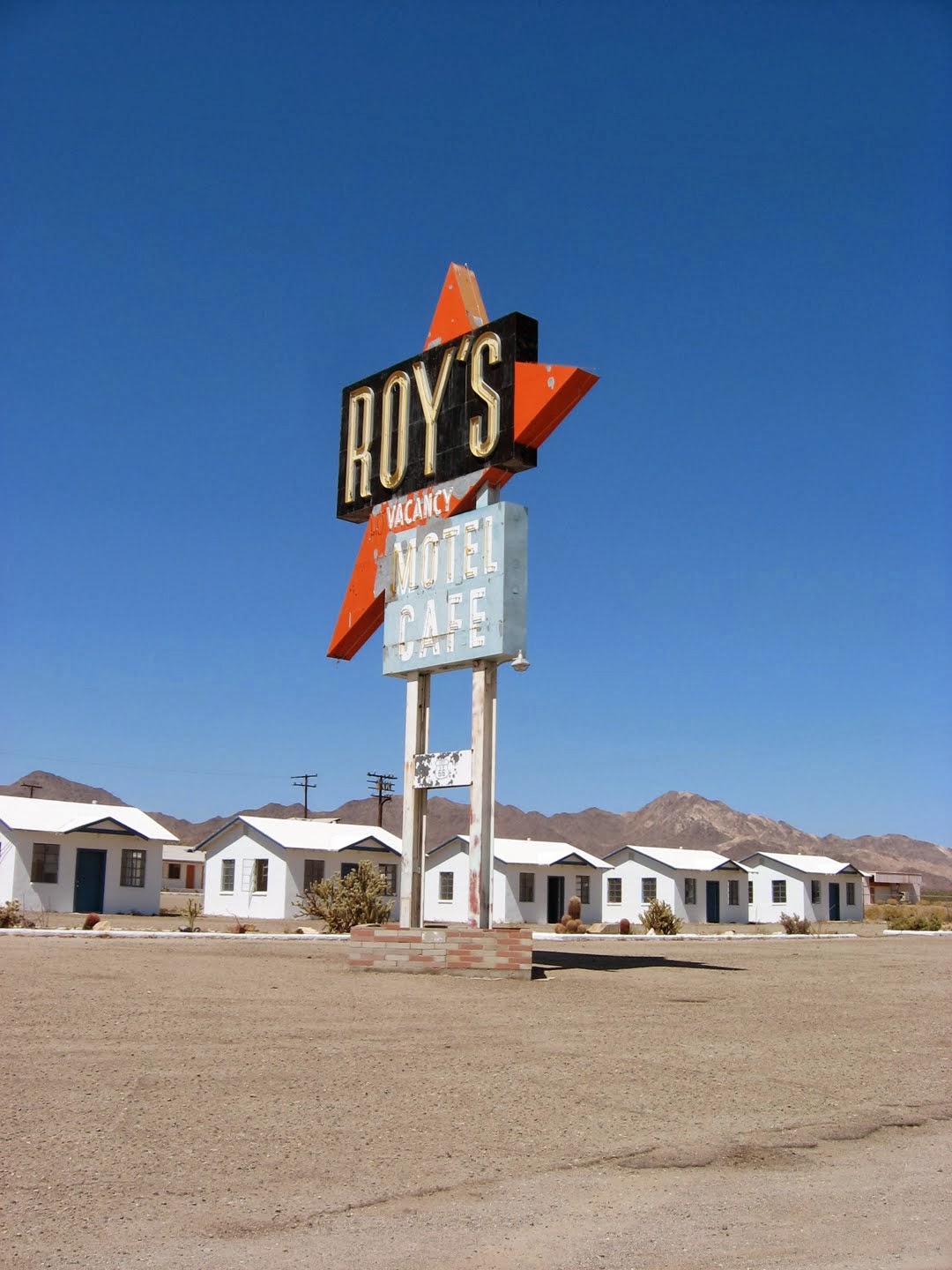 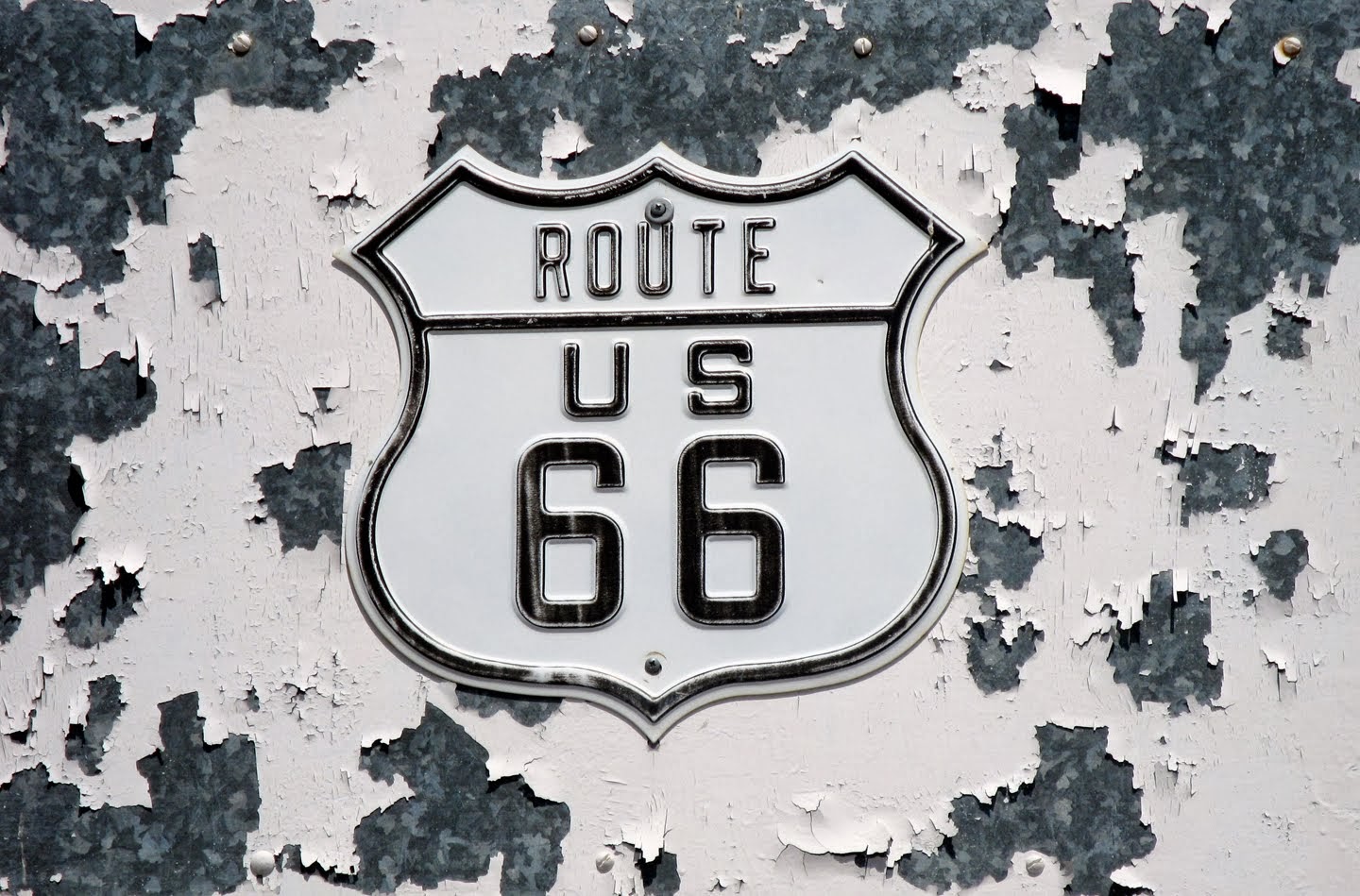 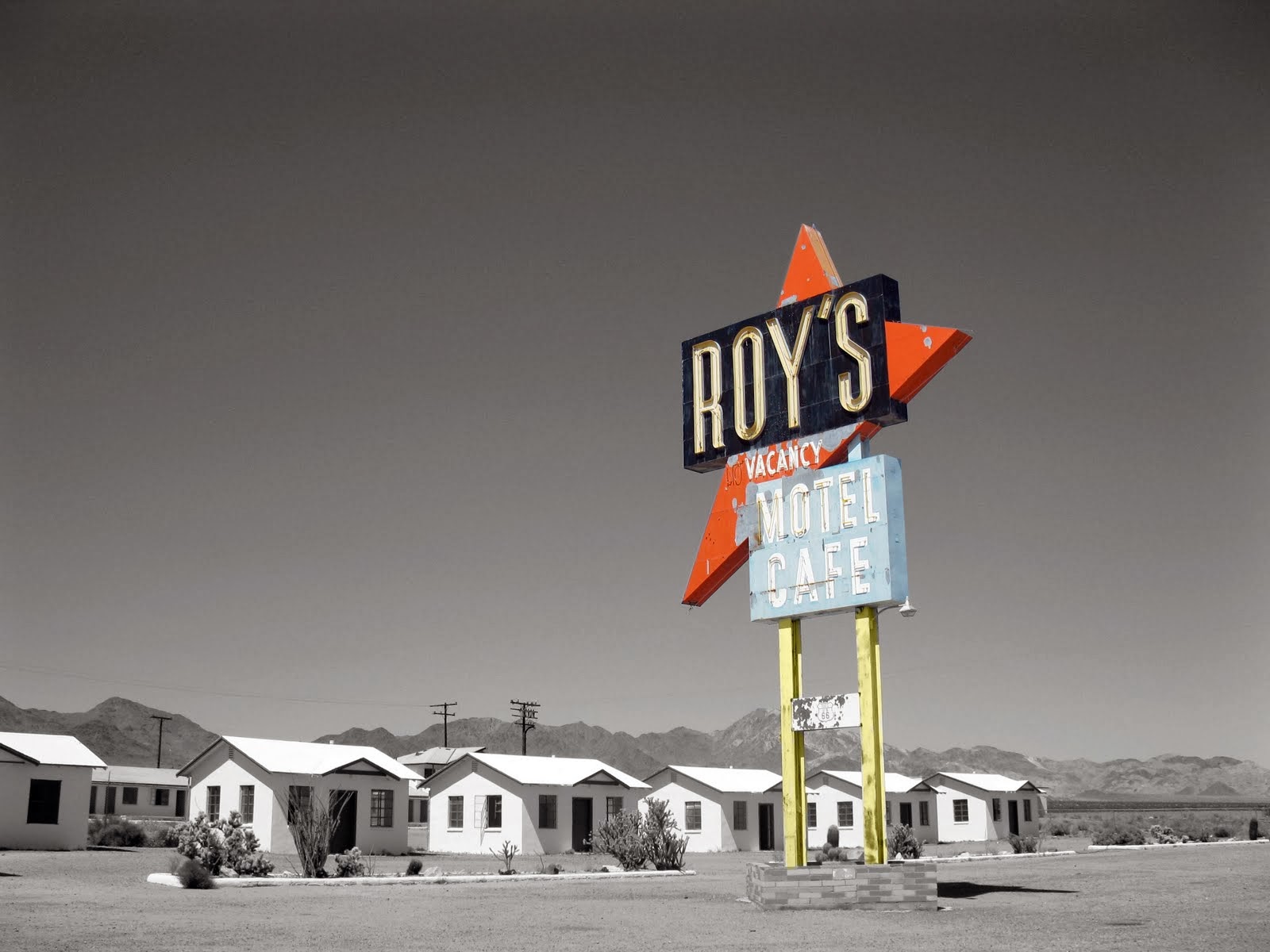 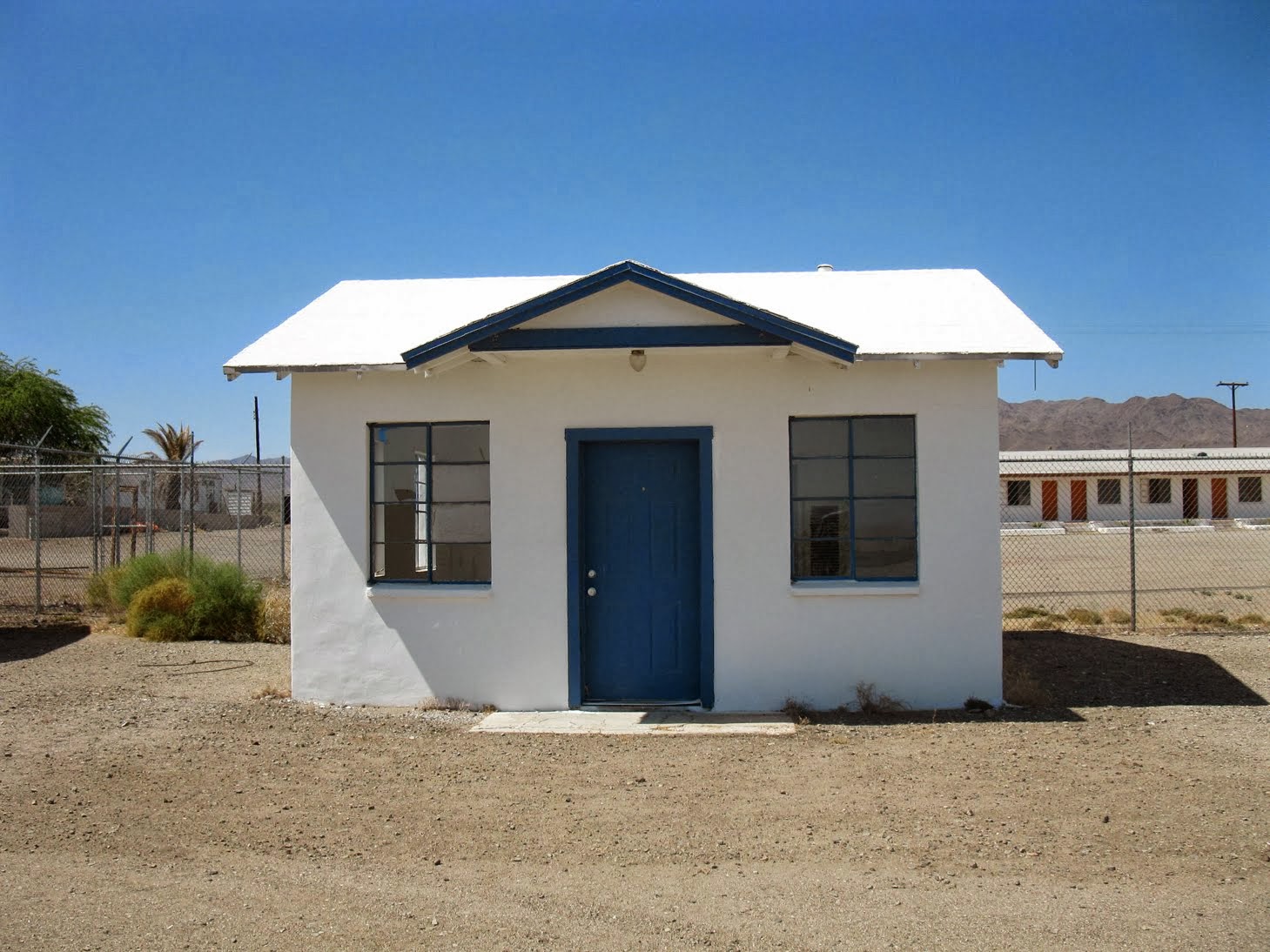 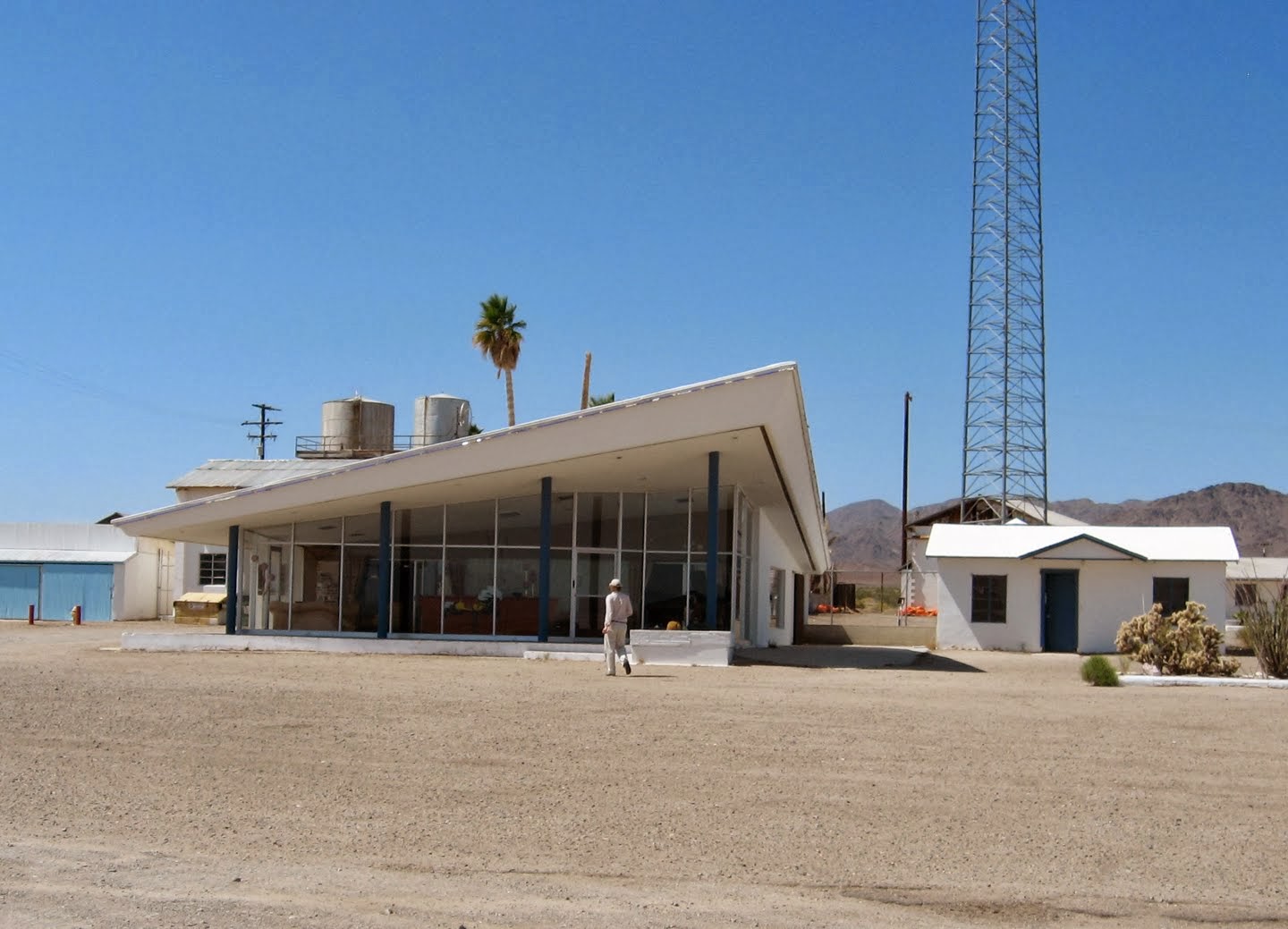 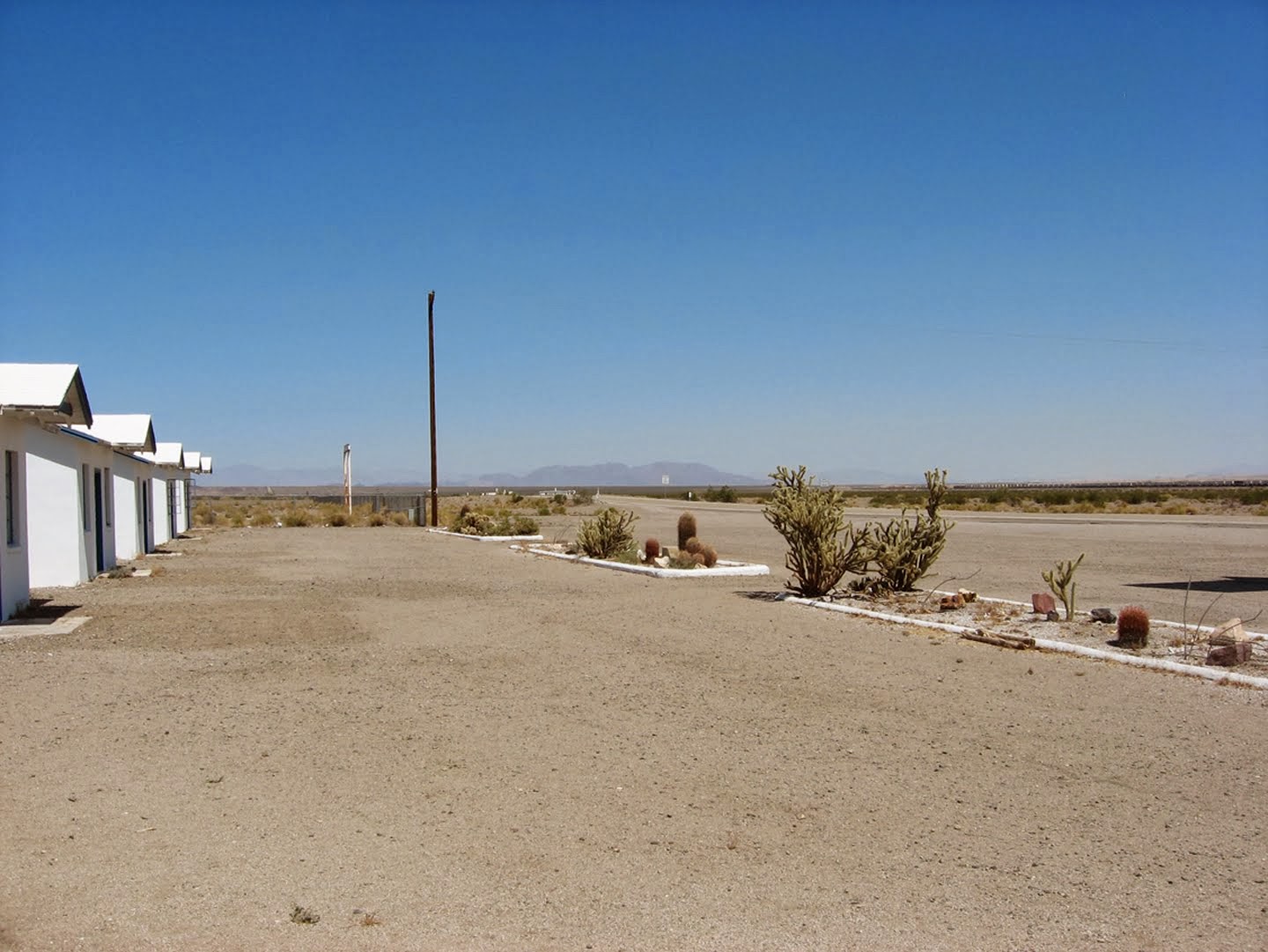 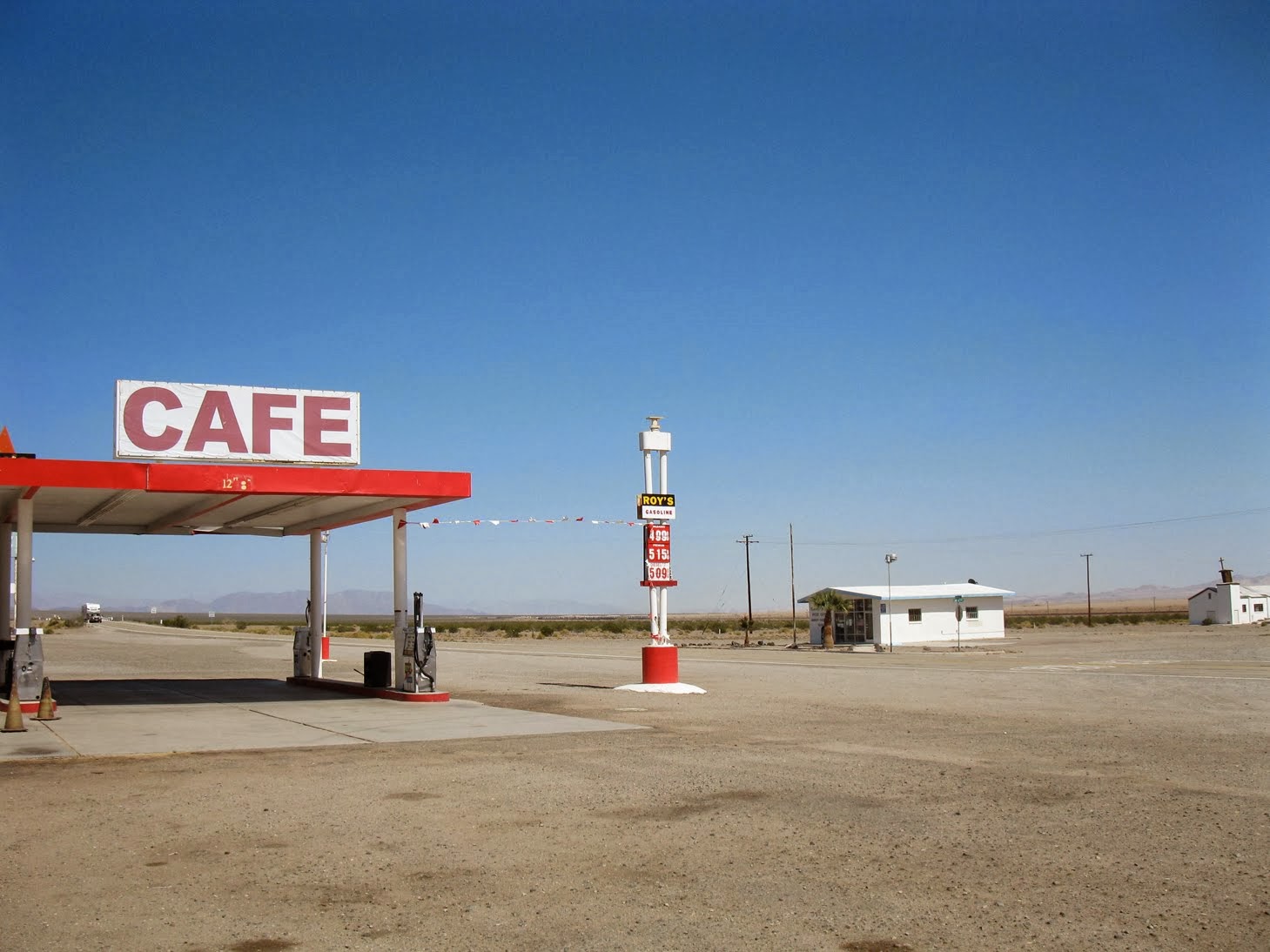 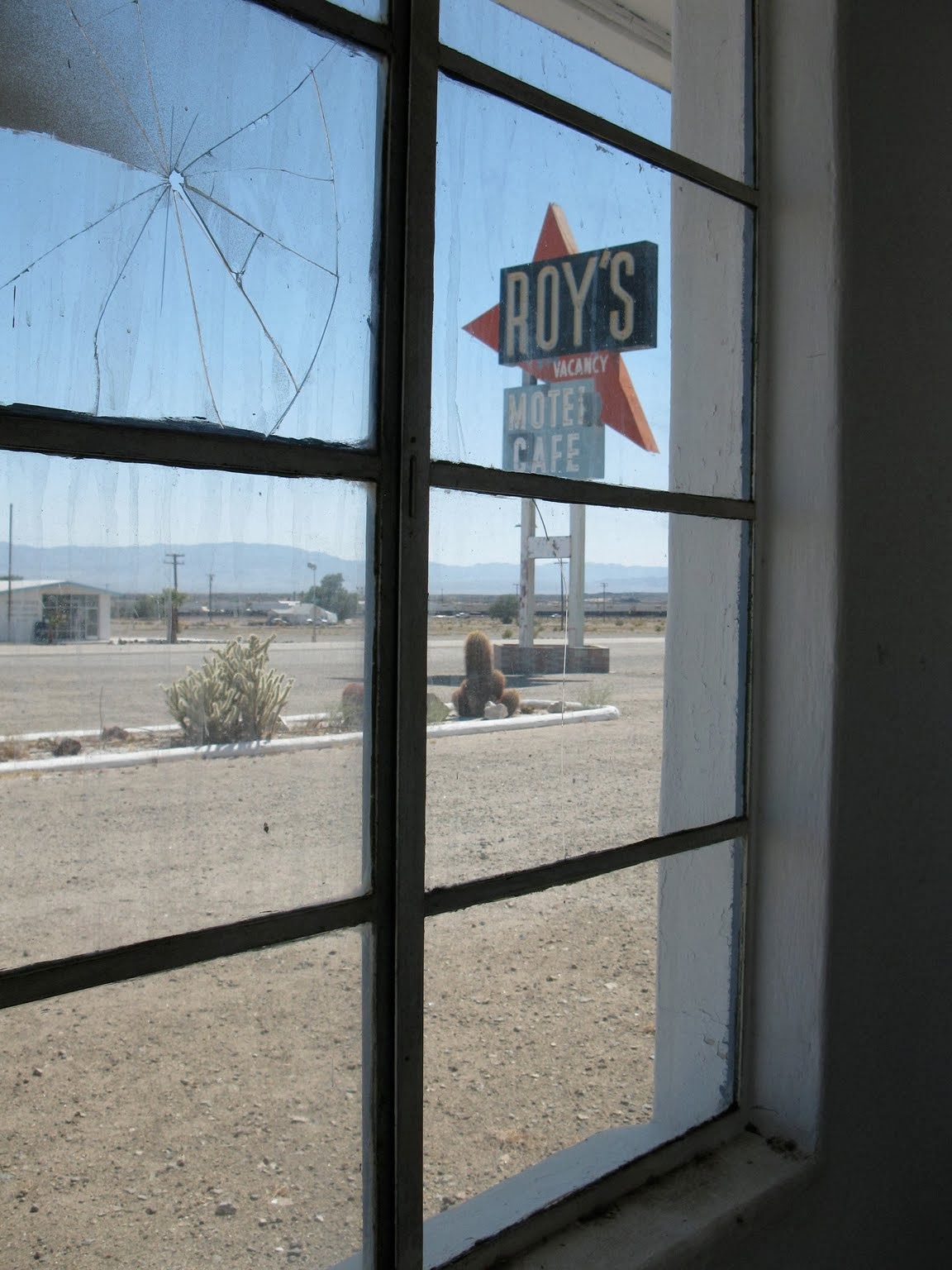 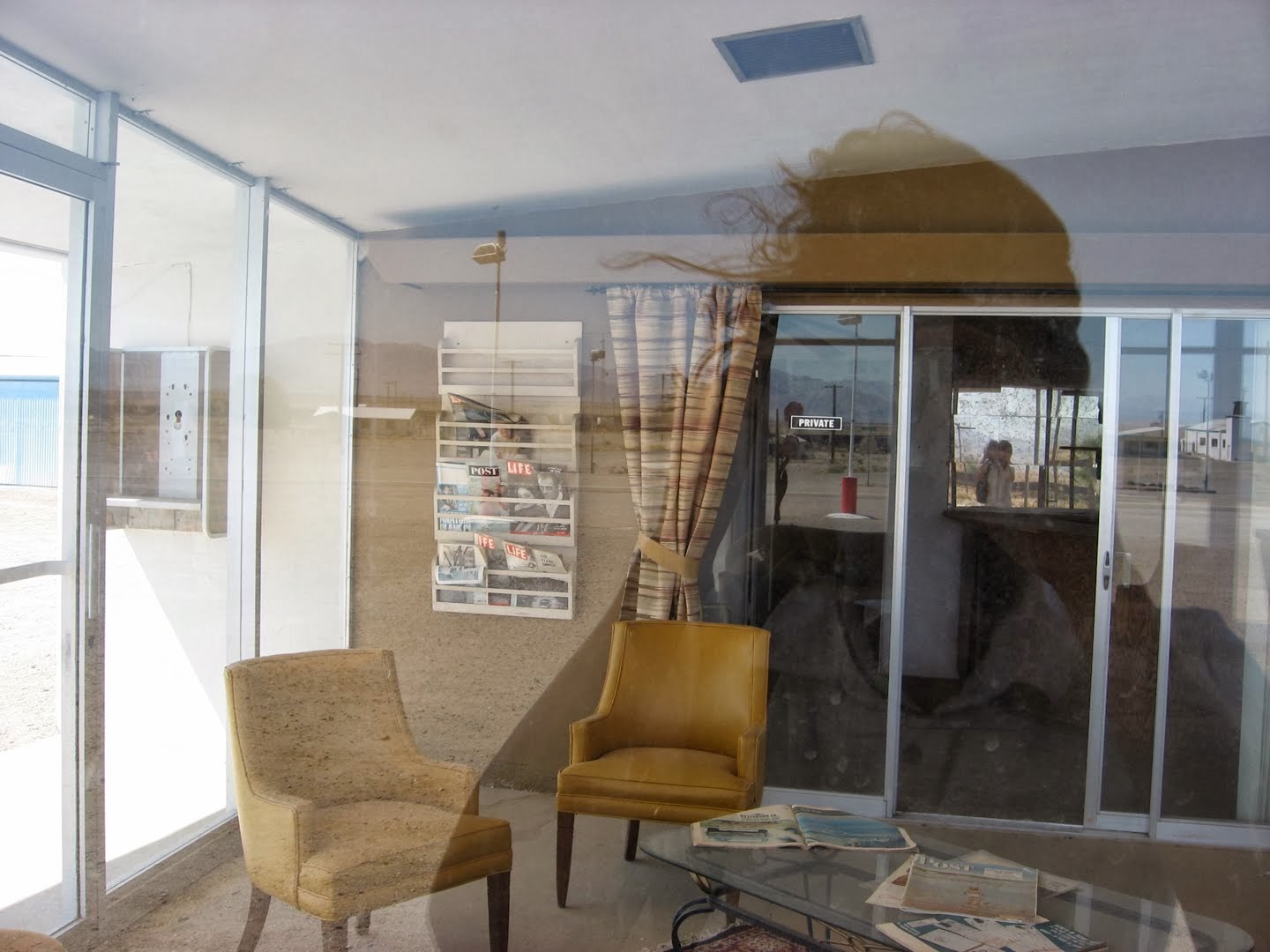 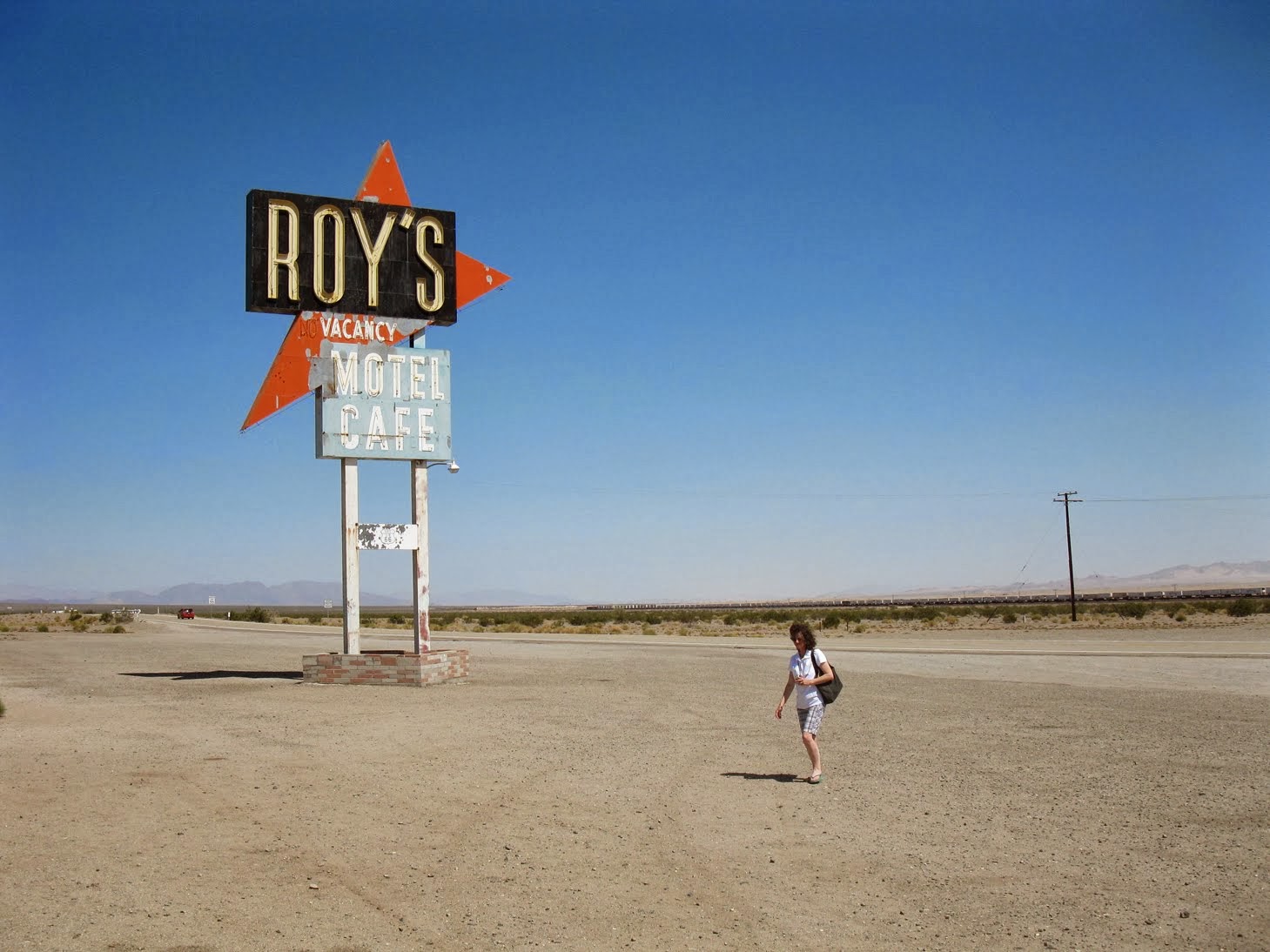 We're feeling particularly chilled on this bone-cold winter's day in Rhode Island and I can't help but dream of some faraway place that's not just hot, not just really, really hot, but California desert hot. And that would be Roy's Cafe on Route 66 in Amboy, California. We were lucky enough to visit this awesome top-10-in-my-book-of-eccentric-roadside-attractions place back on a 98-degree day in 2011, so here's a rerun of what we had to say:

In the Mojave Desert of eastern California sits the town of Amboy, a once-prosperous stop along Route 66 where weary drivers could gas up, get some grub and spend the night before heading out the next morning on another lonesome stretch of the Mother Road. Roy's Cafe and gas station was opened in 1938 by Roy Crowl, who owned the whole town of Amboy (not a very big place, but impressive nonetheless) with his wife Velma. The Crowls' daughter Betty married a Herman "Buster" Burris and together they expanded Roy's and made it a booming post-War success. And then, as was the case with most Route 66 establishments, the Interstate came along and dried up all the local business. Buster sold the town in 1995 to a party that then went into foreclosure and then Buster's widow bought it back in 2005 and sold it to its current owner, a Mr. Albert Okura, who promised to keep the yesteryear ambiance and reopen Roy's in the future. When we were there last spring (2011), the gas station was pumping $4.99/gallon gas, the cafe had cold soda and souvenirs and a busload of European tourists were milling about the place. The motel cabins were deserted but graffiti-free, like a well-preserved ghost town. The awesome decaying Googie sign reaches for the sky like a skyscraper in this hardscrabble no man's land to all fans of dilapidated roadside nostalgia. It was 100 degrees when we stopped by, a little chilly for these parts, but it was worth every bead of sweat to see such an amazing eccentric roadside site. Roy Orbison, Roy Scheider, Roy's of Amboy...there's a lot of greatness in the name Roy.
Posted by Gunnar and Sherry at 1:27 PM

An interesting post with some nice pictures. Looks hot! Cold here in England.