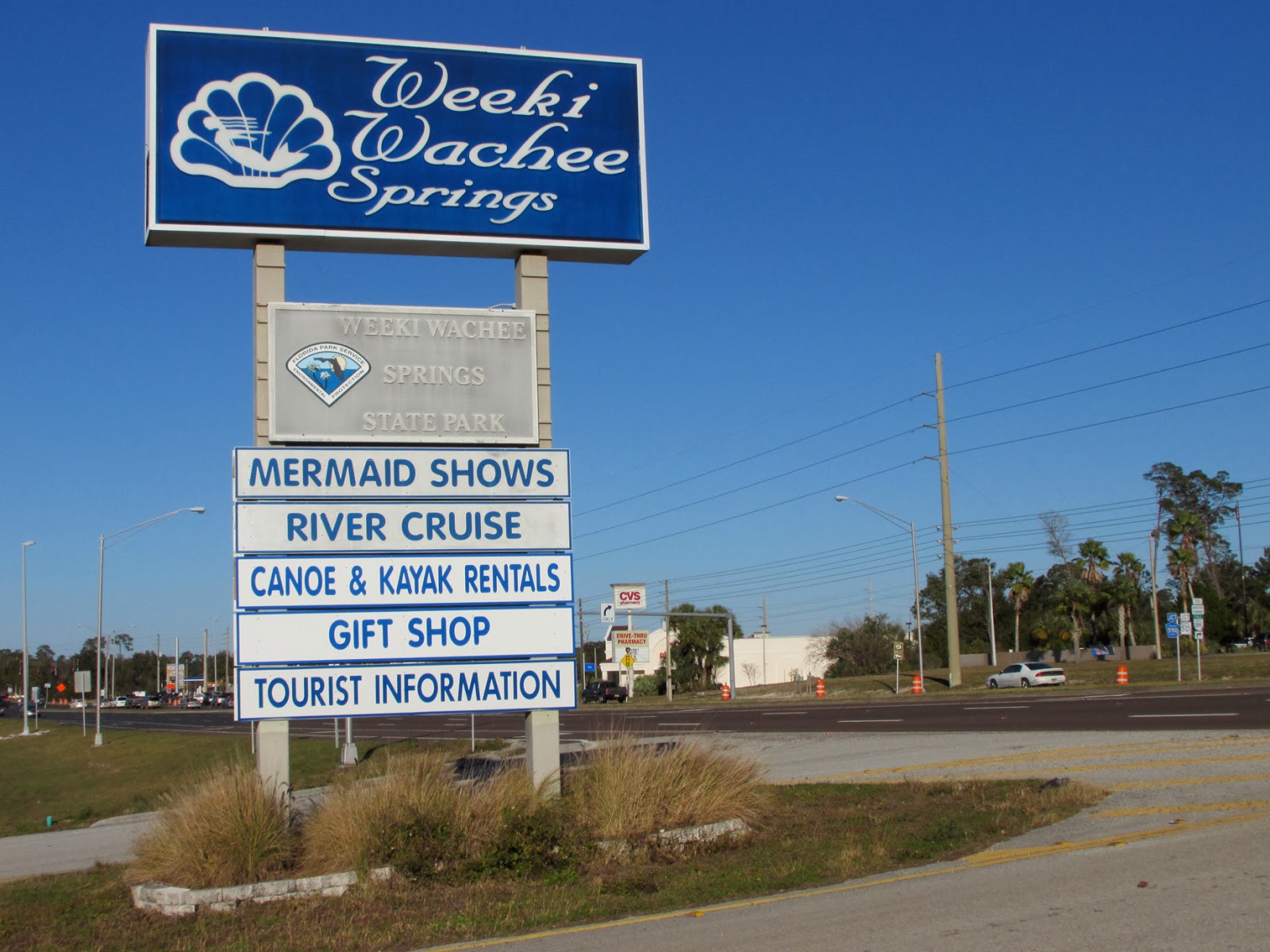 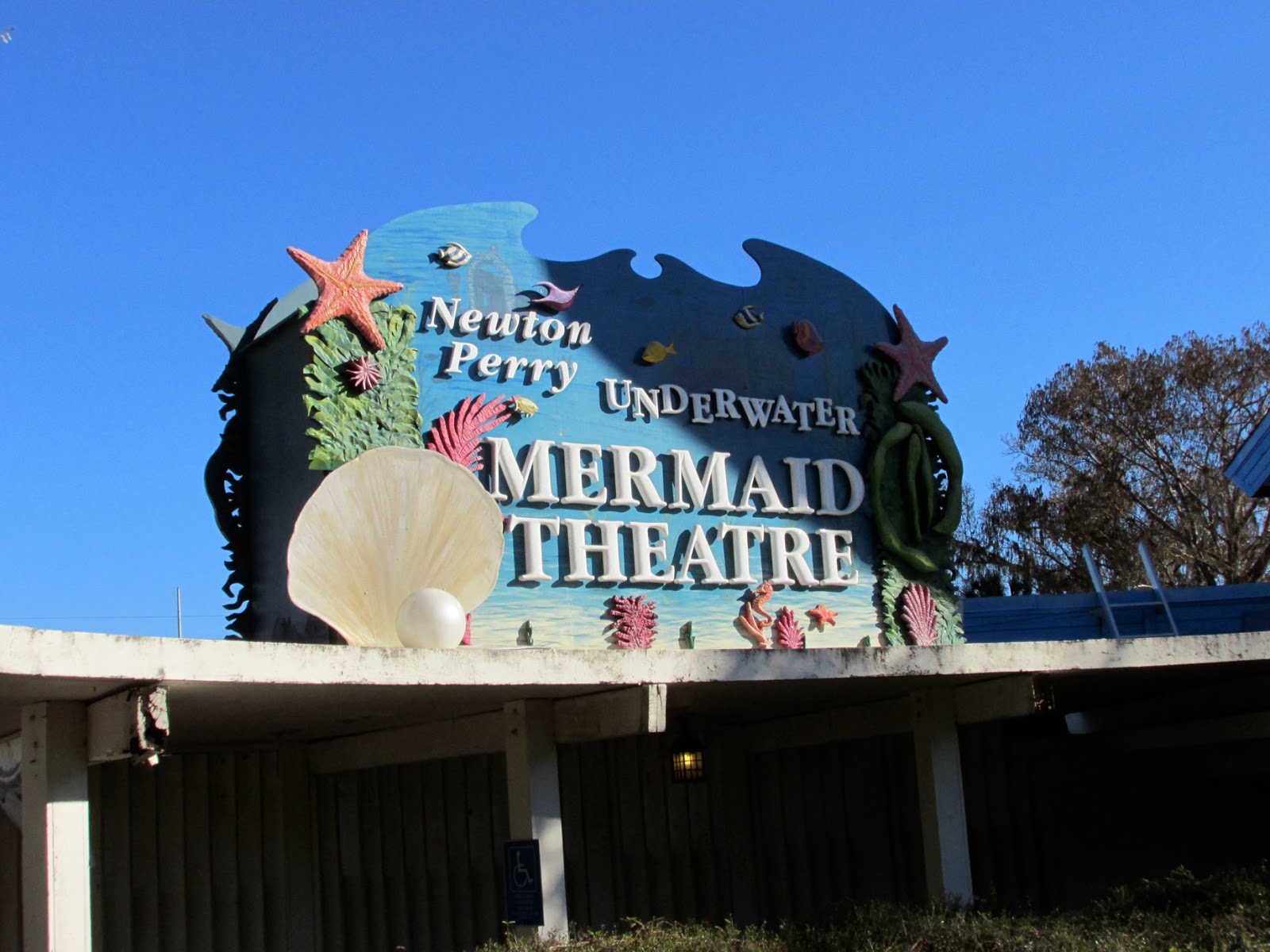 13 clams gets you admission to the mermaid show, a river cruise, a water park and the lush grounds. 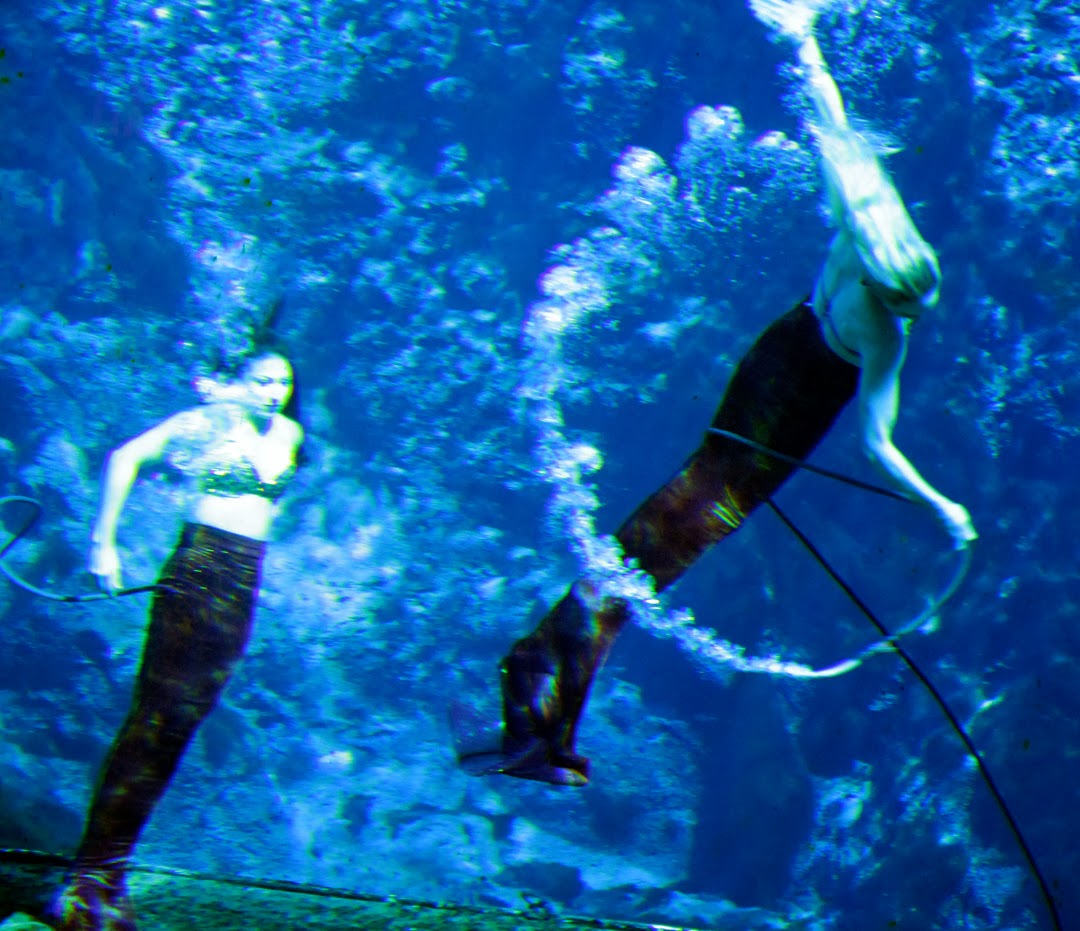 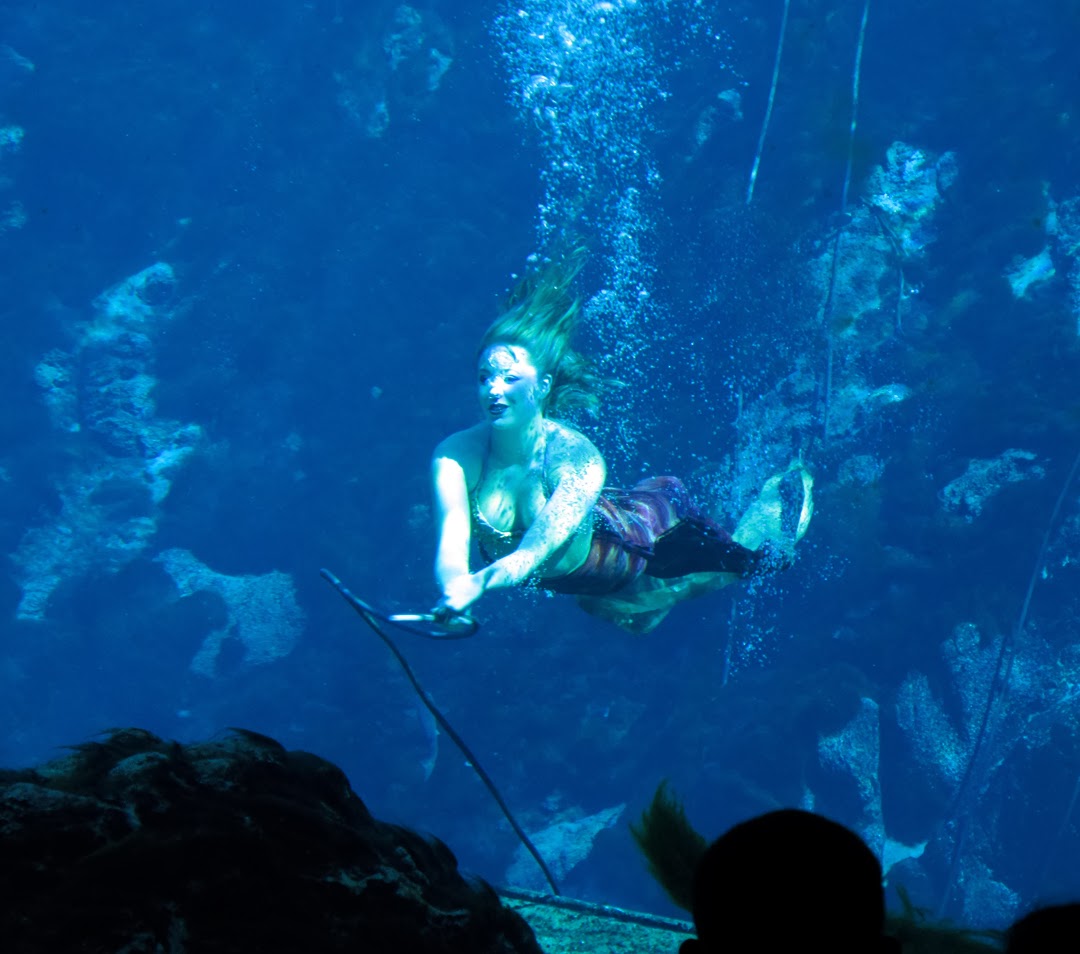 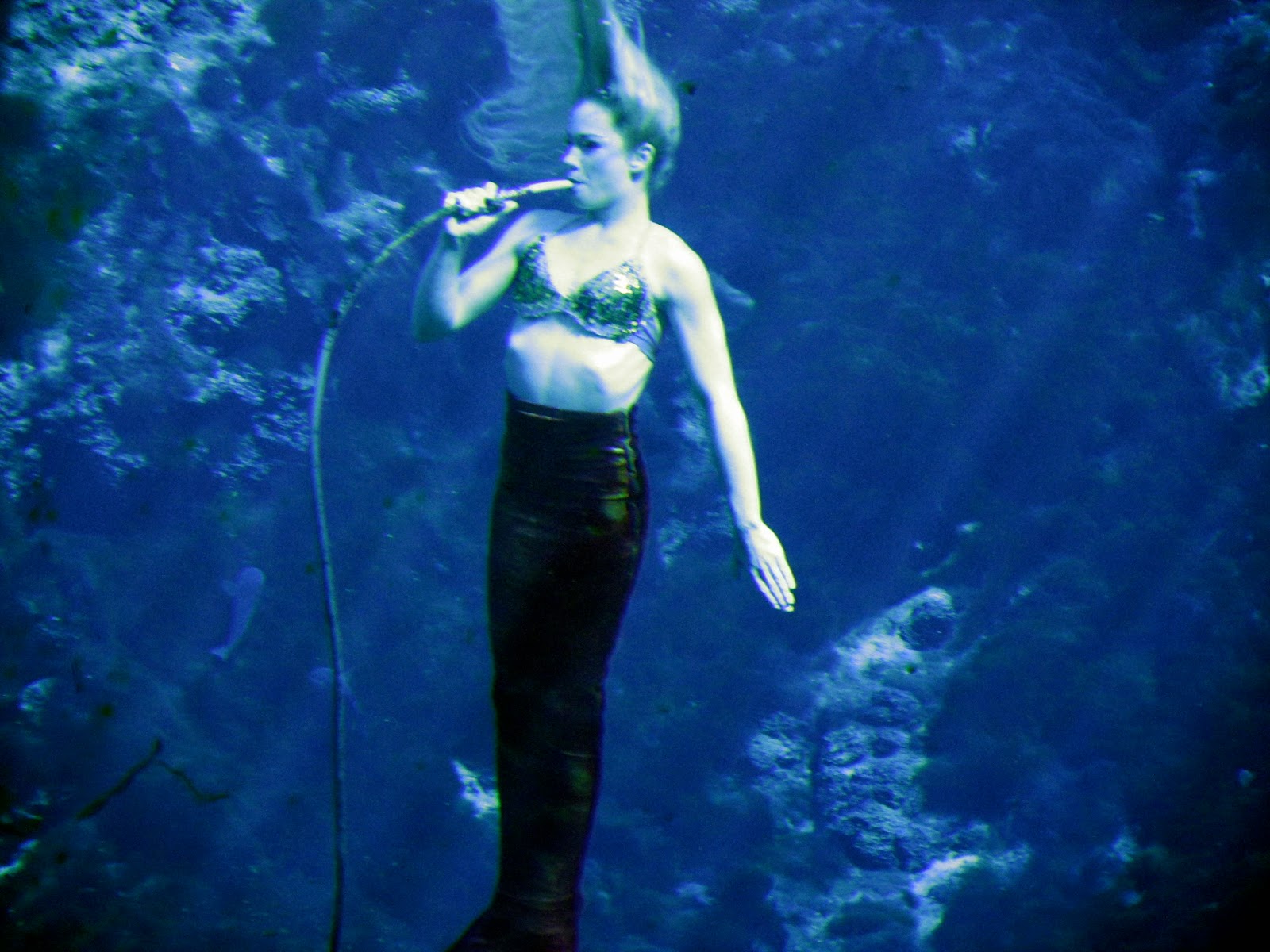 Okay, so they suck on airhoses. You would too. 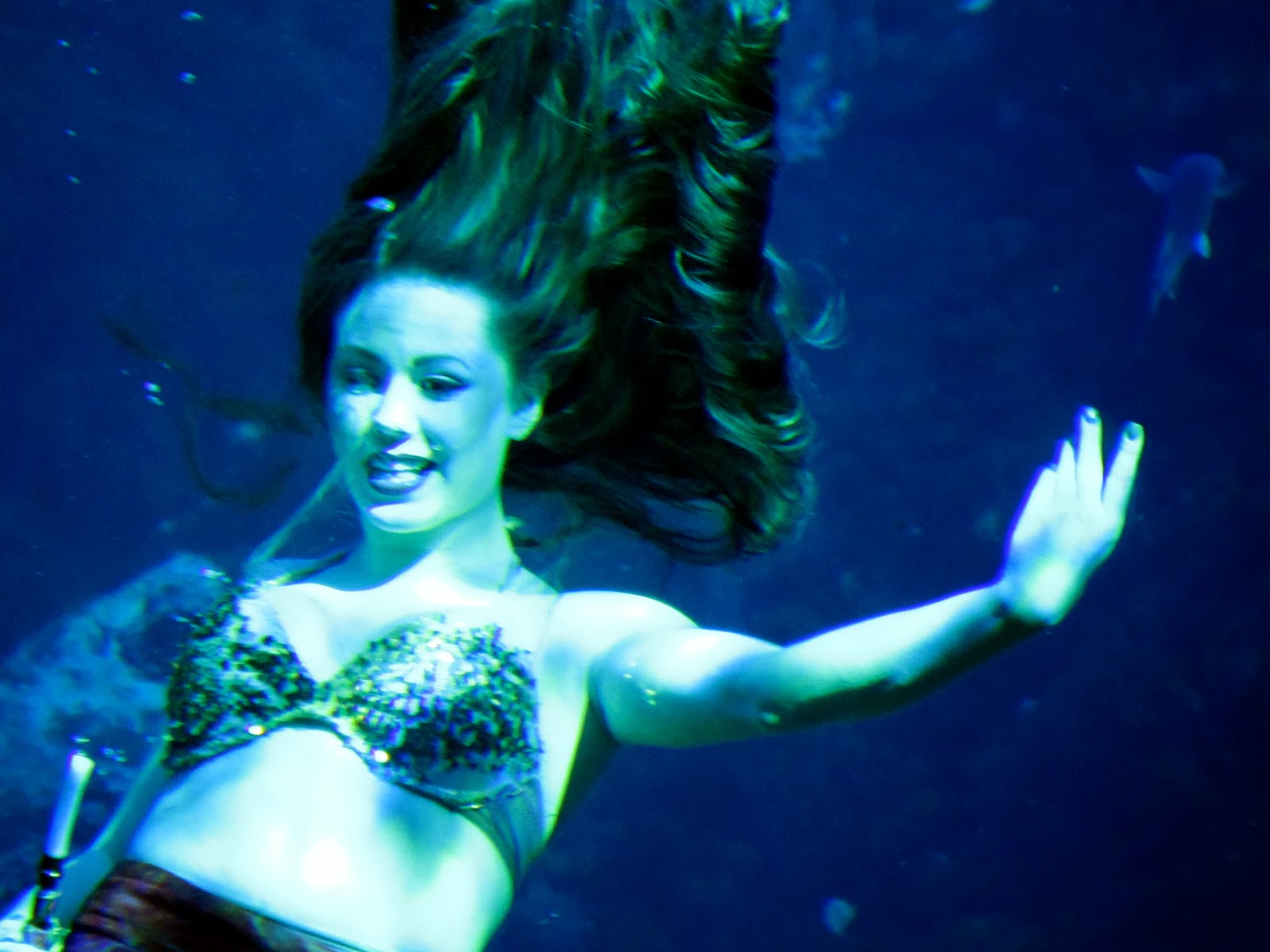 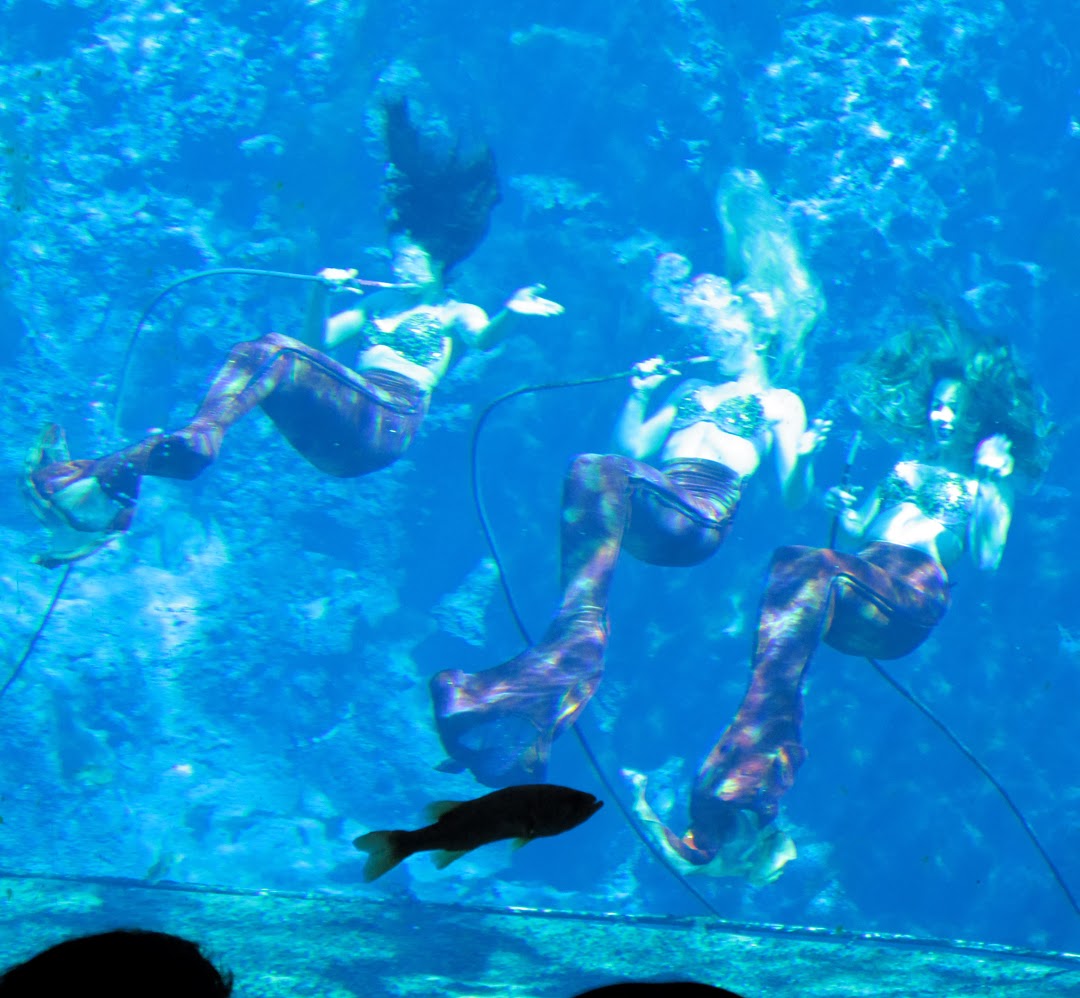 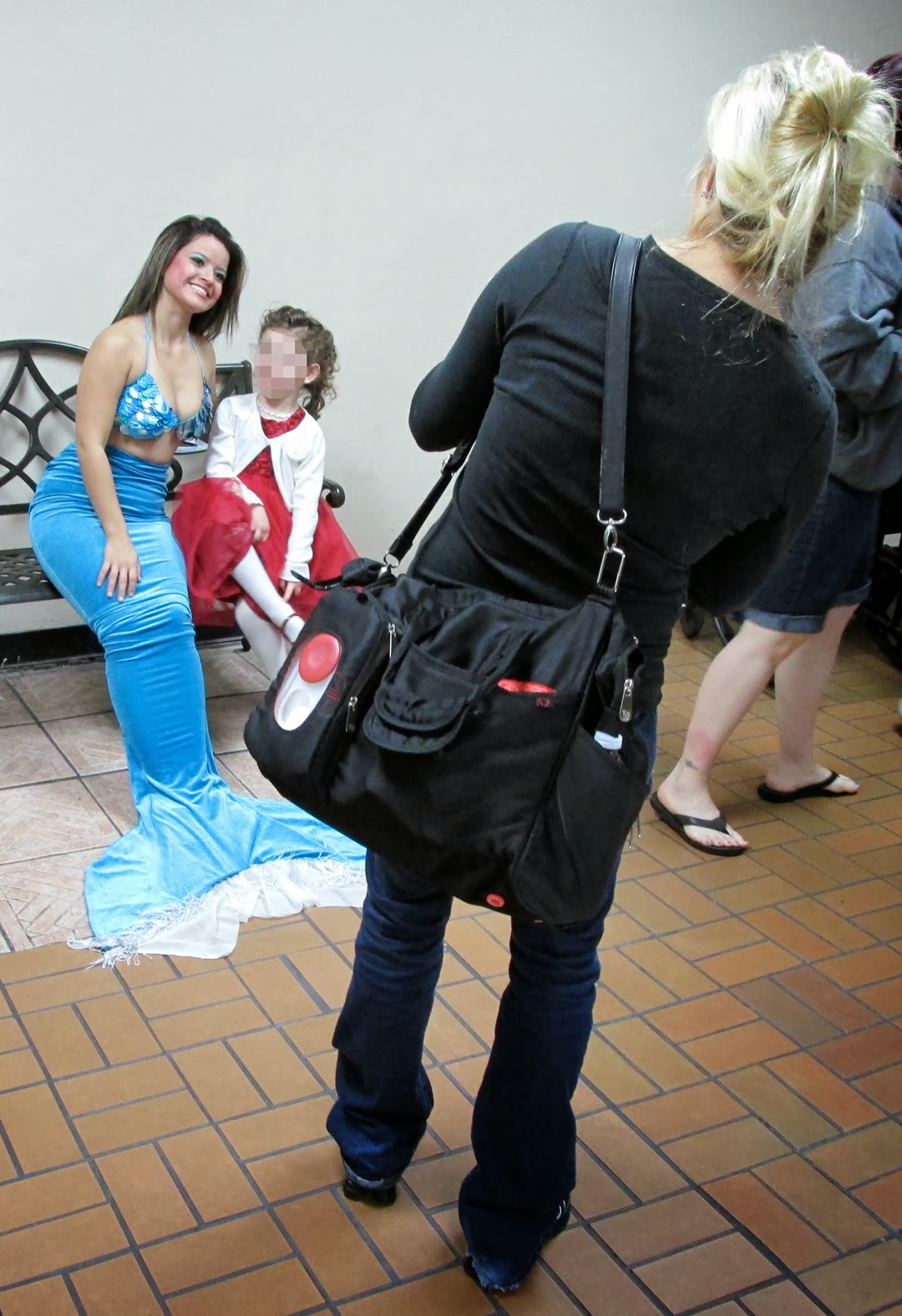 Lots of photo ops (and yes, it's a little pervy if a grown man does this). 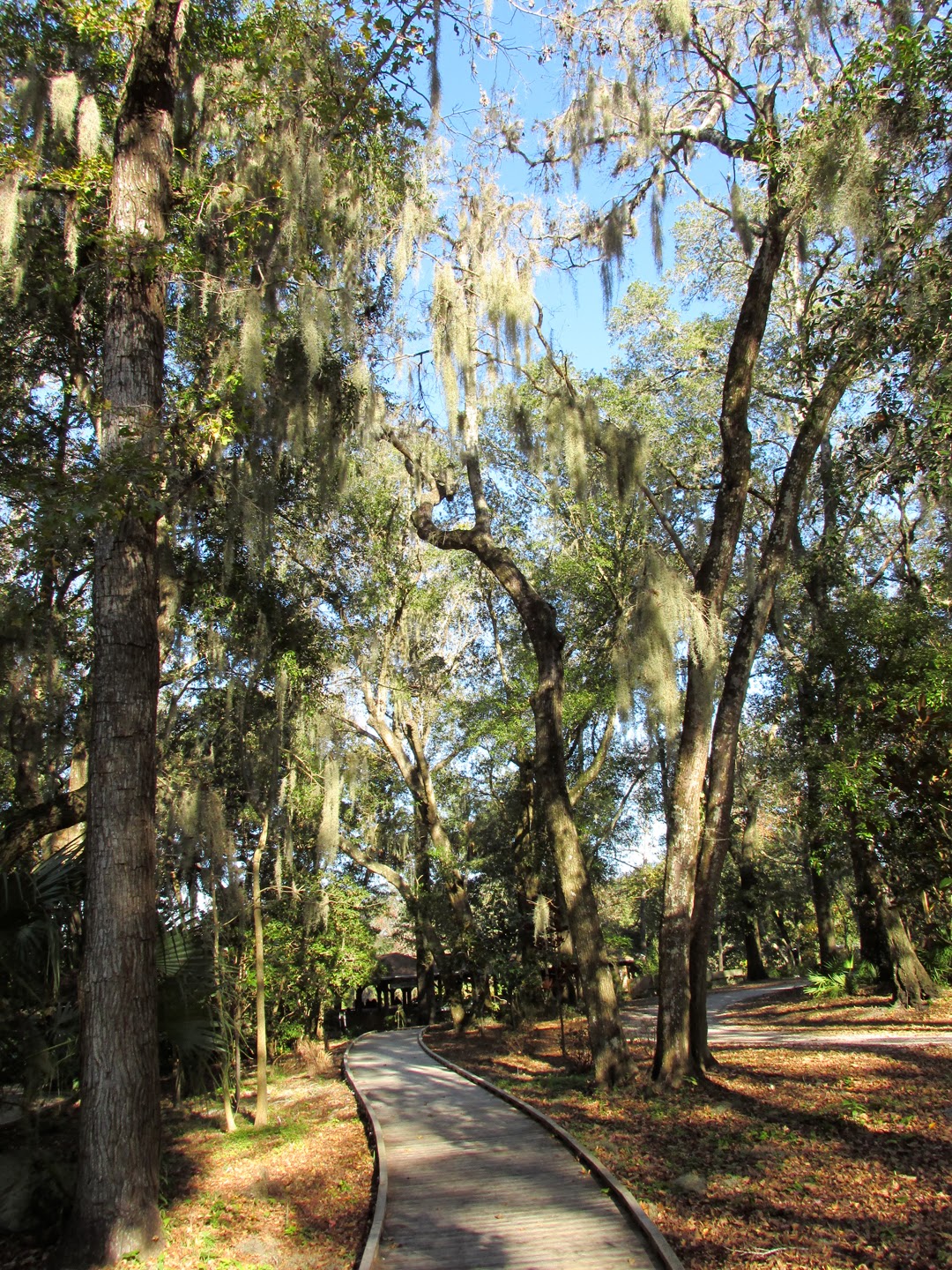 The grounds are beautiful... 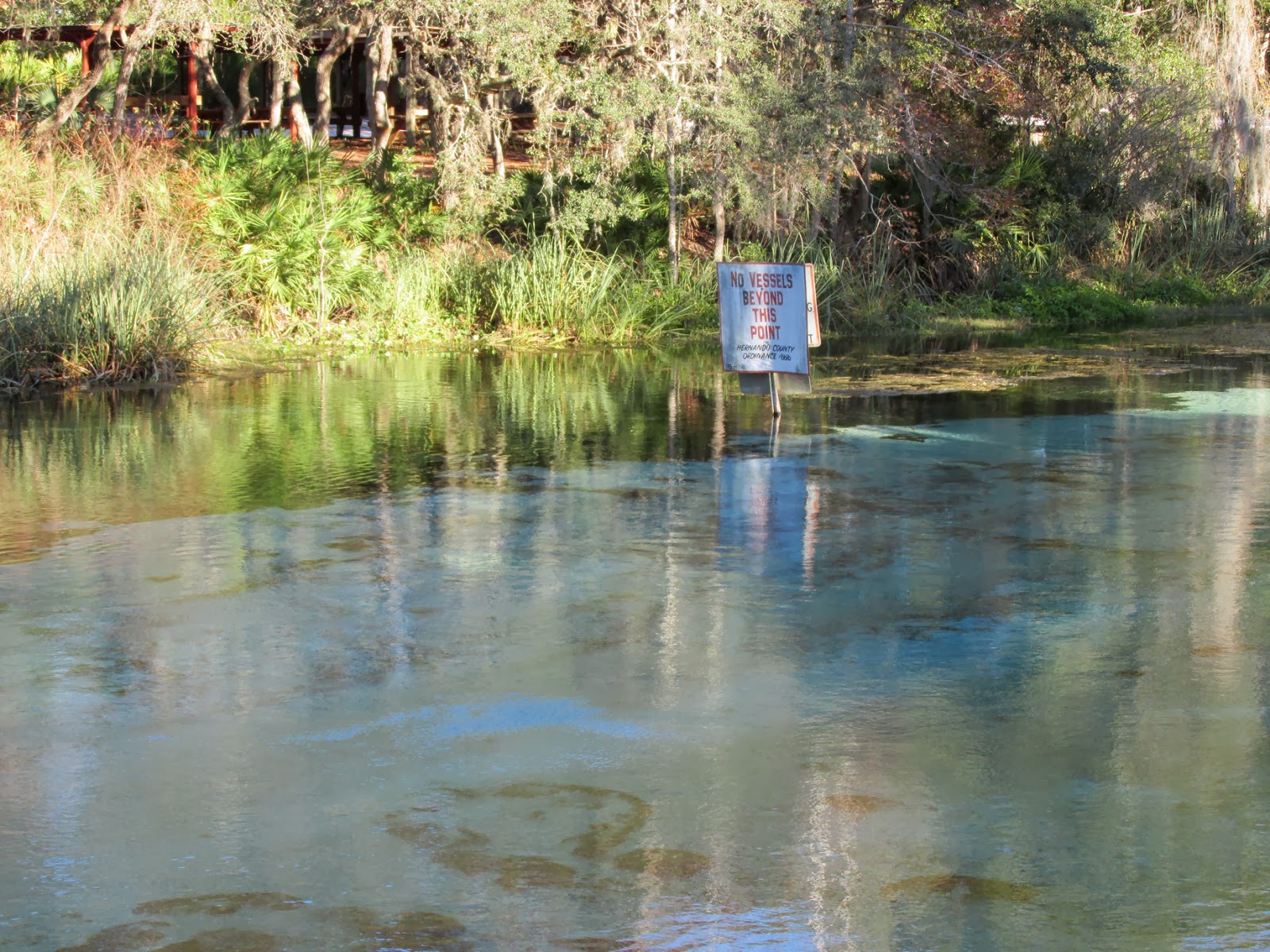 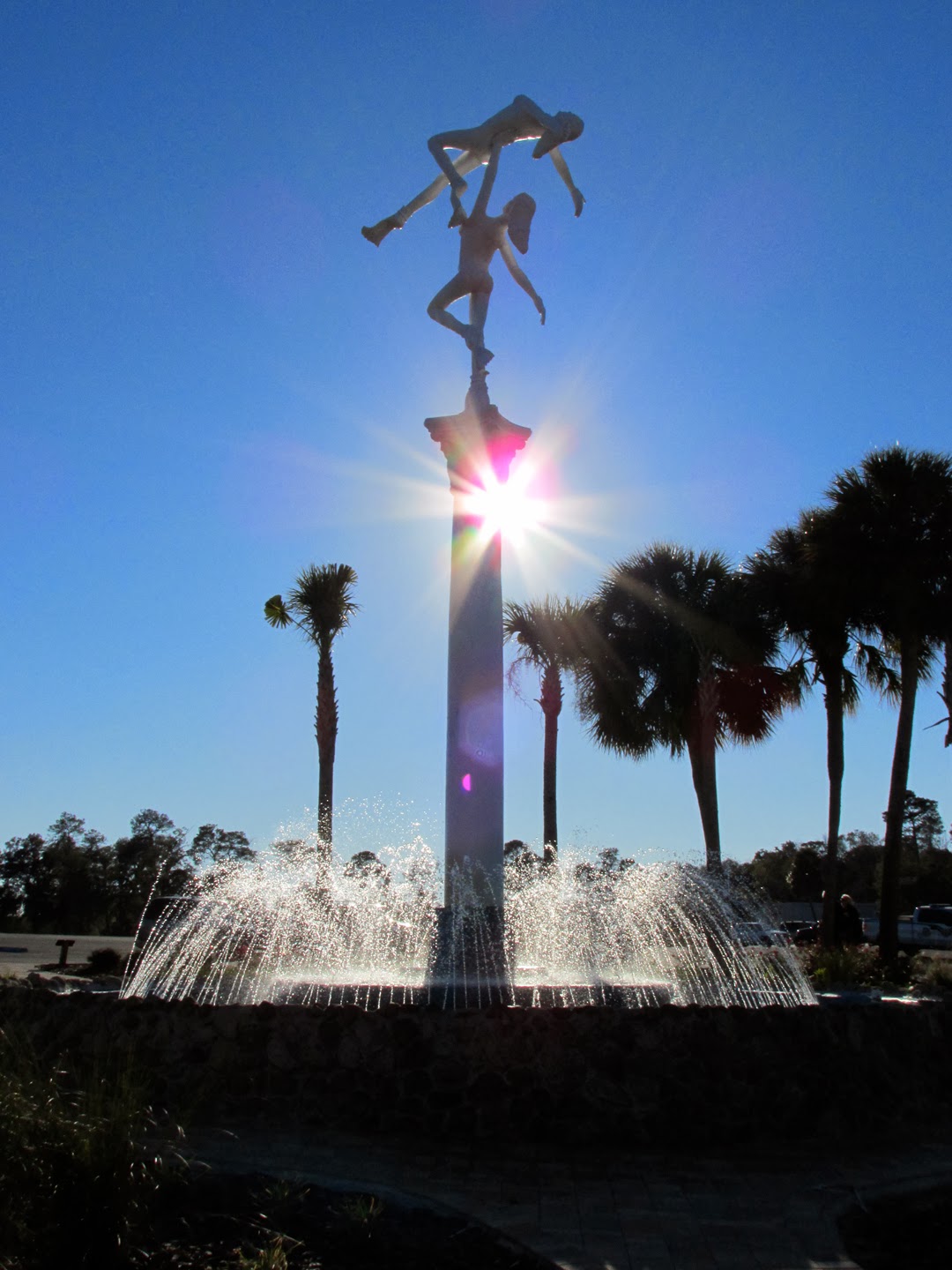 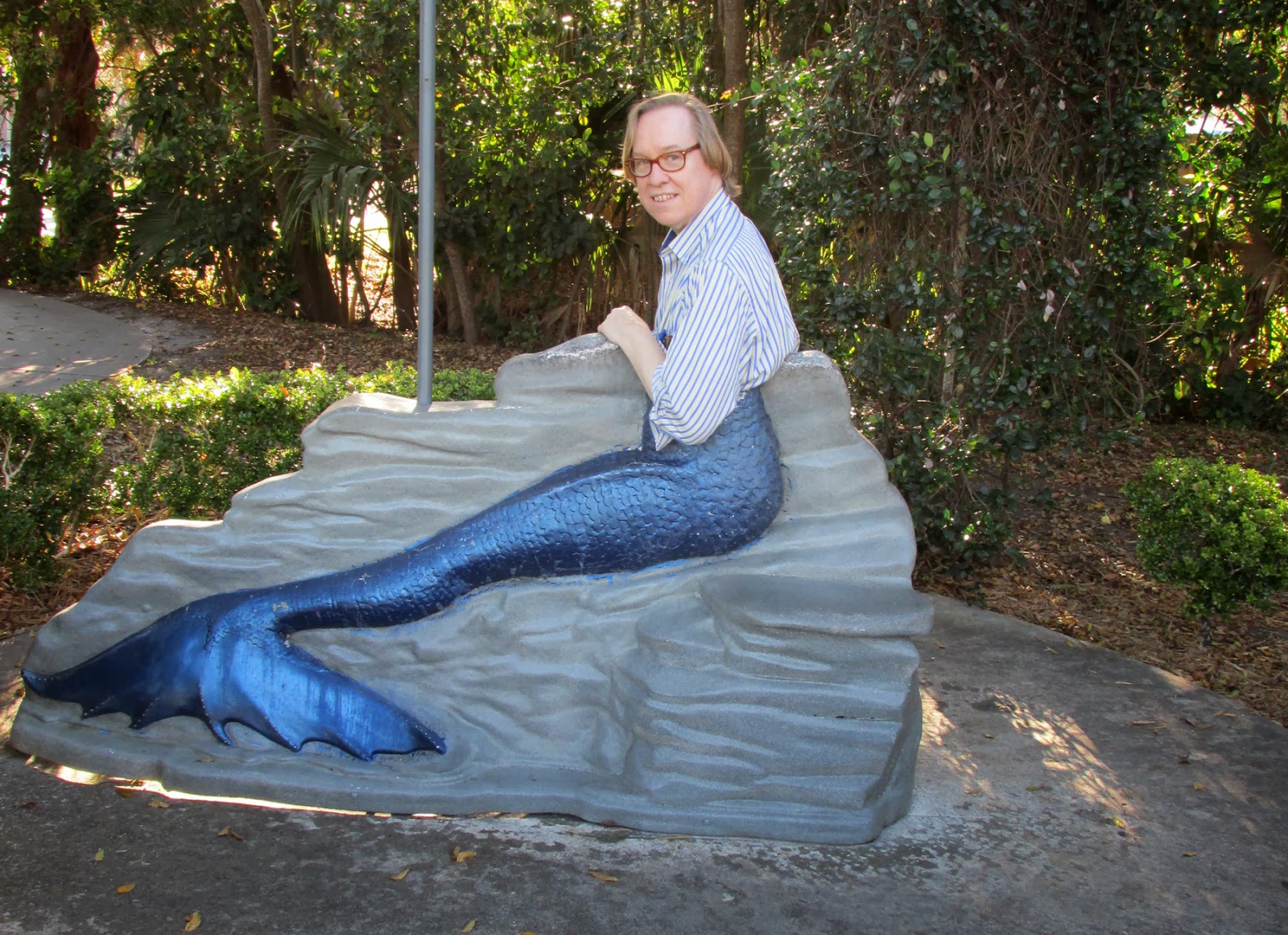 In 1946, a Mr. Newton Perry, an entrepreneur and former Navy SEAL trainer, spotted a location with a natural spring near Florida's central Gulf coast and had an idea. Why not invent an underwater breathing method using a hose instead of a tank and get a bunch of gals to dress up like mermaids and put on aquatic shows for the tourists? He built an 18-seat theater submerged six feet below the surface of the Weeki Wachee (that's Seminole for "little spring"), recruited local young ladies, started doing shows in October of 1947, and the place has been a Florida institution ever since. By the 1950s, Weeki Wachee had become a very popular tourist destination and in 1959, it was sold to the ABC TV network, who expanded the theater to 16-feet below and 500 seats. The '60s were Weeki Wachi's hey-day and many famous people (Elvis! Esther Williams! Don Knotts!) visited. The city of Weeki Wachee was incorporated in 1966 and today it boasts a population of between four and twelve, depending on who you ask (the mayor is a former mermaid). By the early '70s, Disney World became the 3000-pound shark in the mermaid tank and older attractions like Weeki Wachee saw their attendance drop dramatically. Things got pretty bleak until 2008, when the state took over and made Weeki Wachee a state park, forever saving it from becoming one of those neglected tourist attractions of yesteryear.

And on behalf of eccentric roadside attraction fans everywhere, I'd like to say WAY TO GO, FLORIDA! Thank you for preserving a true sample of Old Florida roadside culture. It's nice to know a place some would call kitschy is actually a beloved state institution and worth protecting. Okay, so maybe the state was more interested in preserving the beautiful grounds, wildlife and natural spring (it's so deep, the bottom has never been found!), but as long as lovely young Floridians are donning those crazy finned costumes, I'm happy as clam.
Posted by Gunnar and Sherry at 1:57 PM

One of the first things I did when I moved to Florida some 30yrs. ago was take a special trip to see the Mermaids. They are worth a trip from anywhere. I love the Mermaid costumes but they did a number in high heels that I will never forget.

I agree, luvlinens. My grandma took me to Weeki when I was a little kid and I finally made it back 40-plus years later.

Newt Perry started at Silver Springs and later perfected his underwater breathing techniques at Wakulla Springs near Tallahassee before he opened Week Wachee.

Let me know next time y'all visit the Sunshine State!

Rick, We were in Florida just briefly on business but I managed to sneak in a day at Weeki. Next time we're in Florida, though, I'll look you up!

Great to know it's still open! I first saw Weeki Wachee in the early 1970s, before Disneyworld had much impact, and it has stuck in my mind ever since.