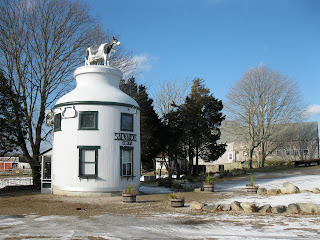 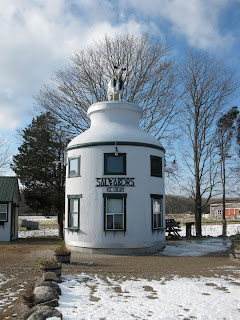 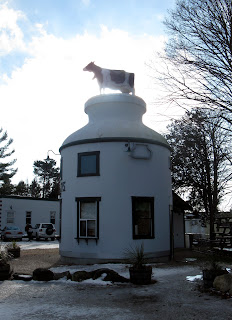 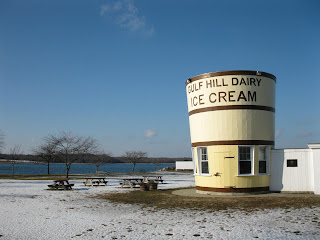 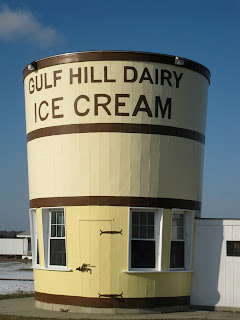 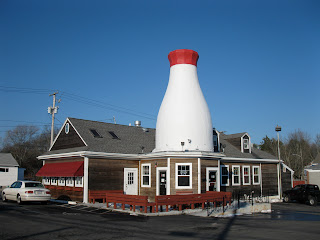 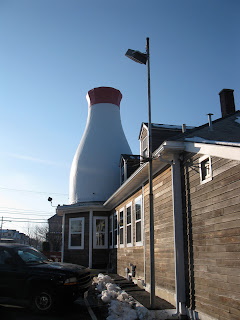 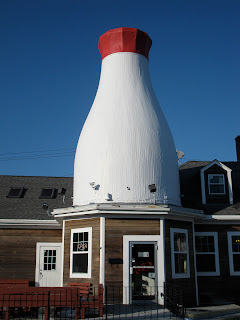 There's a 15-or-so-mile stretch in southeastern Massachusetts that could be called the epicenter of dairy-related mimetic architecture.  Salvador's, in South Dartmouth, is an ice cream parlor that's in the shape of a 30-foot milk can that dates back to 1936. It's been spectacularly renovated in recent years, complete with life-sized cow sculpture atop its roof. A mere two miles away in Dartmouth is the 20-foot Gulf Hill Dairy Ice Cream bucket. It's from 1929 and was lovingly restored and reopened in 2008 as Oxford Creamery At The Bucket after being shuttered for more than 20 years. It was moved from its original location to a lovely waterfront spot in Apponagansett Park, where they serve food, beverages and ice cream seasonally. Thirteen miles north in New Bedford sits G & S Pizza. They took over a beloved local landmark in 2006 that was originally Frate's Dairy, an ice cream parlor from the 1930s with a 52-foot milk bottle, and have been serving ice cream, pizza and other fine edibles ever since. The bottle is in superior condition, and was white and gleaming against the blue sky when we were there recently. We've also had the pleasure of visiting The Milk Bottle Restaurant, 24 miles away in Raynham, Mass., which was the sister milk building that Frate's built back in the '30s. And we hear there's another big milk bottle in Boston, but we'll have to save that for another trip.

So be on the lookout for these special places and join in the commerad-dairy. You wouldn't want them to slip pastyoureyes. I won't udder another word.
Posted by Gunnar and Sherry at 2:23 PM

Glad some milk cans are kept in good repair. Our North Smithfield can, after years of a big "Save The Can" fight, lies in udder ruin. Buts me in a bad mooood whenever I pass it.

I know what you mean Bill, but there's no use crying over, oh never mind.

Man, I was so close when traveling US-6 through New Bedford a couple years ago! Completely missed these but now I know they exist, thanks.