The big picture: The World's Biggest Easel of Goodland, Kansas 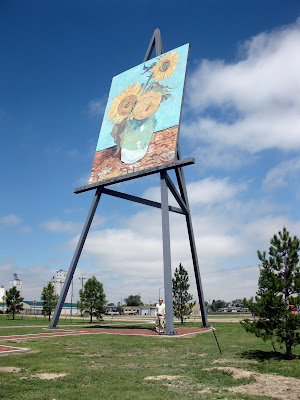 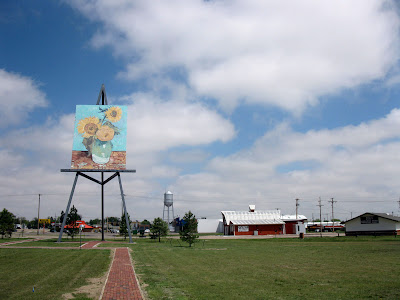 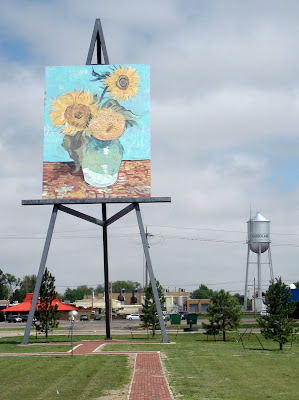 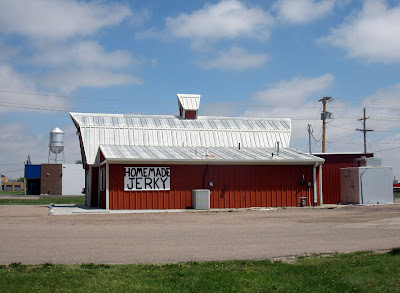 While visiting the easel, you can whet your palette... 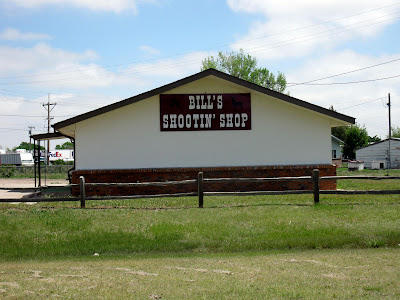 ...or brush up on your shootin'.
A lot of people think the Plains states of the USA are, well, a bit too plain and a bore to drive through. We couldn't disagree more, as small Midwestern towns are always doing big, kooky things to get you off the Interstate and driving down their Main Streets. Such is the case with the western Kansas farming town of Goodland, 17 miles from the Colorado state line. Here you will find the world's biggest easel, clocking in at 80 feet tall and 45,000 pounds. On it sits a 32-by-24-foot reproduction of one of Vincent Van Gogh's famous sunflower paintings, an appropriate subject, considering Kansas calls itself The Sunflower State and the yellow beauties are a major crop around these parts. And while the easel is the world's biggest, the painting is far from being the world's largest. That distinction belongs to David Aberg's 86,000-square foot "Mother Earth" of Angelholm, Sweden. The easel and painting are still pretty darn big, though, dwarfing a nearby Goodland water tower, jerky shop and gun store. This is one of three giant Van Goghs done by the Canadian conceptual artist Cameron Cross. His goal is to create colossal reproductions of all seven Van Gogh sunflower paintings in seven different countries spanning the globe (the other two are in Canada and Australia). There's a lovely little park around the easel and while we were there some other folks trickled in to walk their dogs and gawk open-mouthed at Goodland's giant flowers in the sky.

Thank you, Goodland, for your over-sized art appreciation that got us off I-70 for a few minutes of fun and frivolity. Way to Gogh.
Posted by Gunnar and Sherry at 10:46 AM

That was pretty awesome! Definitely the biggest darn easel I have ever seen. I'm surprised that it (at least the gaint painting) isn't one of a kind.