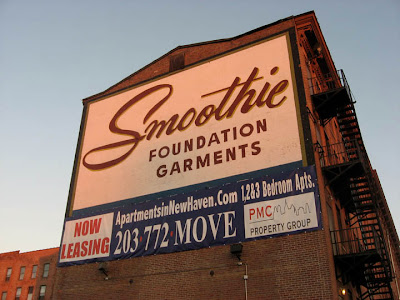 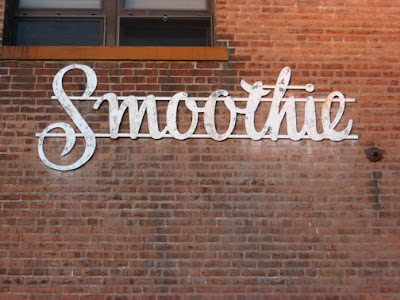 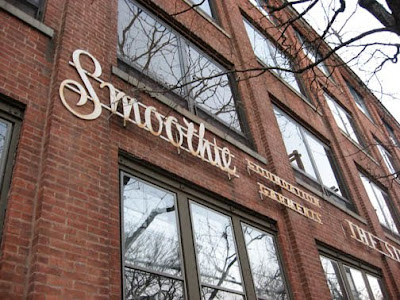 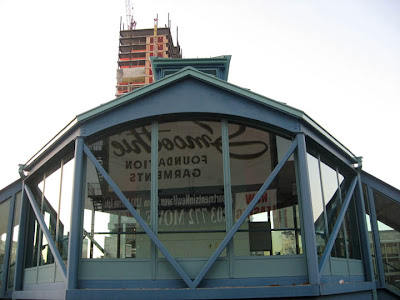 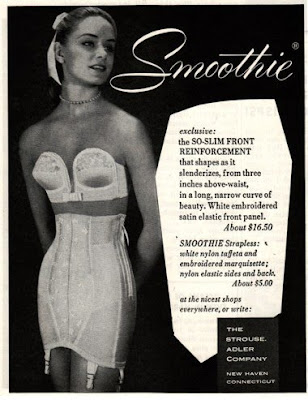 I love how the women in these ads look so nonchalant about wearing girdles around the house. 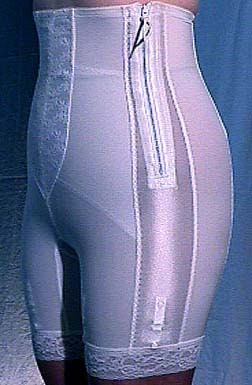 Ouch!
Today, a smoothie is a delicious frothy combination of fruit, ice and yogurt, but back in the era when women had to wear elastic torture devices to look good, a Smoothie was a top of the line girdle manufactured by the Strouse Adler Company of New Haven, Connecticut. Their factory first began cranking out unmentionables way back in 1860, and continued up until 1999 in the same brick building until they were forced to do some, er, belt-tightening and move the operation off-shore. Savvy real estate developers wasted no time converting the building into luxury apartments with a funky SoHo feel. And instead of being embarrassed by selling urban hipsters flats in a former girdle factory, they embraced it. A fabulous, huge "Smoothie" sign has been repainted on the side of the building and can be seen from miles away, just as it could in its hey-day. And wonderful original metal Smoothie script logos still adorn the other sides of the building. It's a cinch to see what a waist it would have been if the developers didn't have the guts to keep the girdle theme going, and that's not stretching the truth.
Posted by Gunnar and Sherry at 2:17 PM

I find it painful to even look at a girdle the Monday after Thanksgiving weekend, but I'd love to check out that building some time- thanks for the heads up!

Great abdominal support! Wish they would remove the stretchie ad and reveal what may be behind. Sorry about the double entendre! Best, Frank

That skill shape transferred using down the family has almost ended up missing, along with by keeping these customers additionally one sustain the ability. These running watches tell not only for moment; they were stipulating knowledge, grace, as clearly as stature mum and dad with ones own recognition. You can now possess a luxurious watch, but running a antique savings Breitling Replica Watches account watch Replica Hublot watches allowing replica Swiss Valjoux 7750 watches you to a infrequent connoisseur. Considering of finding a different observe? You buy knockoff Christian Dior may have determined everything that want to get? Have one been weary of the common watches? Do you want to one item exclusive? best replica Breitling watches UK If the court case, then it vintage back pocket observe is designed for anyone.