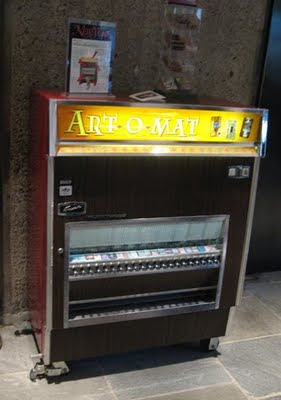 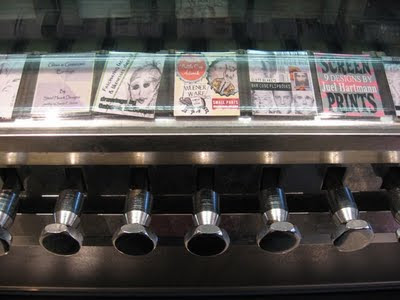 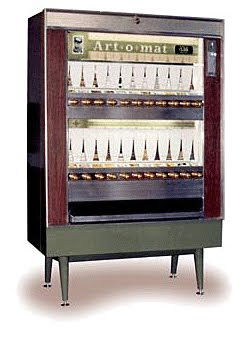 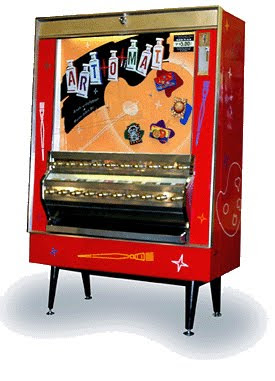 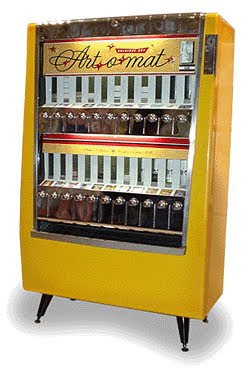 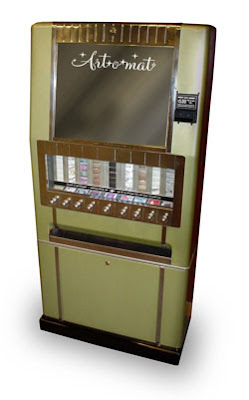 There are 82 Art-O-Mat machines around the country and each have their own distinctive retro graphics. The machines feature art from 400 artists from around the world. 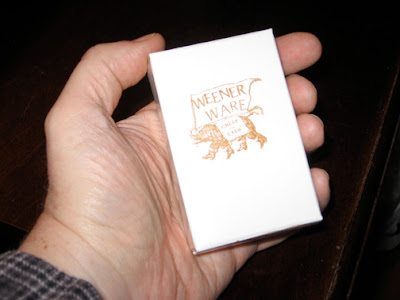 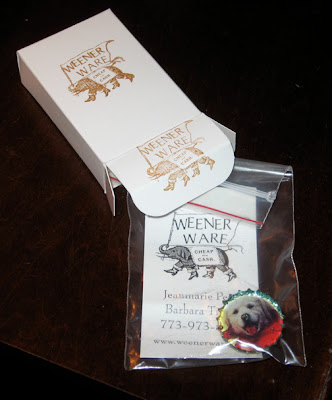 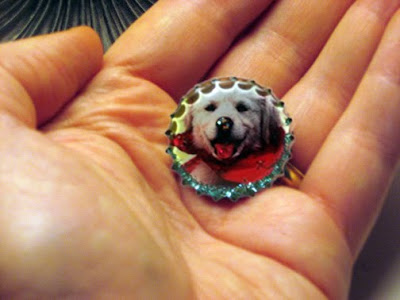 My selection was a distinctive pin from Weener Ware. Cool!
I took Mom to see the Georgia O'Keeffe exhibit at New York City's stupendous Whitney Museum of American Art last weekend. Very impressive. But what really caught my eye was an unusual contraption on the bottom floor next to the book store called the "Art-O-Mat". At first glance it looks like a cigarette vending machine from the '60s. Wow, I thought, a cigarette machine. When was the last time you saw one of those? Upon closer inspection it turned out to be an ingenious device for vending original art in cigarette pack-sized boxes. You buy a token from the cashier at the book store for $6.98 plus tax. You then put it in the Art-O-Mat's coin slot and make a selection of the "brand" of art you want. Little descriptive labels occupy the spaces above the levers that used to say "Marlboro," "Newport" and "Chesterfield." There's a thrill to pulling that nob all the way out and having your purchase fall in the trough below. My choice was from an outfit called "Weener Ware". Inside my fancifully festooned box was a decorative pin made from a bottle cap with a picture of a dog in it. Cool! The Art-O-Mat at the Whitney is one of 82 retired cigarette vending machines that have been converted to vend art in various locations throughout the country and there are around 400 contributing artists from 10 different countries currently involved in the Art-O-Mat project. Here's what the Art-O-Mat website says about how it all began:

The year was 1997, the town was Winston-Salem, North Carolina. Artist Clark Whittington was set to have a solo art show at a local cafe, Penny Universitie (now Mary's Of Course Cafe). This is when Whittington used a recently-banned cigarette machine to create the first Art-O-Mat. In June 1997, it was installed, along with 12 of his paintings. The machine sold Whittington's black & white photographs for $1.00 each.

This art show was scheduled to be dismantled in July 1997. However, Cynthia Giles (owner of the Penny Universitie) loved the machine and asked that it stay permanently and machine remains unaltered in its original location to this day. At that point, it was clear that involvement of other artists was needed if the project was going to continue. Giles introduced Whittington to a handful of other local artists and Artists in Cellophane was formed.

Personally, I thought the Art-O-Mat was really Kool. On a Lark, I'd walk a mile for one because you've got a lot to like and they've come a long way, baby. And I'd rather fight than switch.
Posted by Gunnar and Sherry at 8:10 AM

Great story. I love art-o-mats, I wish they were everywhere!

Thanks for the cool story! I saw the Art O Mat at the Whitney when we went to the William Eggelston exhibit last May (as part of our anniversary) and was fascinated.
I am psyched to find via the link in your article that there are supposedly a number of the machines here in PA. I sense the makings of an interesting roadtrip!

Thanks, Retromodgirl. I agree!

Betty: I, too, found out from their website that there's one right in my Providence backyard. Funny how you find out about stuff nearby by going far away!

Personally, I thought the Art-O-Mat was really Kool. On a Lark, I'd walk a mile for one because you've got a lot to like and they've come a long way, baby. And I'd rather fight than switch.

Why Art-O-Mat is not only counterproductive but abusive.

1. Art-O-Mat informs and reminds children that they can get away with obtaining and using tobacco product. It does not inform and remind them of anything else whatsoever and I am NOT wrong about this. Take a close look at what this is. It's a cigarette machine, which advertises the tobacco industry's history and continued success, by cleverly pretending to distribute ART!

2. Tobacco companies are now focused on the countries where they can get away with it, and marketing directly to children. If you need citation on this just type Indonesia Smoking Kids into YouTube or view this video specifically: How Indonesian Kids Are Getting Hooked On Cigarettes https://youtu.be/fM9t3hub6yg

3. Convincing hundreds of people to play along with an abusive mind game involving children is disrespectful to say the least, and donating a quarter of your personal profit margin to an elementary school doesn't compensate. If this guy had any integrity he would donate all of it, and abandon the activity immediately.

4. Art is just another vice. If you're having trouble understanding and agreeing with this, remind yourself of the source. Where did you get it? A vending machine? That in itself requires no further inquiry, such as why and wether it's because someone else did it and you heard the cellophane crinkle.

5. Demoting yourself by saying you hope your activity doesn't backfire shows that it both will and should. Someone who says that makes it obvious they're not where they need to be.

6. Throwing gang signs isn't showing that you own your power. It doesn't even show that you're a mature adult. Get out of my art gallery with that garbage. Go to where people do that and do it there

7. Art-O-Mat was not created by it's current manager in response to a Pavlovian reaction to a snack wrapper. It was created by a cigarette addicted minor experiencing Pavlovian calls to actual cigarette wrappers, as a bad joke and sting on capitalism while under the influence of the illegal psychedelic drug psilocybin, with help from a cocaine addicted illegal Mexican immigrant who got the cocaine he was high on when he and the kid shook hands on this idea directly from Klaus Nomi and David Bowie who happened to be in town. The date this occurred was new year's eve of 1992. These two individuals names are Sebastian Matias and Emmanuel Teijeiro, who created both Art-O-Mat and Artists In Cellophane by name, before altering his own name to match that of the owner of Beef Burger Corporation in New Jersey so that the guy who manufactured and distributed meat to every fast food chain you can think of no longer owns the monopoly on his own identity.

8. Clark reported that some children pointed out that there were still cigarettes in his vending machines to a dj on npr. He is in fact aware of the truth of this, but he thinks he's "in on it"

1 in 50 Indonesian children start smoking at age 4. Support our cause by sharing this message with at least one person to spread awareness and force an asap Art-O-Mat shutdown.

9. Anyone else notice how Art-O-Mat media is closed to outside input like open comment threads? You can't hide from the internet, chump. And we can all see you on the street.

Are you paying more than $5 / pack of cigs? I'm buying high quality cigarettes over at Duty Free Depot and this saves me over 70% on cigarettes.