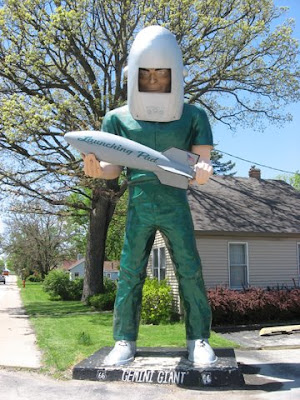 I want to live in that house! 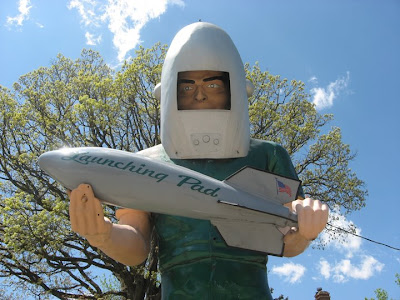 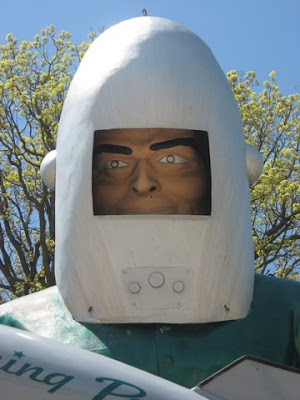 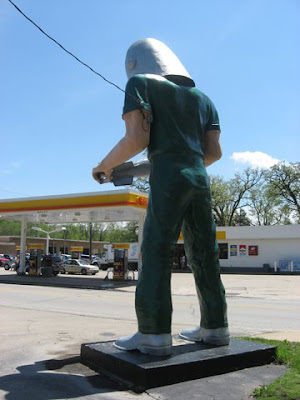 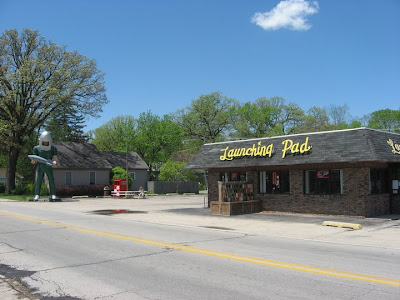 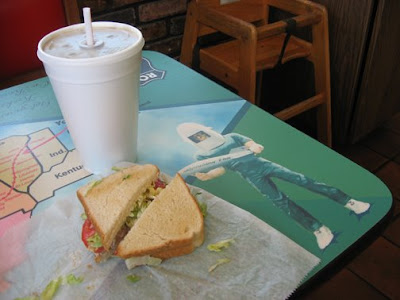 The tuna salad is, you guessed it... out of this world!
We've had the pleasure of seeing a few Muffler Men in our travels, but I think my favorite so far has to be the Gemini Giant of the sleepy town of Wilmington, Illinois, an hour or so south of Chicago. A Route 66 icon, he stands watch over the Launching Pad, a pleasant eatery and a favorite among locals and Route 66 nuts alike. Done up in futuristic (for the 1960s) green, wearing a space helmet and holding a rocket ship with jaunty "Launching Pad" script on it, he is arguably the most altered of all the surviving Muffler Men that grace our fair land. And he evokes a special time in America, when everybody cared about the space program and satellites and rocket ships were going to prevent wars, disease, and poverty. We had some nice sandwiches and french fries here on a lovely spring day. Do the locals know how lucky they are to be in the midst of eccentric roadside royalty every day?, I wonder. And how does the homeowner next door like looking out on the Giant's backside? If I lived there I'd cherish every moment. The "Pad" started out as a dairy bar in 1960 and acquired the Giant and a space-aged identity some time later. I noticed on the Internet that it had been up for sale in 2006, but it seemed to be alive and well just recently. Let's hope they keep boldly going where no (muffler) man has gone before.
Posted by Gunnar and Sherry at 7:46 AM

Nice review and the sandwich looks great. I'm with you guys - having the Gemini Giant standing in our front yard would be an honor.

+1 on loving the idea of seeing him out your window each day!

I hope to see the Gemini Giant first hand, one day. Thanks for taking the time to share your pics and words.

Thanks, Fuzzy. You must make the pilgrimage!

I used to work here.