What, me worry? The happy halfwit Muffler Man of Winslow, New Jersey 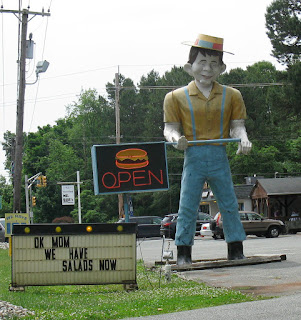 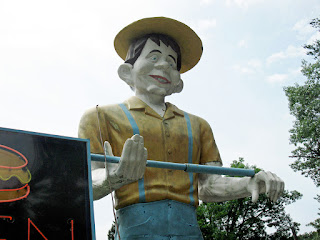 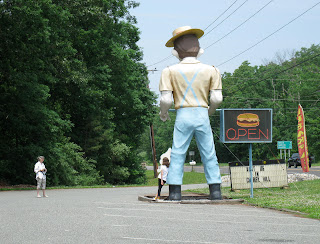 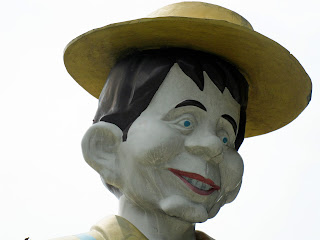 An homage, a distant relative, or an incredible coincidence... 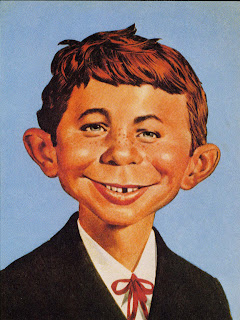 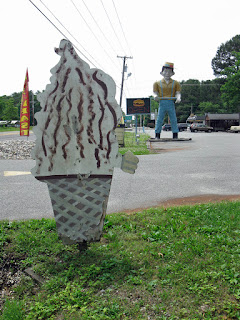 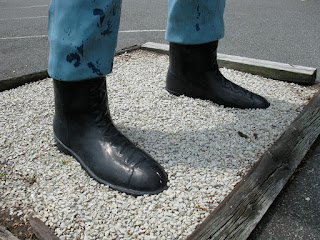 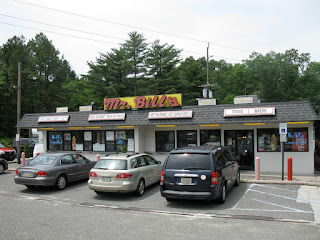 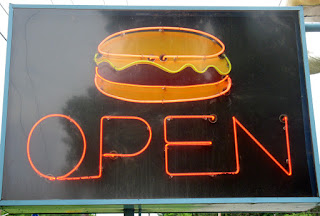 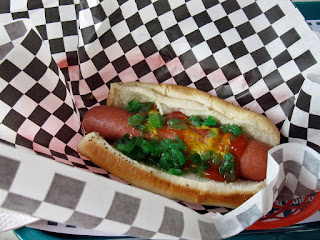 There's an old-fashioned drive-in restaurant in southern New Jersey with a great mascot out front to lure in hungry beach-goers and locals to try the pastrami cheesesteaks, homemade onion rings and custard eclairs. A 3-story former Muffler Man with a face that's a dead ringer for Mad magazine's Alfred E. Neuman proudly stands watch in front of Mr. Bill's Coney Island Drive-In on Route 73 in Winslow, just off the Atlantic City Expressway. Mr. Bill's has been a South Jersey institution for over fifty years, and offers an authentic retro vibe where Richie, Potsie and Ralph Malph would feel right at home. When the drive-in first opened, its owner, Ray, named the place after his father-in-law, Bill. It was also Ray who purchased the Muffler Mad-Man and made him Mr. Bill's' master of ceremonies, getting the attention of eccentric roadside attraction fans ever since. Categorized as "happy halfwits" by the Muffler Man aficionados at roadsideamerica.com, they are a rare mutation of the more common Paul Bunyan MMs, with similar bodies but heads of a more, shall we say, moronic nature. Which brings to mind a sage quote from Mr. Neuman himself: "It takes one to know one -- and vice versa!"
Posted by Gunnar and Sherry at 7:00 PM

Maybe it's the hat, or the halfwit reference, but it reminds me more of Mortimer Snerd.

The information in this article is incorrect. Mr. Bills was built in the early 60s by William Melvin Baker. Before art 73 was paved. It was originally Bills Drive In. Named after himself and his son. I know this to be true for I am his granddaughter. If you are going to post history you should post it correctly with the correct facts. "Rays ownership was a settlemen nothing more and had no part of its original creation". Maybe it would be nice to give credit to its creator and not be so hung up on some rediculouse statue that has nothing to do with this iconic landmark. Thank you. Signed Tracey Baker granddaughter of founder.

Thanks for the updated info, Tracey. No offense intended. Truth be told, though, it was the delightful "rediculouse" statue that got us off the road to enjoy the place!

FYI - My husband and I just purchased Mr. Bills. It had been closed for almost 2 years and our goal is to have it opened by mid June. We are have the statue repainted this week and working hard inside the restaurant to make it sparkle. Just wanted to share this! Thanks! Cheryl Ernst Our FB page is Mr. Bills of Winslow Twp if you would like to check it out. I don't have my website ready yet. Please feel free to come and visit us!!! Thank you for the history lesson Tracey Baker. My husband was born and raised in Philadelphia and when he was a youngster, if he was a good boy, his parents would stop and get him ice cream on the way to the shore. That was when it first opened and had an out house!!! We are so happy to continue the tradition of this iconic South Jersey restaurant.