Black and white and dead all over: Emperor, the penguin of Little America, Wyoming 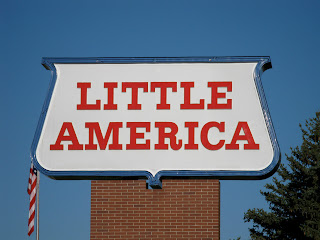 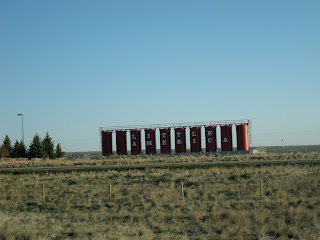 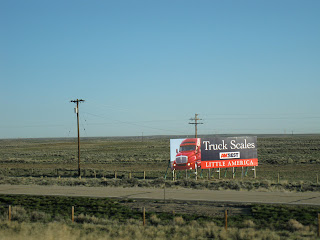 Little America is one of those places that put up billboards for miles and miles along the flat landscape before you get there. Love places like that. 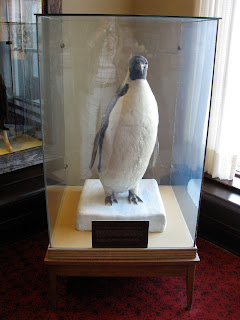 Emperor the penguin greets visitors in the lobby of Little America. 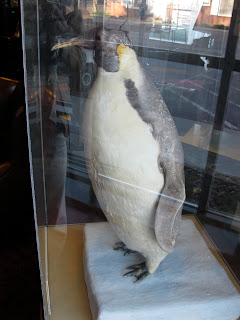 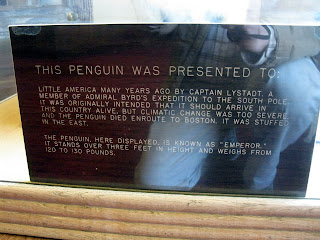 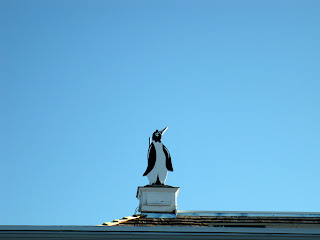 They make the most of the incongruously delightful penguin motif.

Back in 1932, an entrepreneur named S.M. Covey opened a way-station for travelers along the Lincoln Highway 60 miles east of the Wyoming-Utah border, and since the area was rather desolate, he named it Little America, after Little America, Antarctica, Admiral Robert Byrd's barren South Pole outpost. In keeping with the arctic theme, Mr. Covey requisitioned a Mr. Isak Lysad, a member of byrd's expedition, to bring back a genuine living arctic penguin as his business's mascot. Unfortunately, on the trip between the two Little Americas, the bird perished before it could waddle on the Wyoming high plains. Undeterred, Mr. Covey had the bird stuffed, named him Emperor, and put him in a glass case in the main lobby, where he's been residing since the 1940s, as close as anyone can guess. A lot of Little America has changed since the early days: the Lincoln Highway is now Interstate 80, Mr Covey sold L.A. in 1963 to new owners who expanded it into a chain including a 5-star hotel in Salt Lake City, and gas has gotten a lot more expensive. But Emperor still sits in his glass case, as if to say "What are you looking at?" to the tourists who come by, many of whom are adults who saw him back when they were kids. And he's got his formal wear on just for the occasion.
Posted by Gunnar and Sherry at 10:45 AM

They should rename it "K.G. Bird", in honor of Batman, of course. Or, "Cut Me, Mick" would work, too