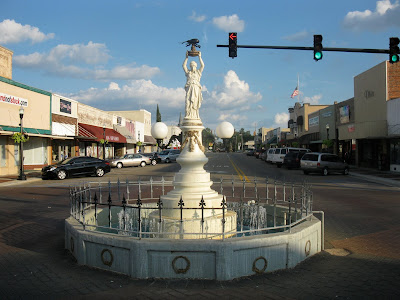 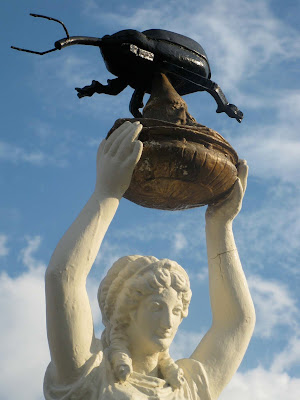 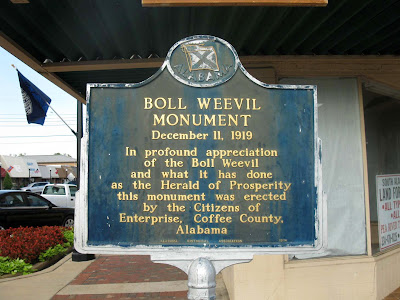 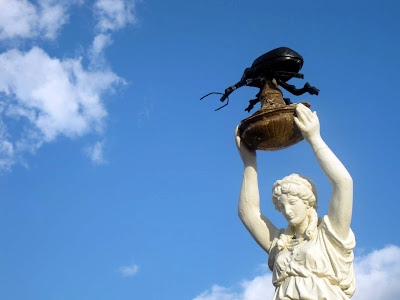 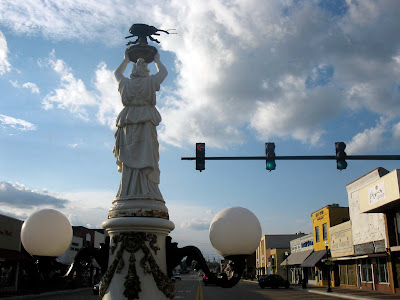 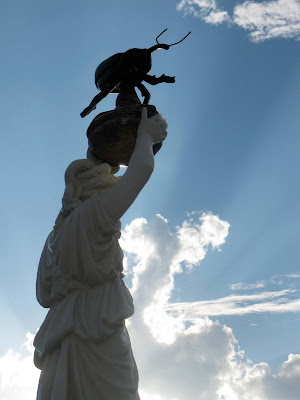 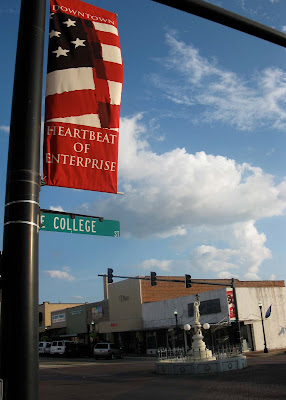 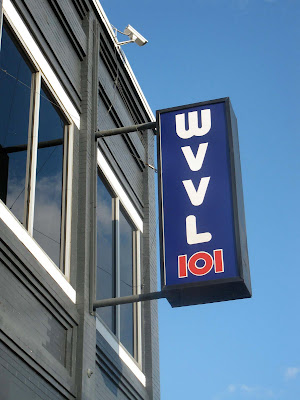 The local radio station, WVVL, has its headquarters overlooking the monument. 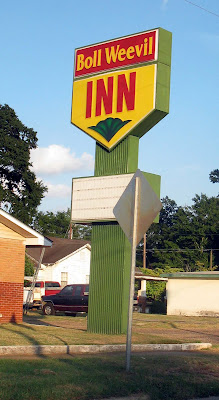 Everybody gets into the boll weevil act in Enterprise. 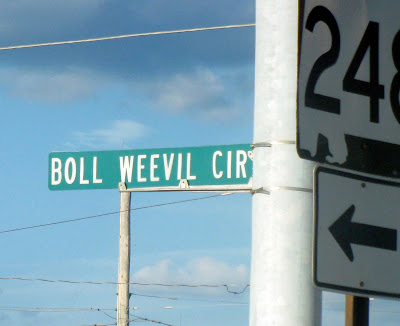 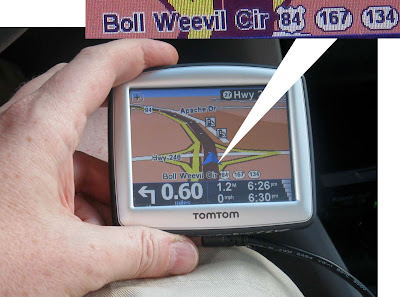 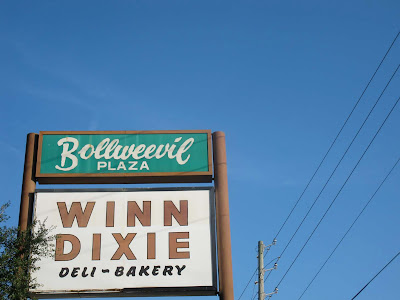 Enterprise's major thoroughfare is called Boll Weevil Circle, where you'll find Sears, Wal-Mart, Comfort Inn, Office Depot... you name it.
It's not often that a town feels it owes its prosperity to an insect pest, and even rarer to find one that erects a statue in the center of town in its honor, but that's what the good folks of Enterprise, Alabama did in 1919. The southeastern Yellowhammer State town was founded in 1881 and its chief crop and source of revenue was cotton. This all changed in 1915 when a devastating infestation of boll weevils destroyed the cotton crop, forcing the nearly bankrupt farmers to diversify into other crops or starve. Within a few years, the region became the top producer of peanuts in the nation and the community was saved. To memorialize this colossal act of making lemonade out of lemons, Enterprise installed a 13-foot classical-looking stone statue of a robed woman with her arms extended upward, surrounded by a circular fountain at the intersection of College and Main Streets, the heart of the town's business district. Thirty years later, a Mr. Luther Baker thought it odd that the Boll Weevil Monument didn't have a boll weevil on it, so he created a many-times larger than life version of one and put it at the top of the monument, apparently with the town's blessing. Often the victim of pranks, theft and vandalism, the original statue was removed and put in the town's nearby Depot Museum in 1998 and a polymer-resin replica was put in its place, where it still sits today. Words cannot do justice to the eccentric awesomeness of this memorial: it looks like a cross between two 1950s movies: a Biblical epic invaded by a low-budget mutant insect picture. Cars pass by nonchalantly, perhaps oblivious to how wonderful this truly is. So here's to you, Enterprise: we're bolled over by your weevil genius.
Posted by Gunnar and Sherry at 3:29 PM

"we're bolled over by your weevil genius"
You always rock the puns :)

Great post and I've never seen close-ups of this before!

Wish I had gone there on my trip through Alabama last month! Great post!

Wendy: Thanks for the compliment. Lots to work with here: Axis of Weevil, The Weevil Empire, a necessary weevil...somebody stop me!

Rick: Thanks! I meant to comment on your Alabama posts to say I would be cruising through the state soon myself. Great roadside bloggers think alike (and so do we)!

Enterprise is a great place to live and raise kids. Super school system.

What an interesting theme to have for that small town.