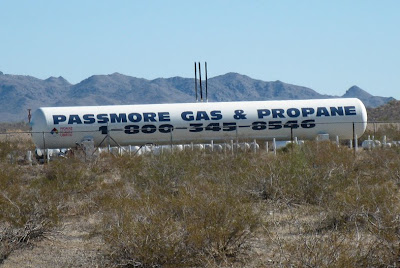 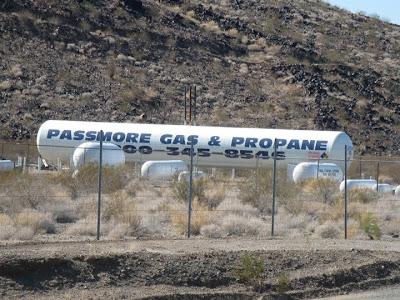 So close, yet so fart. 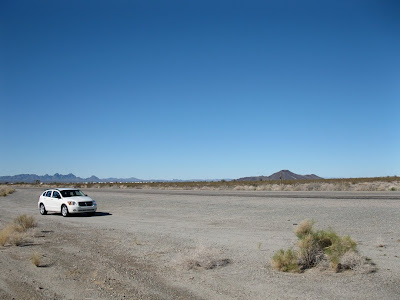 A mighty wind blows across the desert near the Passmore pass.
We're suckers for anything the least bit immature and idiotic when it comes to humor, so a detour had to be made on our last trip to see the fabled Passmore Gas & Propane tank between the towns of Hope and Salome on Highway 60 in southwestern Arizona. The landscape is beautifully desolate as we rip up the higway without another car in sight and then, off in the distance, could it be? Yes, I believe it is... a large oil tank with a poop joke painted on its side. An internet search reveals little about this company. There is a Passmore Gas & Oil company in Blythe, California, across the state line on I-10, but we're not sure who's the big cheese. And, who knows, this could just be a wild coincidence. There very well could be a family named Passmore that, in a flatch of inspiration, just happened to go into the gasoline business. It could happen. Who are we to pooh-pooh that theory?
Posted by Gunnar and Sherry at 5:40 PM

This kind of roadside stuff is the coolest. Its what America is all about. Have a safe trip.

Thanks, Richard. I agree, these are the "funnest" things to see!

Passmore Gas & Propane is NO joke. The owner's name is Randall Passmore, they have a location in Blythe, CA and Lake Havasu City, AZ. They deliver propane and GASoline to homes and businesses.I should know, I was customer service rep.

Thanks for the inside poop, Anonymous...that's awesome! Did any of your customers ever give you a hard time about the name?

YES! You should see the laughs my resume gets each time they read that line.

All the time and that employment on my resume always get a laugh.

I just got a new job and discovered the Blythe location is one of our clients. I really thought it was a joke.

Thank you so much for sharing this blog.
propane gas company newaygo county mi