What will it take to put you in this Carhenge tonight? 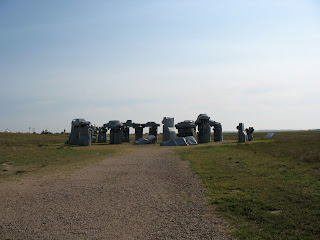 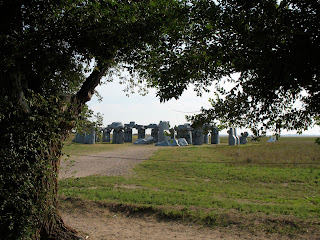 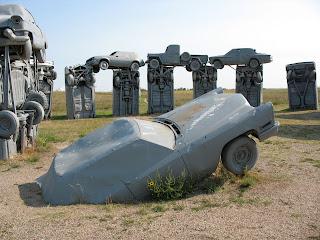 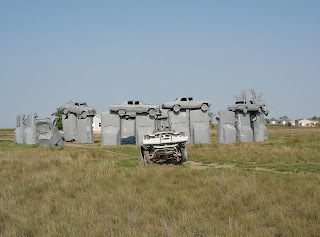 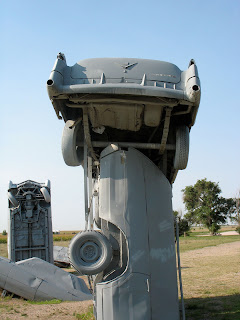 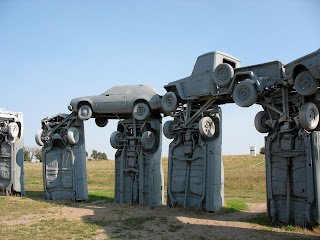 You can make out an AMC Gremlin here... 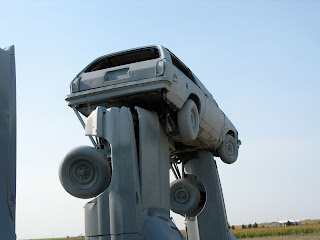 ...and a Chevy Vega station wagon here. We had one of these back in the 70s and it's of more use here than it was back then. 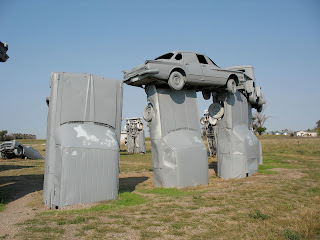 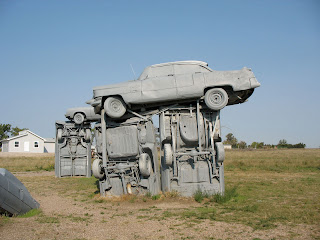 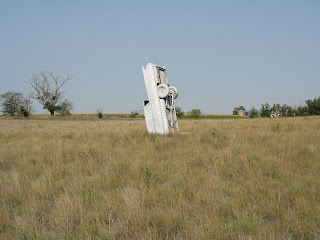 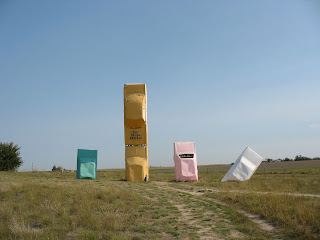 "Ford Seasons", for all of you Vivaldi fans 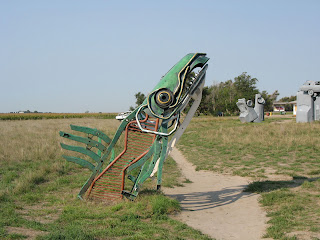 I would put Carhenge -- Alliance, Nebraska's recreation of Great Britain's Stonehenge made out of old cars -- at the tippy top of our list of the very, very best, most eccentric roadside attractions we've ever had the pleasure to mosey on by. In 1987, as a tribute to his late father, a Mr. Jim Reinders acquired 38 dead cars, spray-painted them gray and assembled them upright and across in a circle 96 feet in diameter (the proportions of its famous doppelganger) on his father's 10-acre plot of farmland. A 1962 Cadillac serves as the heel stone. 80,000 visitors have stopped by each year since its installation and admission is free, with donations kindly accepted in the honor box at the entrance. Additional sculptures have been erected on the property, including a large spawning salmon made of car parts and "Ford Seasons", made up of  four Fords and inspired by both Vivaldi's "Four Seasons" and the Nebraska landscape. The property has been maintained by the Friends of Carhenge, a nonprofit group originally formed to fight the city when they threatened to tear the place down after it was first erected. Trouble is, after all these years they can't afford to expand the site with the kind of development that could bring in more visitors and make it profitable, so last October they put it up for sale in hopes someone with deeper pockets will buy it and put a campground, ice cream stand, gas station and other commercial venues to keep the place going (I vote for a drive-in movie theater, but I'm no Warren Buffet). No word on if they've received any nibbles yet.

I absolutely adore this place. It was a real highlight of our 2006 cross-country trip, and that journey included no-slouch places like Yellowstone, Glacier and Arches National Parks. It really is a work of art, where the middle-of-nowhere landscape is as much a part of the art as the art itself. I couldn't get the Stanley Kubrick "2001" "Also Sprach Zarathustra" movie theme out of my head the whole time we were there. A long, two-hour, I-sure-hope-this-is-worth-it detour off an Interstate (in this case 80) has never been more worth it.


God (or whoever the head-Druid is) bless Carhenge. Let's hope somebody good will buy the place and keep it going. That would be good carma, for sure.
Posted by Gunnar and Sherry at 4:31 PM

I love this!!!!!
Funny thing is, there is a similar 'carhenge' just south of Port Perry, Ontario, Canada. It was built by Bill Lishman, the man whose story inspired that movie about the Canada geese... geez. I forget the name.. Fly Away Home. http://www.williamlishman.com/landscape.htm
Anyway, according to Wikipedia Lishman's Autohenge rusted and was torn down a few years back.
I was looking for images of A & W's mamaburger because I just realized I look exactly like her - and that's how I discovered your winsome and wonderful blog.

Hi Cathy, Thanks for stopping by. Sorry I never made it to that other Carhenge! Your blog is great, too and help yourself to any of the Mamaburger images we've got!

Oh no, they can't tear down Carhenge until I see it. I didn't even know about it until a few years ago we visited Nebraska and found out about it. We weren't able to make it then and visited the Ball of Twine instead because it was on the way home.

I guess we need to get to Nebraska soon!!

It looks like the Friends of Carhenge will keep taking care of it indefinitely, so you should be able to see it, at least for the near future, elf. Nebraska's awesome...we'd love to go back!