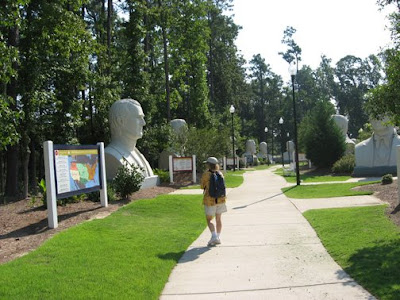 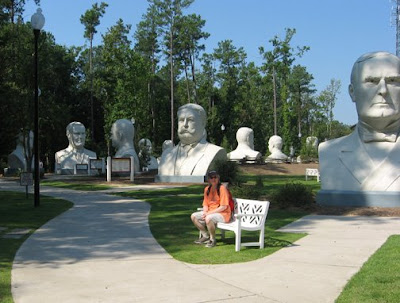 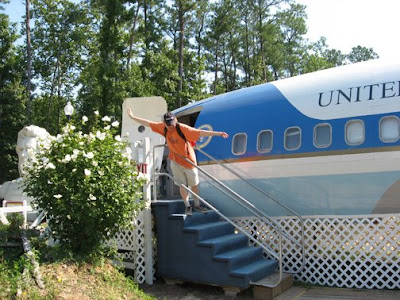 A hilarious Gerald Ford imitation outside Air Force One
Williamsburg, Virginia is best known for the college of William and Mary and Colonial Williamsburg, but it is also home to a gem among eccentric roadside attractions. Presidents Park is a beautifully landscaped garden setting off Interstate 64 that features 18-foot high white concrete busts of all the presidents except Barack Obama. The statues are the work of famed sculptor David Adickes, who must be one heck of a presidential history buff to take on such a project. At first glance the park looks like a presidential-themed mini golf course (now there's an idea...the Watergate water hazard around Nixon, the James K. Polk "Manifest Destiny" hole), but on further investigation it's a really nice, tranquil, educational, pleasingly nutty place. Each bust has a plaque with historical facts and they even have a chunk of one of the Air Force Ones used by the White House that you can go inside and poke around in. The park is nonpartisan: obscure presidents like Chester A. Arthur and Rutherford B. Hayes are equally represented here right beside Washington and Lincoln. Finally, a place where Democrats, Republicans, Whigs and Know-Nothings can comingle harmoniously. Here's their website: http://www.presidentspark.org/index.html

Posted by Gunnar and Sherry at 6:44 AM

Happy New Year to you and yours!